On this day: Manny Pacquiao blasts out Lehlo Ledwaba for IBF 122-pound title 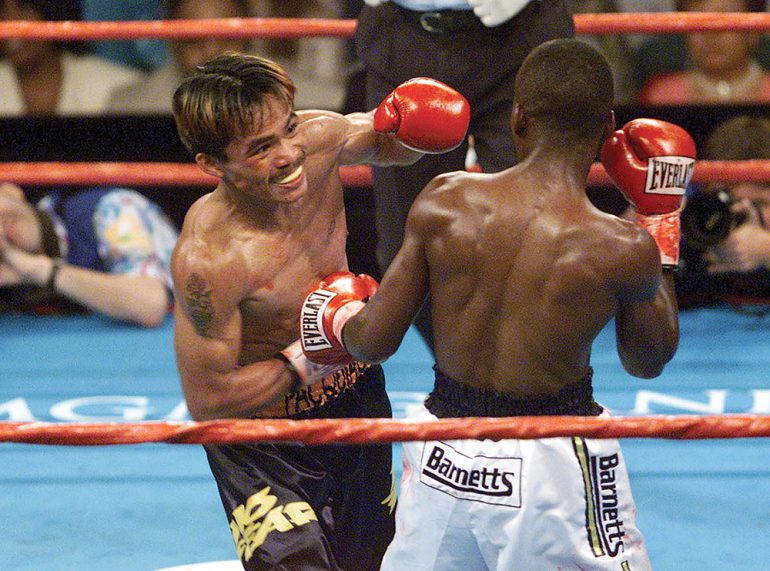 Pacquiao replacing Enrique Sanchez turned out to be the stuff of nightmares for IBF 122-pound titleholder Lehlo Ledwaba. (Photo by Jeff Gross/ALLSPORT)
23
Jun
by The Ring

It all began on an undercard at just two weeks’ notice.

On June 23, 2001, Manny Pacquiao wrenched the IBF junior featherweight title from Lehlo Ledwaba, battering the respected South African champ from pillar to post en route to a sixth-round stoppage at the MGM Grand in Las Vegas. The official time was 0:59.

The 32-2 Pacquiao had already captured a WBC title at flyweight and was known as a puncher. After seeing him in the gym, acclaimed trainer Freddie Roach sensed that the young Filipino was something very special and began to add layers to an already formidable arsenal.

However, Pacquiao was still unknown in U.S. boxing circles and entered the ring as a prohibitive underdog for his U.S. debut. By the end of the night, his name would be on the lips of hardened ringsiders.

Ledwaba never had a prayer. He was decked by a left hand in Round 2 and overwhelmed throughout. Pacquiao was at his devastating best and one of the most incredible runs in modern boxing history was underway.