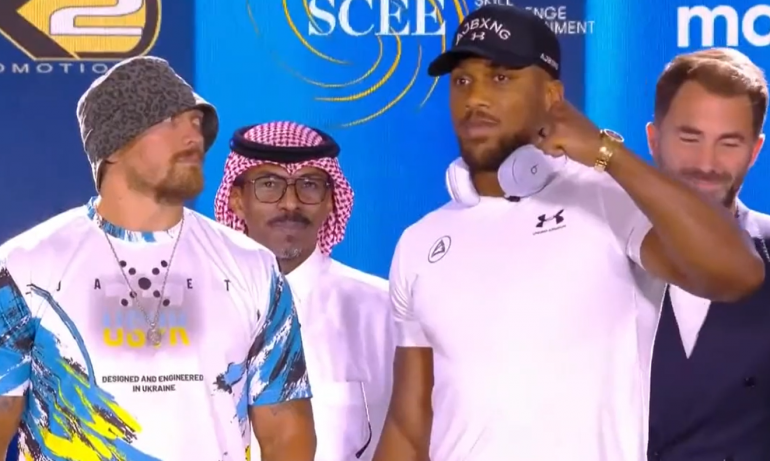 Unified heavyweight titleholder Oleksandr Usyk and Anthony Joshua came face to face at a press conference in Jeddah, Saudi Arabia, on Tuesday to announce their eagerly anticipated rematch which takes place in the city on August 20.

In their first fight, on September 25th of last year, Usyk boxed brilliantly to claim a 12-round unanimous decision at the Tottenham Hotspur soccer stadium in London. The Ukrainian technician used quick feet, angles and sharp punching to befuddle Joshua for most of that encounter. He also came close to scoring a stoppage in the closing seconds of the final round.

Usyk, who is rated No. 1 by The Ring at heavyweight, behind champion Tyson Fury, has spent a significant amount of time in his home country since the Russian invasion began earlier this year. He has been in training, however, and is looking forward to the Joshua sequel.

“It’s a big honor for me to be here,” said Usyk (19-0, 13 KOs), who is also a former undisputed cruiserweight champion. “As we all know, we are not in the best conditions back at home, but we’re doing everything possible to achieve our goal.

“I never make loud and bright speeches. All I do is work hard in training camp. That’s what I’m going to do until the day of the fight, and then I’ll enter the ring and make you happy with my boxing. The reason for my happiness is not my championship belts, but the fact that I have my family, my children, and a wonderful team around me.”

Joshua, who is rated No. 2 by The Ring, has made significant changes to his training setup since the Usyk setback. The former unified champ has hired Robert Garcia, who has replaced long-time coach Robert McCracken.

“The hunger is still there,” stated Joshua (24-2, 22 KOs), who avenged a seventh-round stoppage defeat to Andy Ruiz by outclassing the Mexican-American over 12 rounds. “Blips happen in life, but resilience, mental toughness and consistency will always prevail.

“We have to give credit where it’s due. I’m not a hater. I respect people, and I respect [Usyk’s] craft and what he’s achieved. If I’m around someone who is better than me on the night, then I have to motivate myself to be better than him. The important thing is I have a second chance. And if you know anything about my life, I got into trouble when I was a youngster and it was boxing that gave me a second chance.

“We’re still on the road to undisputed and [the first fight] was just a little blip on the road. I’m focused on the target, which is sitting over there. Usyk bust my ass for some rounds, and I have to take my defeat like a man. I hold myself accountable. I’m focused on the goal. God willing, I’ll perform and I’ll be three-time champion of the world.

“This is all very nice, it’s all very pleasant, but we’re only here to win,” stated Matchroom boss Eddie Hearn. “We’re here to see [Anthony Joshua] regain all these wonderful belts on August 20.”

As Hearn said, the press conference was “pleasant,” but the final face off became very intense. The fighters stared daggers at each other for several moments, ignoring requests to face the photographers, and it was Usyk who seemed the more amped up of the two.