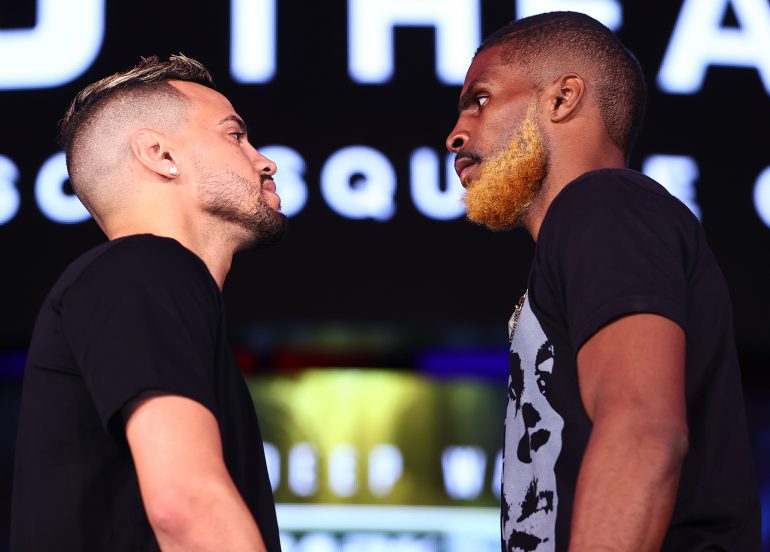 Robeisy Ramirez (L) and Abraham Nova (R) face-off during the press conference ahead of their featherweight fight, at The Hulu Theater at Madison Square Garden on June 16, 2022 in New York City. (Photo by Mikey Williams/Top Rank Inc via Getty Images)
18
Jun
by Diego Morilla

For all the talk about Cuban professional boxers being a highly technical bunch with too much influence from their amateur days, there is always a group of renegades who go for the one knockout punch instead of the powder-puff marathon.

Robeisy Ramirez feels that the time is now for the new blood in Cuban boxing to emerge and make a difference. And he’s ready to be part of it.

“Of course. I believe that a new generation of Cuban boxers is coming,” said the 28-year-old two-time Olympic gold medalist, in a phone conversation, days before facing Puerto Rico’s Abraham Nova at NYC’s Madison Square Garden. “Not only (Yoelvis) Gomez and me. There’s David Morrell, who became (WBA super middleweight tilist) in only (five) fights. There are a lot of young Cuban boxers that are not well known yet, but I know they have a completely different style that was spawned by my generation. They are a little bit younger but we already have that aggressive boxing style. We love working more to the body and engage in more exchanges up close. I do think that it’s about time for Cuban boxing to be part of the elite again.”

Ramirez’s attempt to reach the summit of the professional boxing world had a rough start, when he was defeated in his debut by Adan Gonzales to temporarily derail the lofty expectations placed on him by Top Rank. But Ramirez (now 9-1, 5 knockouts) is already counting that defeat as an advantage, both in experience and in placing him in good company with other all-time greats.

“I think it’s time to stop talking about that first defeat,” said Ramirez, bluntly. “That’s not going to mark my career. It’s simply a bad start, just as (Vasily) Lomachenko had it in his second fight, or Bernard Hopkins or Rafael Marquez. I believe that it is not something that will define me, just a bad moment. My mentality is not affected by a defeat, I just try to be better and better with each fight and move ahead in professional boxing.”

His next move will be just as tough as his debut. Puerto Rico’s Nova is a fellow rising contender with an impressive 21-0 (15 KOs) record, but Ramirez, who had a long and storied career as an amateur, is not impressed.

“Abraham Nova is a good fighter. He has a good record, and on paper it looks like we will have a good, even fight. I can’t tell you more about him because I don’t see a lot in him, but it’s a great matchup and we are going to give fans a great show.”

As far as feeling any fears of repeating the disappointment of his debut, Ramirez is certain that the lesson was well learned.

“What happened in my debut was lack of experience, coming to a country and a system that I was not accustomed to. I believe that’s not necessary to discuss again. But this fight it is not only a calculated risk, it is one more fight for me. I am used to fight any kind of opponents. And his unbeaten record doesn’t worry me because it is up in the ring where you see what your opponent is really about. A record is just that, a piece of paper in which you jot down anything you like, it doesn’t say whether you fought a quality opponent or not. It doesn’t worry me at all.”