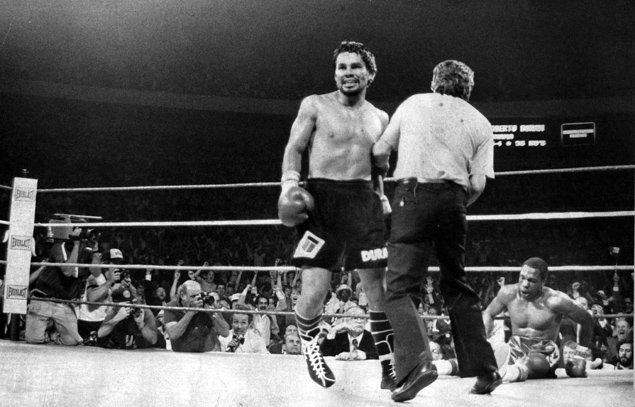 Duran decks Moore en route to picking up a third world title in as many weight classes. Photo by Ring Magazine/ Getty Images
16
Jun
by The Ring

It was Roberto Duran’s birthday, but it was he who provided his loyal fanbase with the greatest of gifts.

“Hands of Stone” turned 31 on June 16, 1983 and captured the WBA junior middleweight title courtesy of a punishing eighth-round stoppage of Davey Moore in an emotional, albeit savagely violent, night at Madison Square Garden. The official time was 2:02.

Duran, a former lightweight and welterweight champion coming in, was the underdog. The legendary Panamanian’s star had dimmed since his ignominious surrender to Sugar Ray Leonard in November 1980. Since that setback, there had been listless showings against unknown opposition and heartbreaking consecutive losses to Wilfred Benitez (UD 15) and Kirkland Laing (SD 10).

Moore, 24, was the unbeaten 154-pound champion. The Bronx native had knocked out Tadashi Mihara (KO 6) to win the title and had made three successful defenses: Charlie Weir (KO 5), Ayub Kalule (TKO 10) and Gary Guiden (KO 4). He was huge at the weight and literally dwarfed the challenger, who had turned professional at 119 pounds.

The clear advantage Duran held was in experience. This was his 81st fight in a 15-year professional career. Conversely, Moore has been in the paid ranks for less than three years and was entering fight No. 13.

It was a terrible mismatch, made worse by the fact that referee Ernesto Magana turned sadist. By the time Duran decked his prey with a huge right in Round 7, both of Moore’s eyes were almost swollen shut; blood poured from his mouth, and he’d absorbed a brutal body beating.

The young champion was in serious need of rescue.

However, another two minutes of horrific punishment followed as Duran went through the gears in the eighth. With the action in progress, furious members of the NYSAC, ringside media and fans yelled at Magana to stop the fight, which he finally did with an air of embarrassment. The official time was 2:02.