The Neutral Corner – Episode 318: A Week of Big Knockouts; Beterbiev vs Smith Preview and more 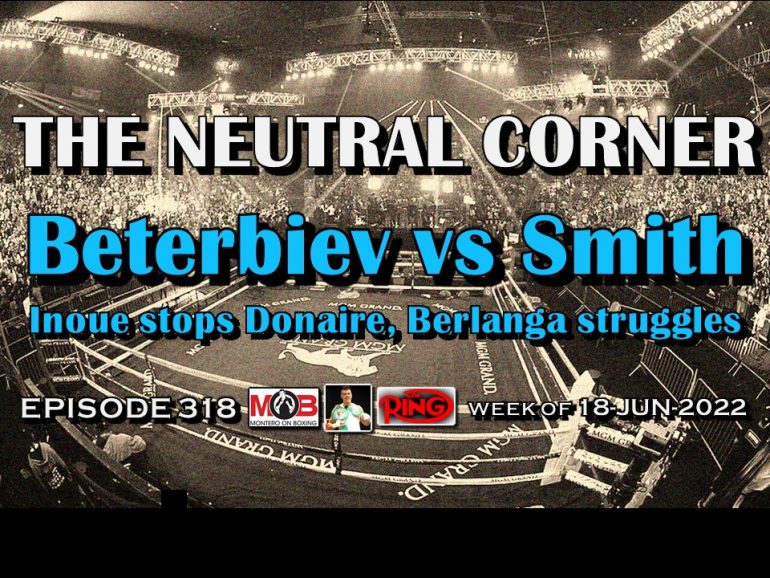 On episode 318 of The Neutral Corner boxing podcast, host Michael Montero gave his thoughts on another tragic ring death. On June 5 in his native South Africa, lightweight Simiso Buthelezi lost a fight in bizarre and concerning fashion. During the tenth and final round, Buthelezi knocked his opponent, Siphesihle Mntungwa, into the ropes with a combination. The referee separated the fighters, and then suddenly Buthelezi turned around, walked to the blue corner, and started literally punching at the air. The ref, sensing an obvious neurological issue with Buthelezi, immediately stopped the fight, awarding Mntungwa the TKO10 win.

On Tuesday, June 7 in Saitama, Japan, Naoye Inoue scored a TKO2 win over Nonito Donaire to unify 3 bantamweight world titles. Promoter Top Rank says they would like to match the “Monster” with Englishman Paul Butler, who holds the other remaining title in the division, next.

On Friday, June 10, Hiroto Kyoguchi successfully defended his junior flyweight title with a TKO8 win over Esteban Bermudez in Mexico.

On Saturday, June 11, there were three notable cards in the United States. In Miami, Florida, Daniel Dubois scored a KO4 win over Trevor Bryan. In Anaheim, California, Jaime Munguia scored a KO5 win over Jimmy Kelly. And in New York City, Edgar Berlanga scored a UD10 win over Alexis Angulo.