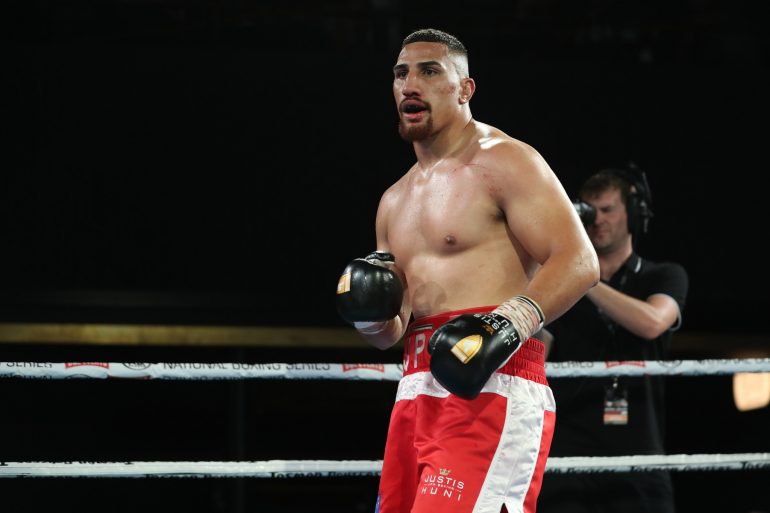 Last Thursday, the home of Australian heavyweight Justis Huni in Brisbane was shot at five times by unknown perpetrators during the early hours of the morning. Thankfully all 10 people at the address were unharmed.

This shocking event, which was reported by a throng of Australian news outlets, has taken place in the buildup to Huni’s fight with compatriot and fellow-unbeaten fighter Joseph Goodall, which takes place at the Nissan Arena in Nathan, Australia on Wednesday.

Huni remains focused on the task in hand, with local bragging rights very much on the line.

“It’s going to be an awesome fight for the Australian public and boxing fans to witness two of Australia’s best heavyweights go at it,” Huni (5-0, 4 knockouts) told The Ring. “I think we both have very decorated amateur backgrounds and we’ve both performed on the world stage.

“It will be a good test. I guess the danger I would have to look out for is his experience inside the ring. [It’s] definitely a tough fight, but I believe I have got what it takes to overcome Joseph Goodall.”

This will be the first time the 23-year-old Huni has fought in a year. He had aspirations of representing Australia at the 2020 Toyko Olympics but an injury curtailed those plans.

“After my last fight (10th-round stoppage over Paul Gallen in June 2021), I had an operation on my hand,” said Huni, who was sidelined for six months. “That injury ended my Olympic dream. The injury was on my right index knuckle, which had torn the cap that sits over my knuckle and tendons.

“I had time to have a break and refresh before getting back into the gym and getting into the intense training in preparation from my upcoming fight.”

Two-division titleholder Tim Bradley, who now serves as a commentator for ESPN, is a big advocate of Huni’s and feels that he has the potential to be a player in the heavyweight division further down the line.

“He’s very educated on the inside. A lot of heavyweights don’t know how to carry themselves on the inside; they’re a bit reckless. He knows how to operate inside the pocket and outside the pocket as well. You don’t see a whole lot of footwork in today’s heavyweights, but Huni has really good footwork. He tries to step around guys, making guys miss and making them pay.”

Goodall was a successful amateur, winning silver at the 2014 Commonwealth Games and bronze at the 2017 World Championships. He turned professional in 2018. Since then, the 29-year-old has remained unbeaten, taking his record to 8-0-1 (7 KOs). Goodall holds a win and a draw with Christian Ndzie Tsoye (UD 4/ D 6). Huni outpointed Tsoye (UD 10) in May 2021.