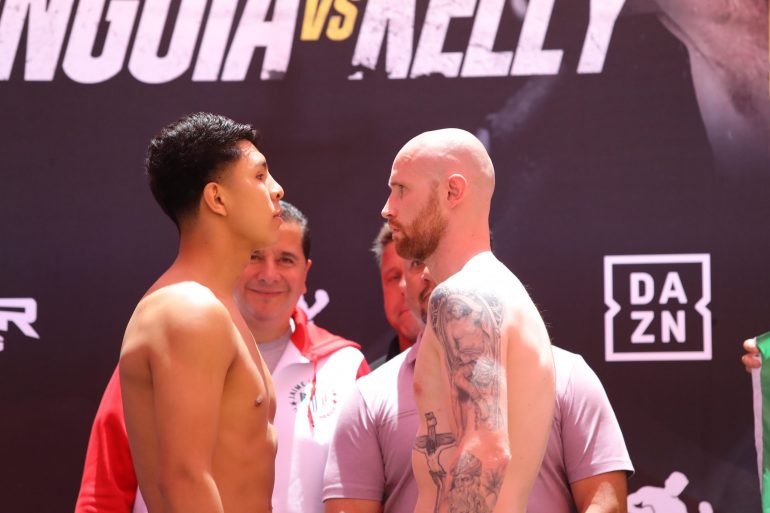 ANAHEIM, California. – Just when it looked like Jaime Munguia was in a rough spot, he relied on his power to swing momentum his way and pull out a victory.

Opponent Jimmy Kelly got off to a fast start but Munguia scored three knockdowns en route to a fifth round stoppage victory before a large and partisan crowd at the Honda Center.

Saturday’s clash against Kelly was fought at a contracted weight of 165 pounds. At Friday’s weigh-in, Munguia weighed in at 165 pounds. Kelly tipped the scale at 164 pounds.

Kelly, who was coming off a majority decision victory over Kanat Islam in his previous fight, on February 25, was effective early on against Munguia. He was able to utilize angles, slip punches and counter with left hooks to Munguia’s head. Near the end of the second round, Kelly landed a left-right combination, snapping Munguia’s head back.

While Kelly was able to connect repeatedly, he was also warned several times by referee Thomas Taylor for holding. Kelly continued to outbox Munguia, who looked puzzled at times despite receiving instructions in the corner from trainers Erik Morales and Fernando Fernandez.

Midway through the fifth round, Kelly was again warned for holding. After action resumed, Munguia hurt Kelly, dropping him to the canvas with a left hook to the head. Kelly beat the count and engaged in the center of the ring with Munguia but was dropped a second time, this time from a right uppercut to the head.

Kelly beat the count and tried to fight back but Munguia was relentless, letting go of his hands as he had Kelly backed up against the ropes. A barrage of punches dropped Kelly in a corner and, while he barely beat the count, referee Thomas Taylor saw enough and waved off the fight at 2:57.

Munguia recently fought at the Honda Center on November 13, defeating Gabriel Rosado by unanimous decision. In his most recent bout, on February 19, which took place in his hometown of Tijuana, Mexico, Munguia stopped D’Mitrius Ballard in the third round.

The 25-year-old was slated to face WBC middleweight titleholder Jermall Charlo this month but the fight fell through after a disagreement between Golden Boy Promotions and Zanfer Promotions, which promote Munguia, and Premier Boxing Champions (PBC) and Showtime. Golden Boy wanted DAZN, which has an exclusive deal with Golden Boy, to also stream the fight.

In a post-fight interview, Munguia believes the time to face Charlo, IBF/WBA titleholder Gennadiy Golovkin or any other top middleweight is now.

“Show some balls and fight me,” said Munguia, calling out Charlo.

“I think I’m ready for any challenge.”