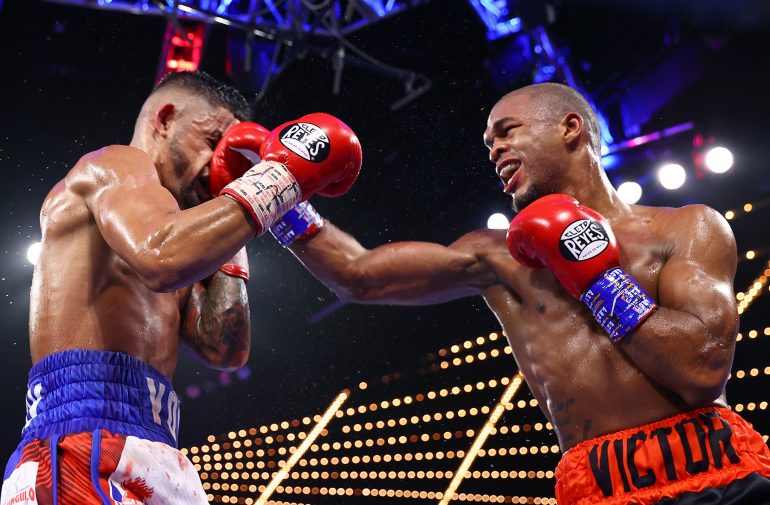 Two judges scored the fight 78-74, while the third had it 77-75, all to Santillan (12-0, 4 knockouts), a Dominican Republic born resident of Trujillo Alto, Puerto Rico.

Caraballo, who is co-promoted by Miguel Cotto Promotions and Top Rank, suffers his second defeat in three fights, having lost a similarly bruising bout against Jonas Sultan at the same building last October.

The fight started off in inauspicious fashion for Caraballo (15-2, 14 KOs), as he was cut over his right eye in the early rounds and rocked noticeably by overhand lefts from the southpaw Santillan.

Caraballo showed considerable heart, battling back to make it a fight in the second half of the fight.

The early advantage proved the distance in deciding the fight for the Ismael Salas trained Santillan.

Caraballo wasn’t the only fighter to lose unexpectedly on the Berlanga-Angulo card.

Vargas (20-3, 9 KOs) was fighting in his second bout since his first round stoppage loss to Jose Zepeda, and never seemed comfortable. The end came at the 2:06 mark after Vargas was knocked out of the ring. He climbed back in and was pummeled some more, with Vargas’ corner having to enter the ring to halt the bout.

Armani Almestica narrowly avoided being extended the full distance for the first time in his pro career, finishing off a game Eliseo Villalobos at 1:47 of the sixth and final round.

Almestica (6-0, 6 knockouts) of Orlando, Fla. scored a knockdown with a straight left hand at the end of round 1 and boxed his way to the advantage in the proceeding rounds.

Almestica, 20, hurt Villalobos with another left at the end of the fifth before an assault midway through the sixth convinced the referee to waive the bout off.

New York amateur legend Christina Cruz kicked off the card, winning her third pro fight, defeating Maryguenn Vellinga (3-3-2, 2 KOs) for the second straight time. Cruz won all three cards by the scores of 40-36 on two and 39-37 on the third.

Cruz holds the New York Golden Gloves record for most titles with ten.