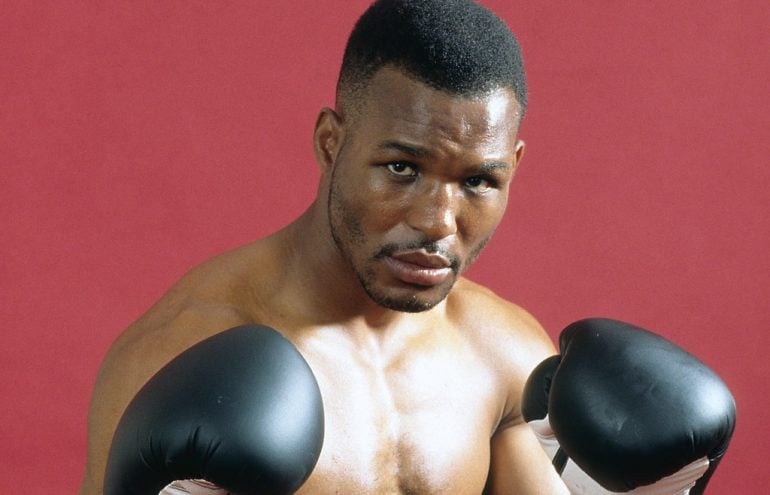 Bernard Hopkins poses for a Ring Magazine studio shoot conducted in the 1990s. Photo from The Ring archive.
11
Jun
by Joseph Santoliquito

CANASTOTA, NY—He didn’t want to believe it. He thought it would take a little time, though eventually, Bernard Hopkins would wind up in the International Boxing Hall of Fame.

It’s what the all-time middleweight great felt a few years ago. He would joke, “I pissed too many people off for them to let me in there. That time will come. I’ll get in some day.”

Try the first time he was on the ballot.

Hopkins became a first-ballot inductee after building a 55-8-2 record, with 32 knockouts over an amazing 28-year career that spanned four decades. He fought until he was 51.

He was The Ring’s and everyone else’s universal choice as 2001 Fighter of the Year coming off his star-turning victory over Felix Trinidad at Madison Square Garden three weeks after 9-11.

One of Hopkins’ signature victories was his stunning stoppage of previously undefeated Felix Trinidad.

Hopkins’ 2019 class of inductees also included his good friend, former Philadelphia Daily News boxing writer Bernard Fernandez, along with the largest class ever, due to the COVID-19 pandemic cancelling the IBHOF ceremonies in 2020 and 2021.

Because the IBHOF reduced the waiting period for eligibility from five years to three, Hopkins’ induction in 2019 was a foregone conclusion to everyone—except him.

“You sometimes don’t know how these things work and I’m someone who doesn’t really believe it until I see it,” he said. “When I got the call a few years back, I was kind of surprised. I think what caught me was how much people valued my career.

“I’m happy they changed the rules from five years to three years, because I’m still on this side of the dirt. I’m also happy my man Bernie Fernandez got in, so he’s going in with me. That’s great the two of us are going in at the same time. Bernie covered my entire career. He’s a good man and a good friend.

“I have to thank guys like Bernie, and a lot of guys in the media who respected me, even though a lot of times they might not have always agreed with me during my career, for this honor. This is the main course. I was inducted in Atlantic City and in Las Vegas. No disrespect meant to them. Those were great honors, but this is the main course.

“This is a little surreal. I don’t believe in luck. I believe in hard work and commitment. I believed in myself, when the world didn’t believe in me. I’m not surprised by this. I’m a little subdued by it. In life, as I get older, I’m learning to have a lot of gratitude for all of the things that I’ve gotten in my life—and boxing is the reason why.

“I was in prison. Everyone knows my story. It is a book. It is a movie. They’re working on a documentary about my life. This is a great honor. This is something that I owe to my past. If I didn’t go through the things that I went through, if I didn’t learn from the mistakes that I made, I wouldn’t be where I am now.

“When you’re in prison, you have two choices: Keep on going in that direction and stay in prison—or die—or change. I changed. Boxing changed me. This is my page in a book that will now have a legacy. But I was serious earlier, because there were some bridges I burned, and I know there are people that I pissed off.”

Because of the large class, everyone induction speech is limited to three minutes. Try telling that to Hopkins.

“Really, three minutes for me, it’s not going to happen,” he said, laughing. “Everyone better bring their pillows. It’s going to be a long stay.”

When Hopkins’ name first appeared on the IBHOF ballot in October 2019, he said, “I hope I get in before I’m dead.”

“Yeah, I thought that,” he says today. “I see the way people react to me today. I still have to get used to it. I get called a grumpy old man a lot of times, and that’s because I act like one. I’ve had a lot of good things happen in my life. And I’m grateful for that and the people who helped me get there. Yeah, you can say I’ve been on the top of the mountain for a long time.

“But in my mind, I’m still the guy at the bottom of the mountain digging ditches. There’s still a fight out there. I still have a lot of things to do. When I heard about the Hall of Fame ballot, I actually thought some people would look for ways to keep me out. I guess that’s my personality and chip on my shoulders that I always carry. I believe I’ll be voted into the Hall of Fame by split-decision. I’ll get in by the skin of my chinny, chin chin.

“It just reminds me that I came from J Block. I know my prison number backwards and frontwards, but I don’t know my social security number.