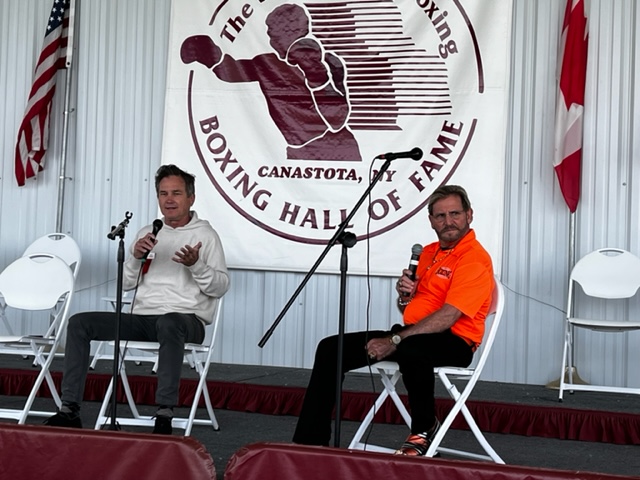 Day two of the International Boxing Hall of Fame saw fight fans in their hundreds flock to the hallowed grounds of Canastota.

Former lightweight champion Sean O’Grady opened proceedings in an interesting interview (ringside lecture) with James ‘Smitty’ Smith. O’Grady talked about his big fights and spoke of his life after boxing, owning and working on the commercial side of a real estate business.

“I just want to apologise to all of the people I punched in the face,” O’Grady joked.

He said he had wanted to fight Ray Mancini and Sugar Ray Leonard and paid tribute to Hilmer Kenty for giving him his opportunity at the WBA title. “I thank Hilmer Kenty because he gave me an opportunity, he gave me a shot. My dream was to be a world champion boxer.”

Roy Jones Jnr was next up for ‘Smitty’s’ questioning, and some questions from the fans. Jones gave around an hour of time, telling the crowds that James Toney was the best he faced and that he had wanted to fight Dariusz Michalczewski but that it made no sense for him to do so because he had seven belts at the time and Michalczewski had one. “I got robbed in the Olympics and disqualified at home,” he said of the possibility of going to Germany to face the long-reigning WBO champion. “I didn’t need to go over there for just one belt.”

Unbeaten super-welterweight Sebastian Fundora was also up on stage to face questions and the traditional Friday fist-casting took place, with the likes of Shane Mosley, Juan Manuel Marquez, Terence Crawford and Ann Wolfe all getting involved.

Also on the grounds, Iran Barkley and Ivan Robinson were on hand, as were referees Kenny Bayless and Tony Weeks, and Antonio Tarver and Miguel Cotto could be seen at various times among many, many other boxing personalities.