Bakhodir Jalolov shines for the stars on ShoBox 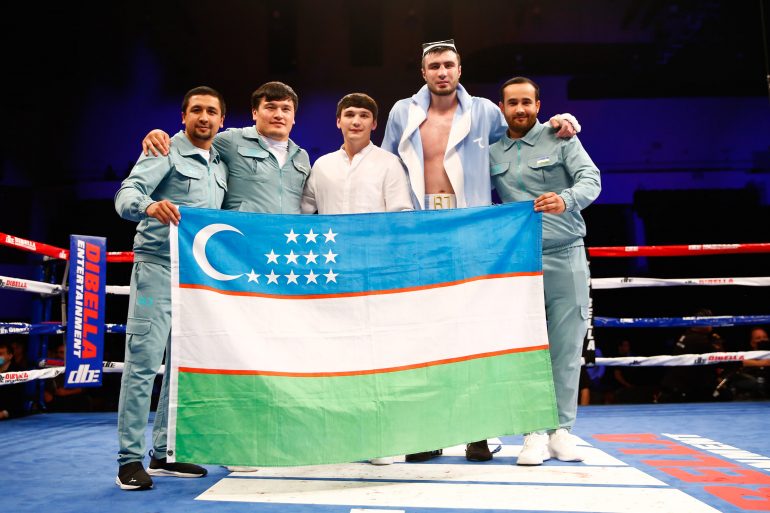 It was Hall of Fame weekend up the road in Canastota, New York, and Bakhodir Jalolov, the two-time Uzbekistan Olympian and 2020 Olympic gold medalist, was looking to show he may one day be heading there himself.

Another step in that progression came against Jack Mulowayi with an eight-round knockout in the main event of SHOWTIME’s SHOBOX: The New Generation.

“We knew this fight might go the distance and I’m happy that I could finish it earlier,” Jalolov said through an interpreter.

Jalolov looked tentative in the first round. The 6-4, 242-pound Mulowayi seemed content on standing there and doing as little as he could. In the second, Jalolov was more aggressive, attacking with overhand lefts. Mulowayi did little to resist.

KO TO CLOSE THE SHOW 💥@BakhodirJalolov knocks out Jack Mulowayi in the final round to remain undefeated! #SHOBOX pic.twitter.com/s8fVd37P8I

Jalolov nailed Mulowayi with a straight left in the second, and Mulowayi went down, though referee Benjy Esteves called it a slip. Mulowayi, again, was not doing anything to cause Jalolov to stop coming at him.

The times Mulowayi was aggressive, that came in tepid jabs and weak attempts at power shots. Jalolov had Mulowayi in some trouble in the last minute of the third, beginning with straight left to the face. 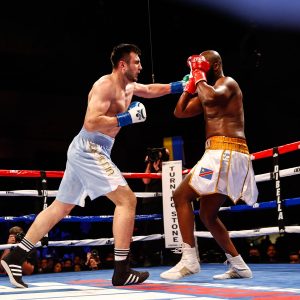 In the fourth, Jalolov got himself in a little trouble. After Esteves warned him about holding, he held again, forcing Esteves to take a point from Jalolov with :08 left in the fourth for excessive holding.

“Don’t do that,” Esteves told Jalolov.

In the sixth, Jalolov challenged Mulowayi to come at him as they stood in the middle of the ring. Mulowayi still did nothing. Jalolov landed an overhand left in the last minute of the round, and in the last :05 of the round, Jalolov plowed a blunt left off Mulowayi’s chin, sending him the canvas.

Jalolov kept landing the left. And Mulowayi was not able to get out of the way by the seventh. With :30 left in the round, Jalolov wobbled Mulowayi with yet another power left.

The end came in the eighth when Jalolov banged a short, crushing left on Mulowayi’s jaw. Mulowayi went down stiff on his back and Esteves never bothered to count, calling it over at 1:20.

“The (knockout punch) was a short uppercut, and during the fight, I landed a lot of liver shots, so he covered the body and I saw he was a little bit open inside, so I hit it twice and the second shot was flush,” Jalolov said. “That was it. I need to keep working, doing what I’m doing and I believe I have a bright future ahead.”

After Mulowayi regained his feet, Jalolov ran over, and in a very class move, put Mulowayi’s right arm over his shoulder and helped him back to his corner. 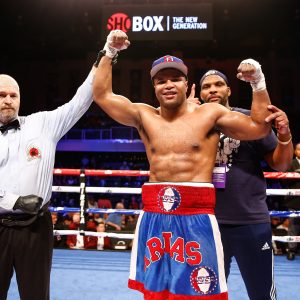 Smallish heavyweight George Arias (18-0, 7 KOs) made a nice statement in the co-feature with an eight-round split-decision victory over the previously unbeaten Alante Green (10-1-1, 7 KOs).

The 5-11 Arias took the fight on short notice. He had a come-forward hooking style facing his seventh unbeaten opponent. The 6-2 Green tried using his jab to keep Arias away, and early in, it worked.

At the outset, Arias had a great bounce to his step, and was clearly more athletic, but Green used his size and jab to keep Arias away in the first round.

By the middle of the fight, Arias began finding his distance and landing his left hook. It is not a devastating punch, but a respect-worthy punch. Green’s punch output began waning as the rounds went on. In the sixth, Arias burrowed in and landed another sweat-halo left hook. Green had lost the defensive zone his jab had established early in the fight.

They fought in a phone booth, with Arias landing chopping left hooks and right uppercuts.

After six, the sway of the fight was in Arias’ favor. Green appeared to be gassed.

Arias finished the seventh seemingly with the fight in hand. The course of the fight was fought exactly the way Arias needed it to go—in tight quarters, underneath Green.

Green tried to establish his distance in the eighth, but it didn’t work for very long. Arias tried to get inside, though this time, Green was able to keep the distance he needed to be effective. It just seemed to come too late.

Lightweight Chann Thonson (11-0, 8 KOs) received a nice career boost by stopping the formidable Tyler Tomlin (13-1, 9 KOs) at 1:01 in the fifth round of a scheduled eight-rounder.

“You have to expect every fighter and to face a fighter that is a brawler, you have to be careful,” Thonson said. “I hurt my leg a little bit two weeks ago so that was in the back of my mind. I knew if I stayed in the pocket with him that the shots I was going to give him would put him away.

“Surprisingly, he was a little tougher that I thought because when I hit him hard, he wasn’t taking a step back. So eventually I knew that would be his own demise and it was just a matter of time.” 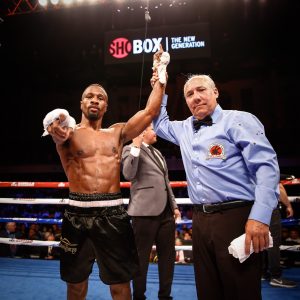 Thonson established control early. Tomlin got marked up on his left eye in the first round, due to a Thonson flush right. Tomlin took a terrible beating in the third. He wobbled back to his corner after being nailed by a left hook, then a right, and was later pounded by another left hook to close the round.

Thonson took it to Tomlin in the opening minute of the fourth, snapping his head back with right uppercuts and straight rights. Tomlin’s nose began bleeding from the onslaught, and referee Mark Nelson began taking a closer look at the exchanges.

“At the end of the fourth round he poked me in the eye, so I had to stay away and just make sure I could focus,” Thonson said. “But he never hurt me. I’m not sure what’s next but I’ll take it over with my promoter. I missed my sister’s wedding because of this so I’m going to have to make it up to her.”

Tomlin proved he could take a shot, but the punishment was increasing, despite Tomlin continuing to fight back. Finally, Nelson saw enough and wisely waved it over at 1:01 of the fifth.

“I feel fine, I feel like I was in the fight good, I just got caught with two overhand rights and I’m pretty sure one of them either broke or fractured my nose,” Tomlin said. “It was in the second or third round when I got caught. I felt and it threw off the game plan as far as what I was trying to do. I got a little more hesitant than I should have. I just can’t get hit by those overhand rights.

“Nothing against the refs but I feel like I could have finished the fight. I know they’re there for my safety. Part of my style is to take those shots and to keep moving forward.

“I never felt like I was out of the fight. It was still very competitive. The referee saw the cut and they felt it was in my best health and future going forward to stop it.”

On the undercard off TV, heavyweight southpaw Amron Sands (12-2, 9 KOs) won a unanimous eight-round decision over Joe Jones (13-5, 10 KOs). Light heavyweight southpaw Charles Foster (21-0, 11 KOs) stopped Bo Gibbs Jr. (23-3, 9 KOs) at 2:48 of the fourth round of a scheduled eight-rounder. Foster knocked Gibbs down in the first with a straight left.

U.S. Olympic welterweight bronze medalist Oshae Jones made her pro debut winning a six-round unanimous decision over tough Sonya Dreiling (4-3, 2 KOs). Jones, the southpaw from Toledo, Ohio, bloodied Dreiling’s nose in the second round and controlled much of the action. She showed good pace and skills, connecting on a variety of punches from different angles.

Welterweight Nicolas Tajada made a successful pro debut by stopping Mike Taylor (0-4) at 2:11 of the second round in scheduled four-rounder.