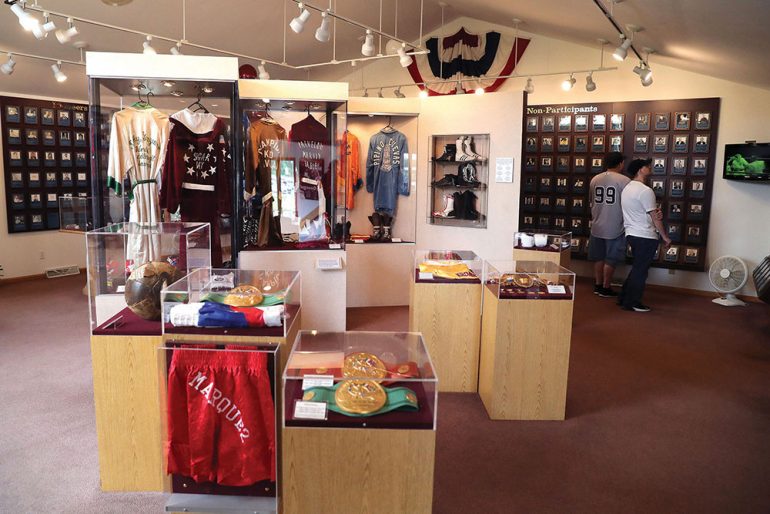 At 3pm today, Christy Martin and Regina Halmich were invited to ring the opening bell once each to signify that the International Boxing Hall of Fame Trilogy show was officially underway.

Three classes go in this year, as part of the first post-pandemic induction weekend, and the crowds flocked to Canastota for the opening day.

The Hawk, Julian Jackson, opened proceedings in a ringside lecture with James ‘Smitty’ Smith and then inductees and stars took to the stage for the grand opening.

Kathy Duva, James Toney, Antonio Tarver, Lou DiBella, Michael Spinks and Miguel Cotto were introduced and some of them took part in signings for fans. The early rain generally stayed away and the mood was buoyant and fans could finally congregate here for the first time in three years.

“Leon was always so special to the Hall of Fame,” said Brophy. “He will always be with us, he always had that great smile and he was so kind to everybody.”

There was also a mention of the recently passed wife of Canastota legend Carmen Basilio, whose widow Josie recently died aged 94.

Toney then took his turn to be interviewed by Smith, who asked his why he was known as an ‘old school fighter’.

“I fought the best fighters around, I didn’t duck nobody,” Toney said. He also paid homage to those he looked up, like Ray Robinson, Flash Elorde, Jersey Joe Walcott and Ezzard Charles and said he would like to have fought Nigel Benn, Chris Eubank, Joe Calzaghe and Mike Tyson.

Asked what would have happened had he fought Bernard Hopkins, who is also to be inducted this weekend, Toney snarled: “I would have fought him, I’ll still fight him.”

It was all good natured and you could sense the relief in Brophy’s voice when he proudly announced, “Welcome, everybody, to the trilogy weekend,” as boxing finally returned to Boxing’s Hometown.