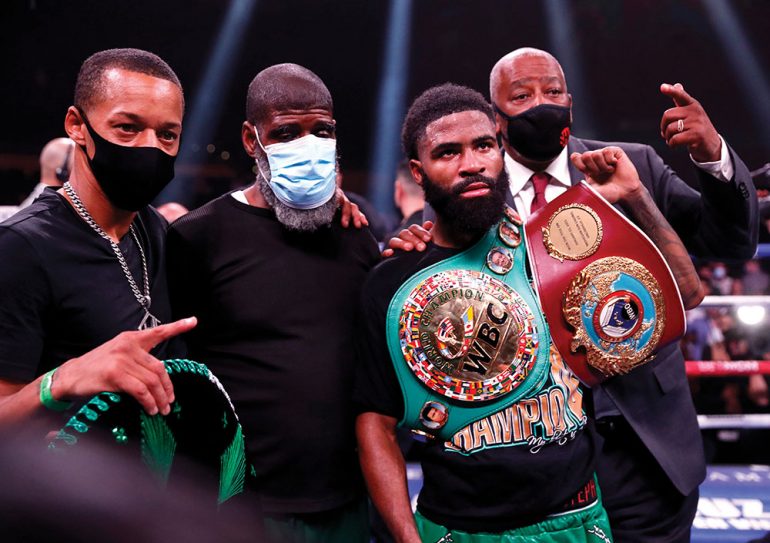 Fulton poses with members of his team after defeating Figueroa. (Photo by Steve Marcus/Getty Images)
09
Jun
by Joseph Santoliquito

It came down to something simple and basic: Listening. Wahid Rahim would give instructions to Stephen “Scooter” Fulton, The Ring’s No. 1 junior featherweight and WBO/WBC titlist, and sometimes those directions came with doubts and some contention.

Fulton (21-0, 8 knockouts) just came off the best victory of his career against former unified junior featherweight titlist Daniel Roman on Saturday, winning by shutout scores on two of the three scorecards.

The 27-year-old Fulton is on the verge of becoming a crossover boxing superstar. His personality and boxing acumen have brought him here. He is Philadelphia’s best lighter-weight fighter since Hall of Famer Jeff Chandler. But Fulton would not have arrived here without Rahim, a former junior lightweight who was 4-0.

Why has Fulton gotten exponentially better in his last three fights?

The two met for the first time sparring, when Fulton was 15 and Rahim was 29, nearing the end of his career. Rahim schooled the younger, less experienced fighter, though there was a fire about Fulton that appealed to Rahim. “Scooter” did not exactly accept the loss graciously.

“That told me he had the heart of a champion,” said Rahim, 41, who has been working fulltime as Fulton’s trainer since Fulton won the WBO title from Angelo Leo in January 2021. “That told me Scooter wanted to be better. He wanted to get better. He’s stubborn. I love that about him. Even though he understood the experience difference, he still wanted to be the top dog.

“He’s not even reached anywhere near his potential. He’s always known he’s good. Coming up, no one put any stock into me to help me grow. I saw the talent Scooter had and I committed myself to anything that needs to be done, I’m going to do for him. I love the kid.

“The biggest difference now with Scooter is that he listens. This is no knock to anyone, and it’s not meant that way. When Scooter was fighting for other people, Scooter was doing all the fighting himself. He was the one thinking and strategy and everything. He didn’t trust anyone. He taught himself.

The result was obvious.

In a great show of sportsmanship, Roman conceded, “There’s no excuse. I think this fight proves who the best 122-pound fighter in the division is. Fulton did that tonight. He proved it. I wish him the best and I hope he goes and achieves what I couldn’t achieve. Go become undisputed. Like I said, this fight proved who is the best in the division. Fulton was the better man tonight.

In the Roman fight, Fulton returned to his corner after the seventh round and asked Rahim what he needed to do.

As the accolades come at Fulton, they should also come to Rahim.

Fulton looked like a miniature Floyd Mayweather against Roman.

“That’s because Scooter listened, he made weight right, he ran when I asked him to run, and he stopped wearing that damned sauna suit he wore to lose weight against Figueroa,” Rahim said. “He didn’t argue with me. He didn’t fight with me. He did it. Everything I asked him to do, he did. He didn’t complain. He’s a world champion. That was always in him. I helped bring that out.

“What everyone saw Saturday night has always been there with Scooter.”

Rahim is a successful businessman in the Philadelphia area. Rahim and Fulton have a handshake agreement. It’s a trusting bond that is reminiscent of Cus D’Amato’s tie with Mike Tyson.

It’s a relationship that built organically.

“I did things on my own before Wahid, and once someone tells me something and I like it and it worked, it’s why I listened,” Fulton said. “I know what I can be. I’m already there. I don’t think I’ll be wearing a sauna suit like I did for the Figueroa fight. We were always hanging around and I know he loves me, and he’s someone I trust and I don’t trust anyone.

“Wahid is a lot better trainer than people know. Everyone else likes to take his credit. I think what makes it work between us is our chemistry, and that’s because I trust him. He’s around me and I trust him, why not invest in that person.”

On Saturday night, Devin Haney dominated George Kambosos for the undisputed world lightweight championship, but the best fighter in the world on Saturday night may have been Stephen “Scooter” Fulton.

“I’m getting older and the older you get, the more you realize there is nothing out there on the streets,” Fulton said. “I’m more focused right. When I’m focused like that, there is no one in the world that can beat me. It’s the perfect time.”

Fulton has the right people around him and he’s in the right place in time to make history at 122 pounds. He’s a lot more intelligent than people give him credit for. That comes with having Rahim in his corner. Fulton himself doesn’t realize how smart he is.

“I don’t, I’ll admit that,” Fulton said. “I have motivation on my side to keep going and not worry about anything else. I have more self-awareness that I had. I’m growing as a person in and out of the ring. I had to buy into what Wahid was telling me. I know I’m the one in charge. No one else makes those decisions but me. I’ve always been that way.”