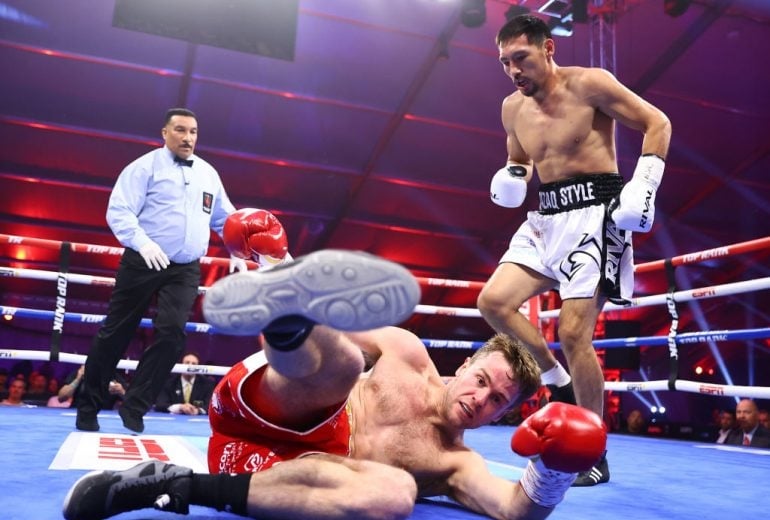 Unbeaten middleweight Janibek Alimkhanuly defeating Danny Dignum on May 21 didn’t come as a surprise – he was widely expected to win – it was the method of victory that was truly impressive.

Alimkhanuly, who is rated No. 5 by The Ring at 160 pounds, starched the British fighter in two brutal rounds, leaving us in awe and wanting more.

The 29-year-old Kazakh southpaw smelled blood from the beginning and wasn’t about to let his inferior opponent hang around.

“I already won before the start of the fight,” Alimkhanuly (12-0, 8 knockouts) told The Ring. “He had fear and excitement in his eyes. Eyes show your heart condition. If there is fear in your heart, you are nobody in the ring.

“I said it would be easy work and it was an easy fight for me. I proved to everyone that I am a tough and spectacular middleweight boxer. I think this will be Knockout of the Year.”

The win was greeted jubilantly in his homeland, but Alimkhanuly took it in his stride.

“In Kazakhstan, my every victory is a holiday – everyone congratulates [me],” he said. “I’m glad that I could give them joy.

“To be honest, I still don’t want to celebrate. I will celebrate when I knock out champions.”

Alimkhanuly isn’t content to just fight, he wants to test himself against the best around and is quick to call them out.

“I’m still hungry, I’m looking for champions,” he said. “I hope my next opponent will be a world champion or a famous boxer. I want to knock out all the boxing stars.

Alimkhanuly’s manager, Egis Klimas, knows that smoking out those big names is likely be a difficult proposition.

“It makes my job much harder but, at the same time, more enjoyable,” said Klimas, who lists unified heavyweight titleholder Oleksandr Usyk and former three-weight world champion Vasiliy Lomachenko among his clients. “I truly believe Janibek made a statement in the middleweight class and from now on his name will be recognized and respected.”

Klimas expects his client to be upgraded to full WBO titleholder in the not too distant future.

“Even though this bout was sanctioned as interim WBO, in our minds we knew Janibek was fighting for a world title,” he said. “The WBO championship committee made a ruling to champion Andrade and gave 30 days. We’re waiting for those days to expire to make our next steps.”