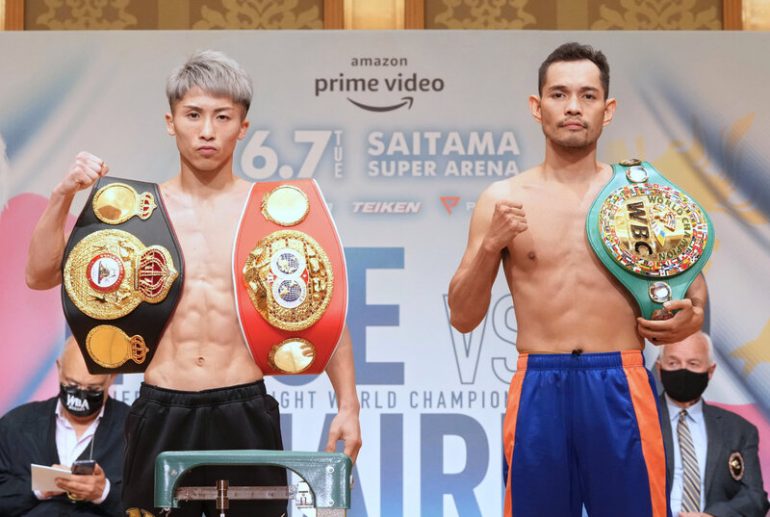 Ring, IBF, WBA and WBO bantamweight titleholder Naoya Inoue and WBC counterpart Nonito Donaire will meet in an eagerly anticipated rematch at the Super Arena in Saitama, Japan on Tuesday.

Inoue, 29, beat Donaire (UD 12) in an instant classic that was later named The Ring’s Fight of the Year for 2019. Since then, he’s marked time with three title defenses while waiting for his next big fight. “The Monster” is currently rated No. 3 on the mythical pound for pound list.

Donaire, who is rated No. 1 by The Ring, has bounced back impressively from the Inoue setback. The 39-year-old regained his old WBC belt by brutally stopping Nordine Oubaali (KO 4) and turned back Raymart Gaballo (KO 4) in his first title defense.

Can Inoue win in more definitive fashion this time? Can Donaire land with a decisive left-hook? Inoue hasn’t been pushed since the first fight. Will that be a factor? Donaire’s 40th birthday is only a few months away. Can he hold off father time once more? 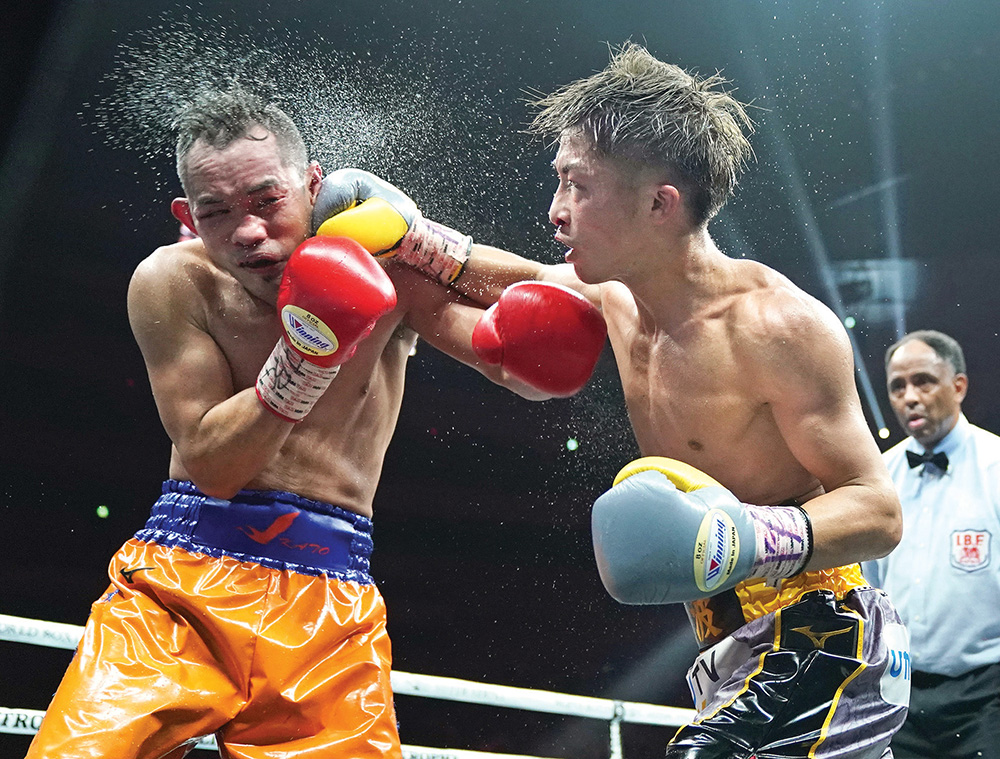 TOM GRAY: INOUE UD
“The first fight is the best I’ve ever watched live from ringside, which is far from what I’d expected going in. For me, Nonito’s decision to move back down to 118 pounds and his age were going to prove disastrous against the most destructive pound for pound entrant in the world. That prediction didn’t age well. Donaire turned in an incredible performance in defeat, shaking up “The Monster” and inflicting serious facial damage. He may have dropped a unanimous decision, but Nonito’s reputation as a modern-day great soared. He’s had two fights since, captured another world title and looked fantastic. I like Inoue by decision in the rematch, but if Donaire pulled it off, I wouldn’t be in the least bit surprised. My days of writing this guy off are over.”

ANSON WAINWRIGHT: INOUE UD
“I’m glad Inoue has the opportunity of a big fight after not being able to secure one since “The Drama in Saitama.” We also get to see what further miracles Donaire can conjure up. Donaire has breathed new life into his career since their first meeting, beating Nordine Oubaali and Reymart Gaballo. They’re solid wins but not Inoue-level. I feel prime for prime Donaire might just clip Inoue, but he turns 40 in a few months and as good as he has been, he’s no longer in his prime. That said, I think Inoue will box and pick his moments and slowly break Donaire down and maybe score a knockdown along the way to a wide unanimous decision without the drama of their first fight.”

LEE GROVES: INOUE KO 7
“A match between Inoue and Donaire in their primes would have been even more sensational than their first real-life meeting in November 2019, but the hard reality is that Donaire is pushing 40 and that the 29-year-old Inoue is still at his chronological peak, although he is nearing the end of it. “The Monster” has lived up to his nickname time and again because of his sharp all-around game, and that game will show Donaire that 39 is not the new 29. Always the consummate professional, Donaire will give himself his best chance by getting into excellent physical and mental condition and once the bell rings he will fight with honor, but Inoue is operating at an elite level that he won’t be able to handle. Inoue will take his time and give Donaire the proper respect given the facial damage he suffered in Fight One, but at the moment of his choosing he will shift into overdrive, drill holes through the Filipino’s defenses, and score a systematic yet sensational TKO victory that will further confirm his high-rating in-today’s pound-for-pound list.”

MARTY MULCAHEY: INOUE TKO
“I can wrap up my thoughts on the Naoya Inoue – Nonito Donaire rematch in one sentence. Donaire is three-years older, while Inoue is three-years closer to perfection. Their first fight was closer than I expected, and worthy of a rematch to be sure. Donaire was able to push Inoue like no other, but I see Inoue boxing smarter this time out (think Humberto Gonzalez V. Michael Carbajal II) and using superior speed to time Donaire into mistakes instead of trying to beat him to the punch like last time. This time Inoue will be able to work his in and out movement, without routinely getting tagged, and punish Donaire to the point of a late round stoppage.”

MICHAEL MONTERO: INOUE TKO
“The first time around, Donaire did everything he could do against Inoue, but it wasn’t quite enough. This time, I believe ‘The Monster’ will be an improved fighter, having learned some tough lessons during the 2019 Fight of the Year. I like Inoue by late stoppage in Saitama.”

NORM FRAUENHEIM: INOUE TKO 11
“Nonito Donaire’s resiliency over the last decade has been astonishing. Seemingly inexhaustible. He keeps coming back, first from a loss to Guillermo Rigondeaux, then Nicholas Walters, then Jessie Magdaleno, then Carl Frampton. Can he do it, do it all over again, this time from a decision loss to Naoya Inoue in the 2019 Fight of the Year? He was 36 then, just nine days from another birthday. Now, he’s 39, within six months of turning 40 against Inoue, 29 and in his prime. The years say it’s Inoue’s time now more than ever in a bout that figures to end late against Donaire, still game, yet without the energy to win another comeback. Inoue TKO 11.”

DIEGO MORILLA: INOUE UD
“I learned the hard way never to bet against a Filipino fighter. I predicted so many Manny Pacquiao defeats that never materialized that I shouldn’t even bother to count them. And I did predict a demolishing win by Inoue in the first fight against Donaire, which didn’t turn out to be accurate at all. But Inoue remains such a formidable fighter that it would take the very best Donaire to get even close to the kind of performance he put on the first time around. We may see more respect and caution by both fighters, but once the action heats up it will be all Inoue down the stretch.” 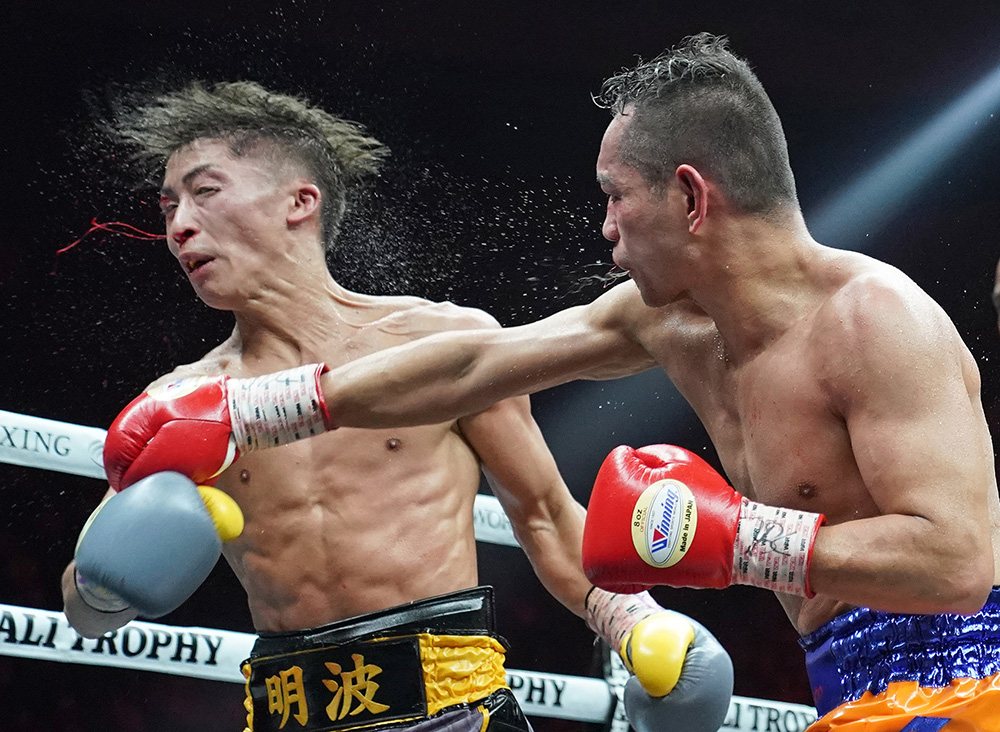 Those who thought that Nonito Donaire would be an easy night for Inoue were sorely mistaken. (Photo by Naoki Fukuda)

DUKE MCKENZIE (FORMER THREE-DIVISION TITLEHOLDER/TV ANALYST): INOUE TKO
“Inoue-Donaire 2 is still a good fight. Donaire’s recent form has been very good but ‘The Monster’ looks unbeatable at this point in time with no visible chinks in his armor. Inoue wins this once again, this time inside the distance. This should be over inside nine rounds.”

PAUL BUTLER (WBO BANTAMWEIGHT TITLEHOLDER): INOUE TKO
“I think it’s an amazing fight once again but with Inoue being a little more dominant this time around. Donaire still looks brilliant, even at his age, but I think the freshness of Inoue along with the speed and power may take Donaire out late on in the fight with bodyshots.”

JOLENE MIZZONE (MANAGER): INOUE TKO 10
“I think the first fight was a great fight, but I also think it took a lot from both guys. With Nonito being the older fighter, I am not sure if he will last the whole fight. Naoya Inoue TKO 10.”

ROBERT DIAZ (MATCHMAKER, GOLDEN BOY): INOUE TKO 9
“The first fight was very close and Donaire seems to get better with time. This will really show where Inoue is and if he can learn and improve. I believe he is and can. It’s a fun, exciting fight where Donaire will start strong but fade early from the power by Inoue. Inoue TKO 9.”

MARC RAMSAY (TRAINER): INOUE UD
“Inoue is undoubtedly one of the boxers that I like to see evolve the most, but in their last fight Donaire greatly surprised me. He seemed big and very strong physically and he posed several problems to Inoue in this fight. I see the same kind of very competitive fight but, in the end, Inoue should once again win by close decision.”

KATHY DUVA (PROMOTER, MAIN EVENTS): INOUE TKO 9
“The first fight between these two was incredible. Nonito Donaire continues to defy the odds at his age. He is already a first-ballot Hall of Famer. I am sure that both fighters will make adjustments coming into the rematch. But in the end, I believe that youth will prevail. Inoue is just hitting his prime and has shown no signs of slowing down. I think he gets the late stoppage in Round 9.”

ALEX STEEDMAN (COMMENTATOR): INOUE PTS
“This is such a hard call and an almost impossible sequel to the blockbuster first fight of 2019. With both fighters looking dynamite via knockout victories since then, surely, we can’t get more of the same? Certainly, Inoue has shown no psychological effects from the injury while Donaire continues to defy logic and time. Nonito will be looking to trap Inoue with big shots but I feel the monster has more scope to adapt if not improve. Inoue can press the action for a points win. Inoue by decision.”

STEVE FARHOOD (TV ANALYST): INOUE TKO 7
“It’s dangerous to ever count out Donaire, of course, but it’s also difficult to imagine that at his advanced age, he’ll repeat his incredible effort from the first fight. Inoue is a big enough puncher to stop Donaire. Inoue in seven.”

TONY TOLJ (MANAGER): INOUE UD
“Inoue-Donaire 2, is shaping up to be another classic. Inoue from Round 2 fought through a fractured eye socket, and Donaire can never be underestimated and is like a fine wine, just getting better with age. However, father time waits for no man and I believe Inoue, the ultimate student, will learn from the previous fight and will win and possibly stop Donaire. Inoue by unanimous decision.”

JASON MOLONEY (BANTAMWEIGHT CONTENDER): INOUE TKO 10
“I’m really looking forward to the Inoue vs. Donaire rematch and I hope it’s a cracking fight just like the first one was. I think Inoue will have learned a lot from that first fight and with the extra experience and also the improvements he has made over the past two-and-a-half years. I think he wins this rematch much more convincingly. I have enormous respect for Donaire, but at 39 years old, unfortunately I think there has to be a time/ fight when he starts to show his age. I think coming up against a prime Inoue with the extra experience and improvements he has made, this may be the fight we see it. I’m predicting an Inoue win, TKO 10.”

ERIC BOTTJER (MATCHMAKER): INOUE TKO 9
“I like Inoue to end Donaire’s wonderful career by knockout. Nonito has been an elite fighter for nearly two decades, a phenomenal length of time for a man his size. But Inoue, at age 29, is at his peak, and he’s perhaps the best 118-pounder who’s ever lived. I suspect he learned enough from Donaire during their first fight to capitalize on the aging Donaire’s missteps. Inoue in nine rounds.”

JOHN SCULLY (TRAINER): INOUE
“As much as I love Nonito, I can’t go against the savage, Inoue, at this point. I’m thinking a tough but emphatic unanimous decision for him.”