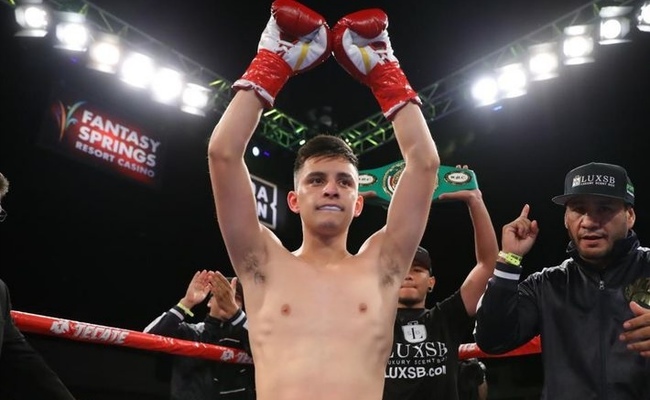 The 12-round bout will take place at Crypto.com Arena (formerly known as Staples Center) in Los Angeles, California. The fight will precede the main event bout between lightweight contenders Ryan Garcia and Javier Fortuna.

Sandoval (20-1, 15 knockouts), who resides in Rialto, California, stopped former title challenger Carlos Buitrago of Nicaragua in the seventh round of his most recent bout, on December 4. In his previous fight on June 25 of last year, Sandoval stopped Jay Harris in the eighth round of an IBF flyweight title elimination bout.

The 23-year-old has stopped his last seven opponents and has not lost since his fifth fight as a pro against Alonso Ceja in November 2016. Sandoval made his pro debut at the age of 17.

The 30-year-old Jimenez (11-0, 9 KOs), who resides in Catargo, Costa Rica, most recently fought on May 6, stopping journeyman Daniel Mendoza in the sixth round. The win over Mendoza took place over seven weeks after Jimenez knocked out Darwin Martinez in the fifth round.

The fight against Sandoval will be a major step up in opposition for Jimenez, although he has faced modest opposition thus far. Jimenez overcame a knockdown to defeat Jerson Ortiz by unanimous decision on February 18 of last year.

In a clash of unbeaten flyweights that took place on June 19 of last year, Jimenez knocked out Edwin Cano Hernandez of Mexico in the third round.

Jimenez will be making his United States debut after fighting all of his fights in Costa Rica and Panama.

No word yet if the Sandoval-Jimenez fight will stream live on the main portion of the Golden Boy Promotions card.