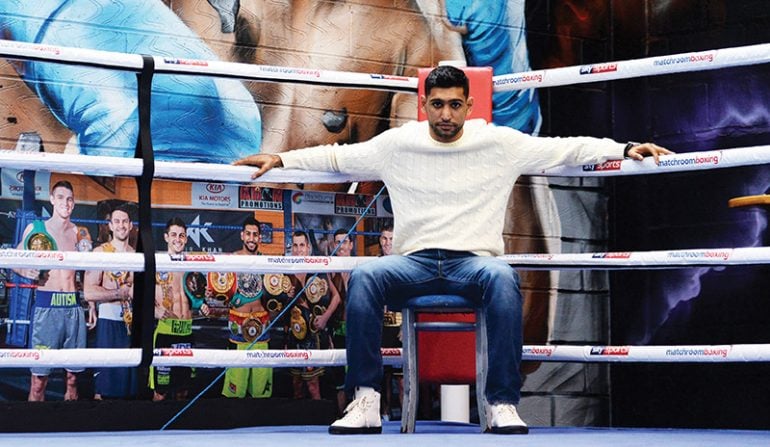 BOLTON, ENGLAND - SEPTEMBER 10: Amir Khan poses for a portrait during a media day at the Amir Khan Boxing Academy on September 10, 2018 in Bolton, England. (Photo by Nathan Stirk/Getty Images)
31
May
by Anson Wainwright

Amir Khan brought the curtain down on a highly-successful career when he retired from boxing after a 17-year professional career on May 13.

We first got to know Khan as a fresh faced 17-year-old, when he won silver at the Olympics. He turned professional and went on to become the unified junior welterweight champion. The popular British fighter regularly thrilled his legions of fans with exciting performances.

“I’m very happy and content with how my career went,” Khan exclusively told The Ring. “Going to the Olympics is an ambition I always had. I wanted to emulate people like Muhammad Ali, that I looked up to and follow in his footsteps. I always wanted to become a world champion; it was my dream from being a young boy.

“Looking back, I achieved a lot. One thing about me, I took the biggest fights. When you think how long I fought, who I fought, where I fought. A lot of people thought I was crazy taking the big fights, back-to-back as well. World champion after world champion. I fulfilled my dreams in boxing.”

The 35-year-old feels his proudest moment came as a teenager at the 2004 Athens Olympics.

However, while there were more highs than lows Khan admits he is most disappointed not being able to secure a fighter with either of the biggest names of his generation.

“I wanted to fight Floyd Mayweather Jr. and Manny Pacquiao,” he said. “They were the two biggest names in the sport. We got close to that but never did it.”

Khan had apparently won the right to face Mayweather back in 2014. However, when Khan announced the fight on his social media, Mayweather pulled the plug and instead met Marcos Maidana, who Amir had already defeated.

“That was so sad, it goes to show when you’re in control, you can do what,” he said ruefully. “He was like a little kid, sometimes you learn from people like him. He was at the pinnacle of the sport. I learned from that, to be a little more quiet, a little bit more professional. I was young, I got a little excited and posted it out and should not have. Maybe it was meant to go that way. Maybe Floyd never wanted to fight me and was looking for any excuse.”

Amir recently received an enquiry from a representative of Manny Pacquiao about the possibility of a fight.

“Pacquiao’s team were like, ‘Are you really retiring?’,” revealed Khan. “I’m like ‘Oh man.’ I’ve been waiting all my life for these guys and now I’m at the stage in my life I’ve done everything I wanted, the love has disappeared. What’s the point in me wasting my time now?”

That isn’t Khan’s only regret.

“I wanted to win The Ring Magazine belt but lost against [Danny] Garcia for that,” he admitted. “I did get messed about a lot, even when I wanted to fight a unification against Timothy Bradley, they never wanted to fight me. I was avoided a lot.”

For many years, Khan has carried a heavy pressure, he feels that has been lifted since officially announcing his retirement.

“If you think about it, I’ve had that pressure from day dot in my career,” he said. “It’s never been a time I didn’t have that pressure, no matter who I was fighting. The pressure was always there.

“Now I’m retired, you don’t understand, the weight has come off my shoulders, I can relax and be myself. Until I called it a day and said I’m officially retired I had that pressure.”

Khan, who is married and has three children, has a host of ventures inside and outside boxing he hopes to explore in the coming weeks, months and years.

“[I enjoy] doing television commentary,” said Khan, who retired with a record of (34-6, 21 knockouts). “I’d like to do a lot in America as well, similar to Lennox Lewis. I’ve done a couple of fights in America, in the U.K. it will be quite easy.

“I do a lot of charity work; I think my life now is charity work. Saving lives and helping people live a good life.

“I’d like to say a big thank you to the fans. Without them I don’t think I’d be here.”

Thanks for the memories, Amir, it was a fun ride.