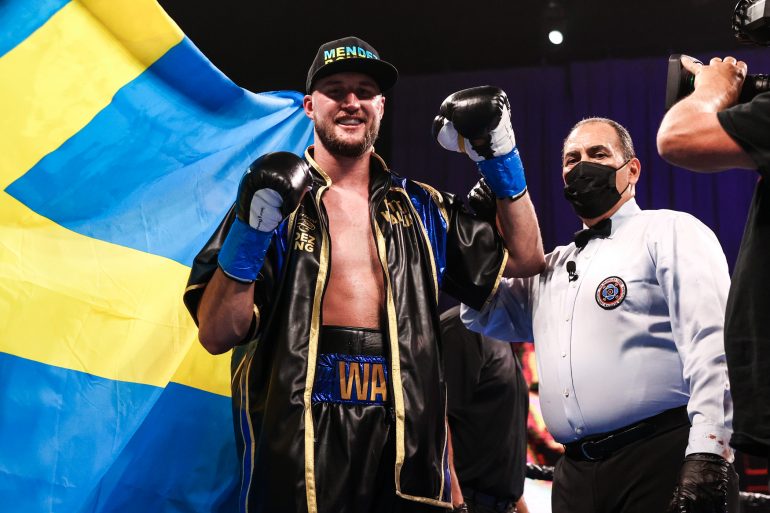 Photo by Amanda Westcott/ SHOWTIME
27
May
by Francisco Salazar

Heavyweight Otto Wallin defeated Rydell Booker by 10-round unanimous decision at the Lincoln Ballroom of the Ford Community and Performing Arts Center in Dearborn, Michigan, on Thursday.

Booker was game from the opening moments of the fight, but the taller and more polished Wallin swung momentum back his way and outboxed him. Wallin mixed his attack up well during the second half and Booker looked fatigued in the closing stages.

Wallin, who is originally from Sundsvall, Sweden and now resides in New York City, has won his last four bouts since losing by unanimous decision to Tyson Fury in September 2019.

Dmitriy Salita, who promotes Wallin, has high hopes for the 31-year-old southpaw and is willing to match him against the top fighters in the division.

“Otto Wallin showed that he is a world class professional in meticulously breaking down the very motivated and ready Rydell Booker,” Salita told The Ring early Friday morning. “If [Deontay] Wilder comes back in the near future, (I) would like for that fight to be for a meaningful WBC (ranking), depending on Tyson (Fury’s) decision (on whether to retire or not).”

In the co-feature, Shohjahon Ergashev, who is rated No. 7 by The Ring at 140 pounds, dropped Luis Alberto Veron twice en route to an eight-round unanimous decision victory.

The 29-year-old Veron, who had never been knocked out or knocked down in his career, was game and determined throughout. However, he was dropped twice – once by a straight left hand and once by a body shot – and had very little offensive success.

Veron also suffered a cut over his right eye in the seventh round, while Ergashev was deducted a point for pushing down on the back of his opponent’s head during that session.

Ergashev is confident he can defeat anyone at 140 pounds.

“Ergashev is in a league of his own,” said Salita. “He is getting better and better with (trainer) SugarHill (Steward) in his corner. (The) sky is the limit. He has incredible speed, power and heart. Leading up to the fight, he was battling a cold. I wanted to pull him out and reschedule his fight, but he would not have it. (He) went out there and put on a performance.”

Veron, who resides in Buenos Aires, Argentina, drops to 19-4-2 (9 KOs). He has now lost three of his last four bouts.