On This Day: Muhammad Ali knocks out Sonny Liston with ‘Phantom Punch’ 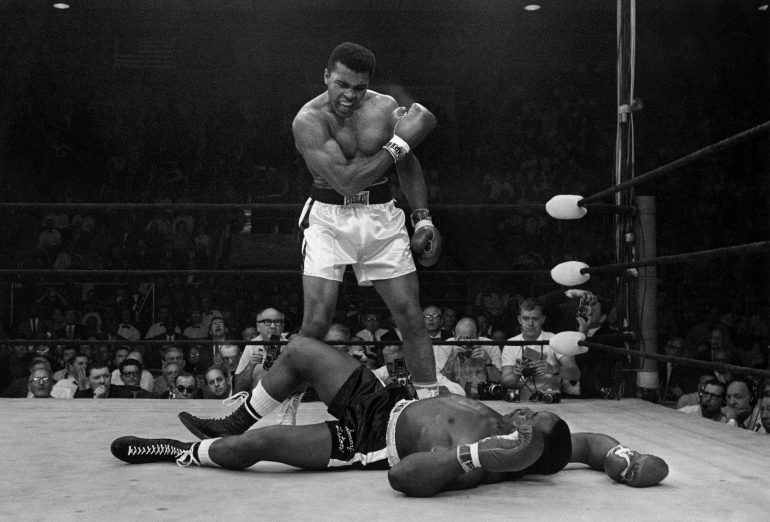 Ali's legacy endures to this day.
24
May
by Ryan Songalia

Muhammad Ali called it his “anchor punch,” a quick right hand that the young heavyweight champion claimed he had learned from his friend, actor Stepin Fetchit. To the rest of the world, it would be known as “The Phantom Punch.”

That shot, which Ali dropped Sonny Liston with on May 25, 1965, was far from a phantom. The right hand landed flush on the face of Liston, who, despite having lost to Ali in surprising fashion a year earlier, was still a favorite heading into their rematch. What people debate to this day is whether the punch had enough force to knock out a durable, yet aging former heavyweight champion.

As it was, Liston took the punch and fell flat on his back, then struggled to get up before falling back down. Ali stood over Liston and demanded that he get back up before running around the ring with his hands in the air. Liston rose up defenseless, but referee Jersey Joe Walcott stopped the fight on the advice of The Ring magazine founder Nat Fleischer, who told Walcott from his seat next to the timekeeper that the count had reached twelve.

Not even Ali seemed to know what happened.

“The punch that won the fight for me, I believe, was a left hook or a right cross. I really can’t think because it was moving too fast,” said Ali in the post-fight interview. He later regained his bravado to insist that it was all part of his plan.

“Didn’t I tell the world that I had a surprise? And that if I told you the surprise you would not come to the fight,” added Ali.

The rematch had originally been scheduled for November 16, 1964, but a hernia operation delayed the bout for six months. The fight was moved to a new venue and date, but the controversy was only beginning.

Moments after the fight ended in anticlimactic fashion, fans began shouting “Fix!” into the ring. Some had theorized that Liston, who had long-standing ties to organized crime, had thrown the fight. Another theory was that Liston had quit because he feared Ali’s connections to the Nation of Islam.

Still, others figured that Liston was simply a past-his-prime fighter who walked head on into a punch he didn’t see and came apart from a single shot.

The knockout, and his many years after atop the heavyweight picture, proved that Ali’s big upset the year before was no fluke. Ali would essentially clean out the division over the next few years, making eight successful defenses before being stripped of the championship for refusing induction in the U.S. Army during the Vietnam War. He would be champion again in 1974, knocking out Liston’s protege George Foreman in another big upset.

For Liston, the second straight loss to Ali would spell the end of his reign as a top heavyweight. He would run off a string of wins against overmatched opponents before a knockout loss to Leotis Martin in 1969 put the exclamation mark on his descent.

Fifty-seven years later, the debate about what happened in Lewiston continues to rage on.