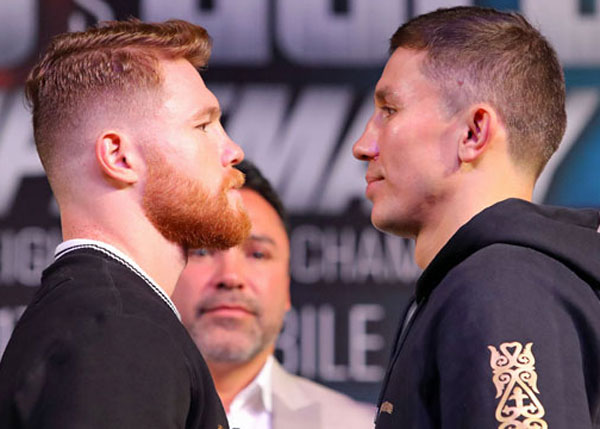 Canelo Alvarez is following through with the rubber match against Gennadiy Golovkin on Mexican Independence Day weekend.

Alvarez, the Ring Magazine super middleweight champion, confirmed he intends to face Golovkin, likely to take place on Saturday, September 17 at the T-Mobile Arena in Las Vegas, Nevada, and DAZN later issued a statement saying that the fight is signed for that date, although no venue has been announced yet.

“For sure, we are returning (to the ring) in September,” said Alvarez at Monday’s press conference to announce the inaugural “No Golf, No Life” amateur tournament at the Bosque Real Country Club near Mexico City. “In the next few days, we will announce the September fight. We already had the (Golovkin) fight under contract with Matchroom (Boxing) and DAZN. We have to continue what we started. These are the two important fights in boxing: the fight against Golovkin and the rematch against (WBA light heavyweight titleholder Dmitry) Bivol.

“Unfortunately, we lost (to Bivol), but that does not mean I’m not going to try again. What’s important is perseverance and I’m a persistent person and that’s what we’re going to do.”

Salvador Rodriguez of ESPN asked Alvarez the questions regarding his return to action and was the first to put the news out on social media.

“I feel very happy and proud to be able to give the best fights and this fight won’t be an exception,” said Canelo in a DAZN press release as the fight was officially announced, while Golovkin replied“I hope to see you on September 17.”. “The Canelo vs. GGG trilogy is the biggest fight in boxing and I am delighted to get this made for September 17,” said Matchroom promoter Eddie Hearn. “These are two men that bitterly dislike each other and want to end this incredible series with a blistering KO. I truly believe this will be the most thrilling fight between these two great champions and it will be fireworks from the first bell to the last man standing.”

Alvarez (57-2-2, 39 knockouts) lost to Bivol by unanimous decision on May 7, in a fight that also took place in Las Vegas. There was a rematch clause in the contract, and Alvarez had up to 30 days to decide whether he wanted to rematch Bivol or follow through with the third fight with Golovkin.

Both fights between Alvarez and Golovkin took place in Las Vegas, with their first fight in September 2017 resulting in the highly controversial split draw, a fight many observers thought Golovkin did more than enough to win. One year later, Alvarez would defeat Golovkin by majority decision in a close fight.

Golovkin (42-1-1, 37 KOs), who is originally from Kazakhstan and now resides in Los Angeles, has won his last four bouts since the loss to Alvarez. In his last bout on April 9, Golovkin stopped Ryoto Murata in the ninth round. Golovkin, the IBF middleweight titleholder, added Murata’s WBA world title belt with the win.

Aside from the Ring Magazine super middleweight championship, Alvarez will defend the undisputed world title belts against Golovkin.

A rematch against Bivol will likely take place next year on Cinco De Mayo weekend. In the meantime, Bivol could defend the WBA title against mandatory challenger Gilberto Ramirez. Golden Boy Promotions president Eric Gomez told The Ring before Ramirez’s knockout win over Germany’s Dominic Boesel on May 14 that they will follow through to have the WBA mandate Bivol defend the world title belt against Ramirez later this year.

Information provided by DAZN in a press release was added to update this article.