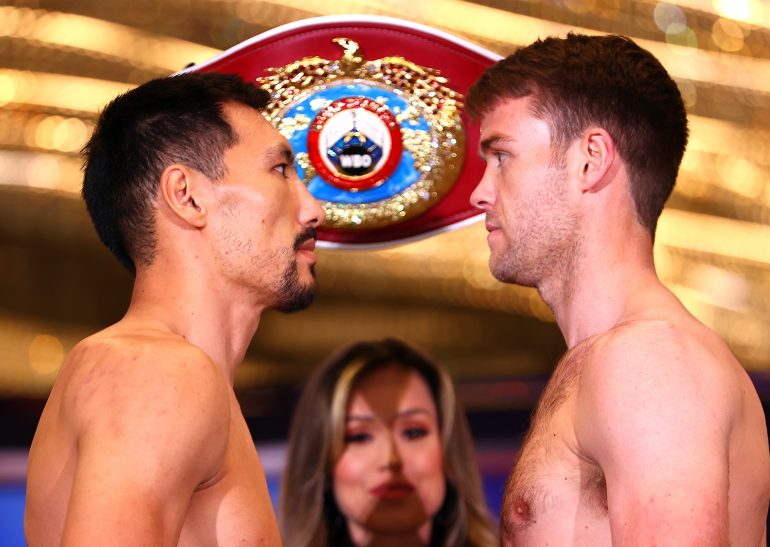 The few fans watching the ESPN+ stream or in person would witness him break down opposition, never getting the impression this strong fighter from Kazakhstan would become the legitimate contender he is today and could be on the brink of becoming the top fighter at 160 pounds.

And so Alimkhanuly has arrived, fighting in his first main event of a Top Rank card and for an interim world title belt.

The 29-year-old (11-0, 7 knockouts), who now resides in the Los Angeles area, is ranked No. 6 by The Ring. Alimkhanuly’s ascension to the upper echelon of the division has led to few willing to want to face him. The WBO mandated Demetrius Andrade to face Alimkhanuly, but Andrade earlier this year decided to move up to 168 pounds.

Alimkhanuly may feel disrespected or that he is avoided, but he is now focused on Dignum (14-0-1, 8 KOs), an unbeaten fighter from the United Kingdom. At least Dignum is willing to step in the ring and face Alimkhanuly.

“It’s boxing,” said Alimkhanuly at Thursday’s press conference. “Everything happens in boxing, as we all know. I am very happy that this young man took this fight. We’re going (to) deliver a very good fight for the audience.

“I respect (Dignum) very much for taking this fight. He is a good fighter. He has a good record. He is 14-0. He has a good amateur career. But when we step in the ring, all the respect is going to go away. It’s boxing.”

In a clash of unbeaten fighters in March 2020, Dignum dropped Alfredo Meli multiple times en route to a knockout win in the ninth round. Over 11 months later, Dignum fought to a split-decision draw against once-beaten Andrey Sirotkin.

In his last bout on February 11, the 30-year-old Dignum stopped Grant Dennis in the sixth round.

Alimkhanuly has studied Dignum on film and is confident he can expose weaknesses in Dignum’s game that could result in an impressive victory.

“I’ve been preparing for this fight for a very long time,” said Alimkhanuly, who is managed by Egis Klimas and trained by James ‘Buddy’ McGirt. “I’ve learned a lot about him. I’ve learned about all of the mistakes that he does in the ring. I’ve learned what his weaknesses are. I’m going to be playing with him, and I’m going to be showing my ‘Qazaq Style’ of fighting.” 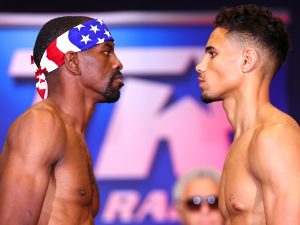 LAS VEGAS, NEVADA – MAY 20: Jamel Herring (L) and Jamaine Ortiz (R) face-off during the weigh in prior to their lightweight fight at Resorts World Las Vegas on May 20, 2022 in Las Vegas, Nevada. (Photo by Mikey Williams/Top Rank Inc via Getty Images)

Andrade has not yet vacated the WBO middleweight title. He moved up in weight to face Zach Parker, ironically this Saturday, but had to withdraw from the fight due to a shoulder injury he suffered about three weeks ago.

Alimkhanuly would be open to the opportunity to face Andrade or any of the other world titleholders at 160 pounds, including IBF and WBA titleholder Gennadiy Golovkin and WBC titleholder Jermall Charlo. In fact, per a mandate by the WBO, Andrade would need to face the winner of the Alimkhanuly-Dignum fight or be stripped of the title.

Alikhanuly is taking it all in stride.

“I think I’m one of the most avoided fighters. And I think in the future, many are going to continue to step aside. Many will not want to face me in the ring.”

In the co-feature, former WBO junior lightweight titleholder Jamel Herring (23-3, 11 KOs) will square off against unbeaten Jamaine Ortiz (15-0-1, 8 KOs) in a 10-round lightweight bout. Both fighters weighed in at 135 pounds.