The Neutral Corner: Episode 314 – Charlo Takes Undisputed in a Weekend of Upsets and Ring Returns 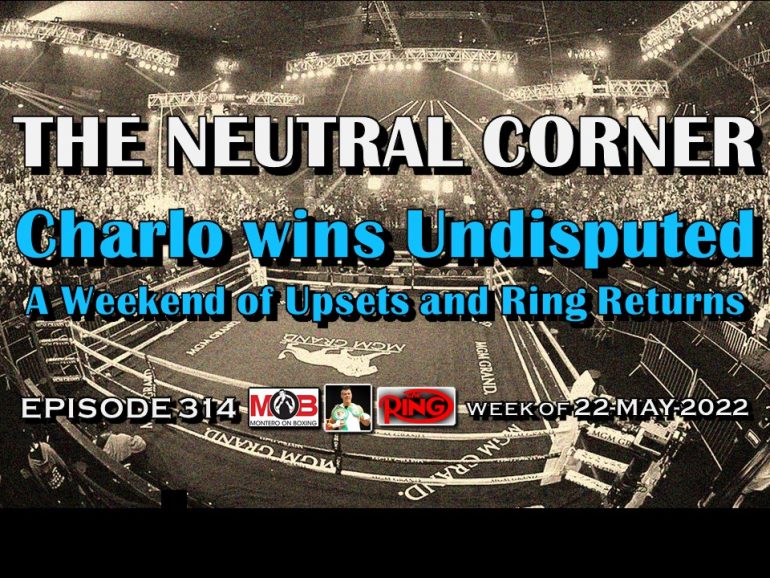 17
May
by Michael Montero

On episode 314 of The Neutral Corner boxing podcast, host Michael Montero gave a detailed breakdown of Jermell Charlo’s stoppage victory over Brian Castaño to claim the undisputed junior middleweight championship of the world. He also reviewed several upsets that happened over the weekend.

On Friday, May 13, battle-tested veteran Giovani De Carolis scored an upset TKO5 win over the previously undefeated Daniele Scardina in Milan, Italy. The super middleweight bout headlined a Matchroom Boxing card that was broadcast on DAZN.

There were three major cards in the Los Angeles area on Saturday night. In Ontario, Gilberto Ramirez stopped Dominic Boesel in the fourth round of a light heavyweight bout that topped off a Golden Boy card (also on DAZN). Lightweight prospect William Zepeda Segura remained undefeated with a UD10 win over rugged veteran Rene Alvarado in the co-feature.

In Inglewood, Sergey Kovalev won his cruiserweight debut via UD10 over Tervel Pulev, who suffered his first loss as a pro. Kubrat Pulev, Tervel’s brother, defeated Jerry Forrest by UD10 in the heavyweight co-main. Evan Holyfield, son of the great Evander Holyfield, suffered the first loss of his young pro career, a shocking KO2 defeat, on the undercard of the Triller/Fite TV show.

In Carson, California, Jermell Charlo and Brian Castaño fought their highly-anticipated rematch in a PBC on Showtime headliner. The first six rounds featured plenty of two-way action in what felt like an even bout, yet Charlo took over in the second half. He dropped Castaño twice in the tenth before securing the stoppage win, leaving the judges out of it. Philadelphia-bred Welterweight prospect Jaron “Boots” Ennis scored a KO2 win over Custio Clayton in the co-feature.

And earlier that day in France, heavyweight prospect Tony Yoka suffered his first pro loss, dropped a majority decision to Martin Bakole. It was a very one-sided fight, as the heavy-handed Bakole dropped Yoka twice. Although Bakole got the win, the official verdict was way too close. Judges Smail Alitouche, Bertrand Chagnoux and Ammar Sakraoui, all natives of France, turned in awful scorecards that did not reflect what had taken place in the ring, and should be suspended indefinitely.