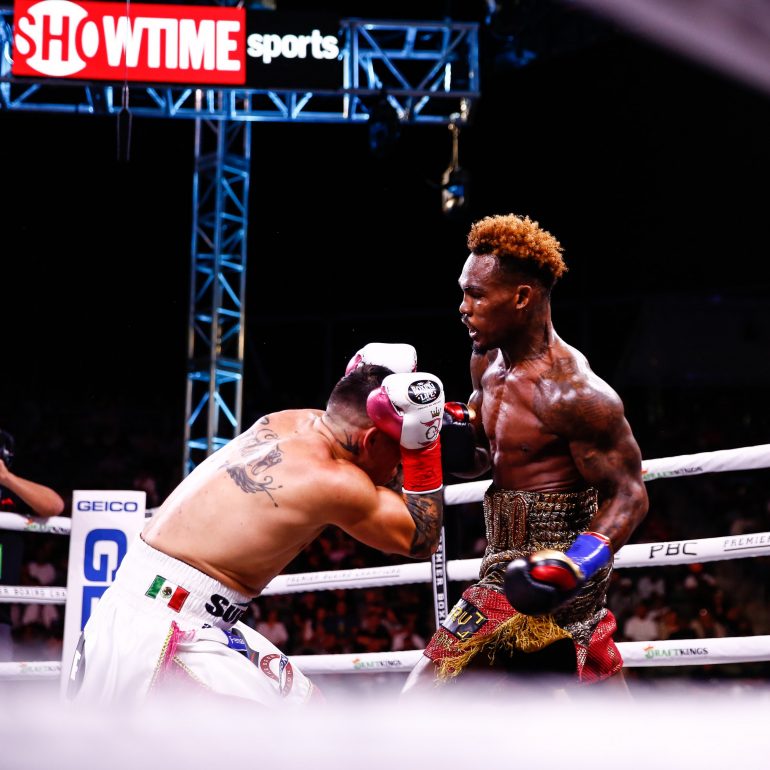 Jermell Charlo winds up with a big left uppercut during his rematch war with Brian Castano in Carson, Calif., on May 14. Photo by Stephanie Trapp / Showtime
14
May
by Doug Fischer

CARSON, California – There’s no need for a third Jermell Charlo-Brian Castano bout, but nobody would complain if they went at it again.

Charlo and Castano are built to go to war with each other. Pit a dynamic boxer-puncher like Charlo against a heavy handed pressure fighter like Castano – toss in two brick-like chins and aggressive attitudes – and you’re going to be treated to an entertaining showdown every time.

Charlo had been held to a rousing split-draw by the relentless Argentine last year, but he proved to be the better fighter by way of a 10th-round stoppage that ended thrilling rematch on Saturday at Dignity Health Sports Park in sensational fashion.

The back-and-forth battle lived up to the reputation of the intimate 8,000-seat outdoor venue, dubbed the “War Grounds” by hardcore fans and boxing media, and by winning it, Charlo, the defending Ring Magazine champ, unified the four major 154-pound titles to become the junior middleweight division’s undisputed king.

“This is legacy,” Charlo said during his post-fight interview on Showtime, which broadcast the rematch live in the U.S. “This was the fight of the year.”

Well, it was for the first six rounds. 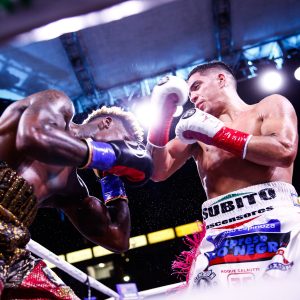 It didn’t take long for Charlo-Castano 2 to heat up. Photo by Stephanie Trapp / Shotime

Charlo started fast, sticking and moving with sharp form, spearing Castano with jabs and straight rights while keeping his back off the ropes. However, by the third round Castano’s steady pressure and sneaky lead rights began to force Charlo to the ropes and encourage more exchanges where both junior middleweights loaded up with their best punches – for Castano it was the right hand, for Charlo it was the hook. By the end of Round 4, they had the crowd of 7,406 on their feet. And the fans would remain standing – and cheering – throughout an epic Round 5, which featured the kind of power shots landed that would normally end a fight. Charlo and Castano took each others best shots and kept throwing in an electric Round of the Year candidate.

But after a strong Round 6, Castano lost some steam, slowed down and had trouble closing the distance on Charlo, who resumed his counter punch-on-the-fly game that worked so well in the opening rounds. Castano became more flat footed as his punch output dropped and Charlo took full advantage by timing well-placed jabs and power punches to the body and head.

A compact, perfectly delivered hook sapped Castano of all of his energy 2 minutes into the 10th and saw him sag to the canvas.

“I listened to my corner this time,” Charlo said. “I saw I was breaking him down, he was slowing down and I seen him crumble (when the hook landed). I knew it was over.”

Charlo stops Castano in RD 10 to become the first ever 154-lb undisputed champ in the 4-belt era. #CharloCastano2 pic.twitter.com/Fy81yrXTBp

Castano made it to his feet but was quickly backed to the ropes, where he caught another brutal hook before he was dropped again with a left to the body. Referee Jerry Cantu waved the contest off at 2:33 of the round.

“This is unbelievable,” Charlo said. “I gave it my all and that was the end result. 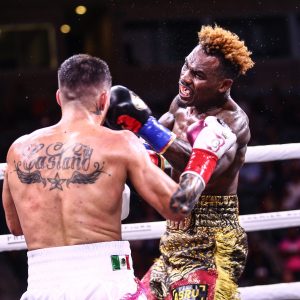 More action from Charlo-Castano 2. Would anybody complain if they did it a third time? Nah! Photo by Stephanie Trapp / Showtime

“I can consider this (fight) to be nerve-racking like my first fight, but I wanted to make sure this was my fight.

“The future is bright.”

Castano remains a top player at 154 pounds and is also must-see TV.

“Everything that was said outside of the ring was bull,” he said during his post-fight interview. “We were warriors here tonight.

“It was power back and forth, and then his (hook) ended it. That’s the difference between this fight and the last fight, he got me.”