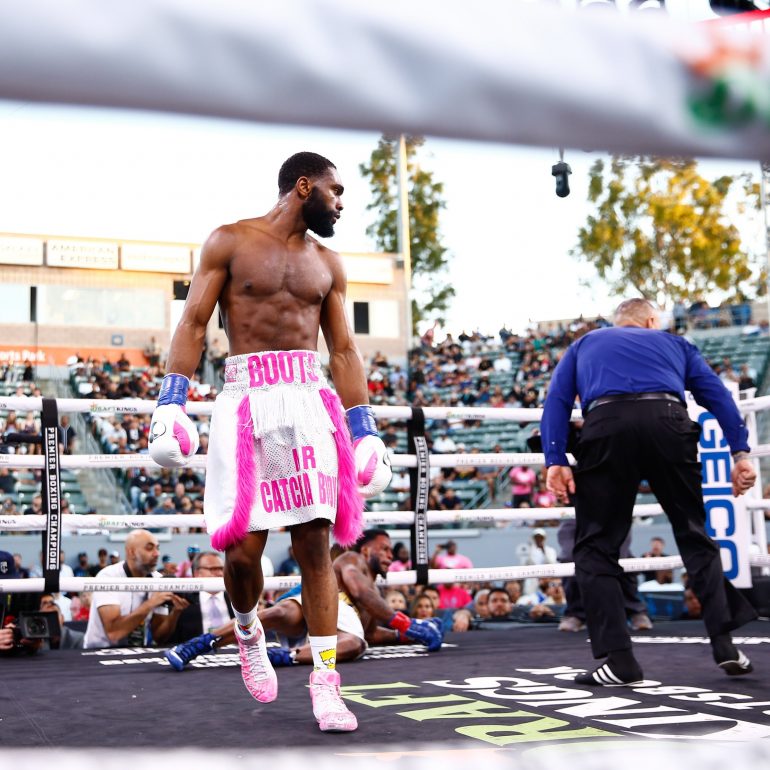 Jaron Ennis proved to be a class above Custio Clayton. Photo by Stephanie Trapp / Showtime
14
May
by Doug Fischer

CARSON, California – Errol Spence Jr. was known as The Truth as he battered welterweights on his way to unifying world titles and climbing pound-for-pound rankings. Spence, who was ringside to see his stablemate Jermell Charlo battle Brian Castano in a rematch for the undisputed 154-pound crown, might have to give that old ring moniker to Jaron Ennis, who made short work of previously unbeaten Custio Clayton on Saturday at the Dignity Health Sports Park.

Ennis (29-0, 27 KOs), The Ring’s No. 4-rated welterweight, has yet to face a top contender but he’s dominated his opposition in such a manner that hardcore fight fans already view the 24 year old as threat to Spence and Terence Crawford, pound-for-pound players and the world titleholders at 147 pounds.

One thing is for certain, fringe contenders like Clayton (19-1-1, 12 KOs) are no threat to Ennis, a well-schooled boxer-puncher from Philadelphia. Ennis outworked Clayton in the opening round of their Showtime-televised co-feature, taking the Canadian’s measure as he mixed straight lefts to the body with hard jabs. In the second round, the dynamic switch-hitter kept Clayton at the end of his jab until he saw an opening for a looping a right hand to the temple that instantly zapped the underdog’s legs.

Referee Ray Corona gave Clayton a slow mandatory 8 count as the groggy Canadian gradually made it to his unsteady feet but once the fighter stumbled into the ropes the fight was waved off at 2:49 of the round.

“We don’t get paid for overtime,” Ennis said during his post-fight interview for Showtime. “I’m just trying to perfect my craft, and get better and better each time.

“He had a high guard, so I tried to come around it with my right.”

And that was all she wrote for Clayton. Fans are ready to see Boots hunt bigger game. So is Ennis.

Ennis-Clayton was an IBF title elimination bout. Spence currently holds the IBF belt (as well as the WBC and WBC titles).