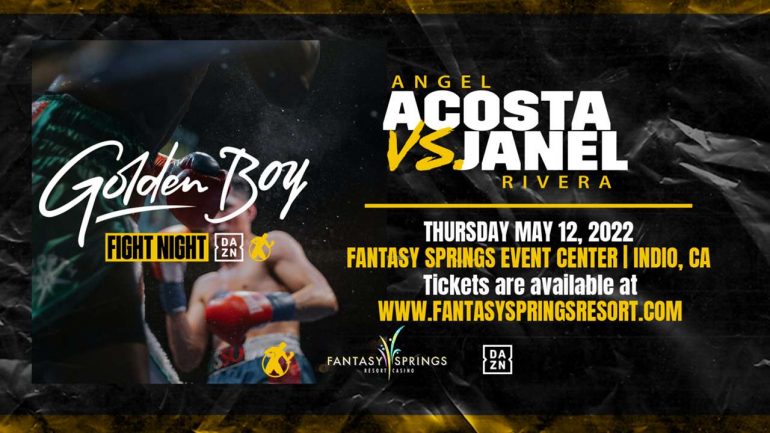 Angel Acosta vs. Janel Rivera
13
May
by Francisco Salazar

Acosta, who resides in San Juan, Puerto Rico, and now trains in Indio with Joel Diaz, improves to 23-3, 22 knockouts.

The bout against Rivera was meant as a stay-busy fight but Acosta was the aggressor from the start. After a clinch against the ropes, Acosta stepped back and connected a left hook to the head, staggering Rivera. Acosta followed Rivera into a corner where he connected a barrage of punches. Moments later, a right cross staggered Rivera again, prompting Acosta to land more at will, leading to referee Raul Caiz Jr. to stop the bout at 1:19.

The 31-year-old Acosta, who was also a WBO junior flyweight titleholder, is confident he can still win a world title at 112 pounds.

Morales, who was coming off a draw against Rudy Garcia in his most recent bout, on December 18, overcame a rough start early on as the southpaw Torres momentarily stunned him with a left hand in the second round. It was Morales the rest of the way as he effectively countered Torres with two and three-punch combinations to the head and body.

Midway through the fifth round, Morales scored a knockdown but it looked as though Torres tripped over Morales’ feet and lost his balance. Torres continued to be game but only landed one punch at a time and did not follow up when he had the opportunity to do so.

An accidental clash of heads early in the ninth round opened a cut over Morales’ right eye but did not appear to affect him. Morales sealed the victory by dropping Torres with a barrage of punches in the 10th round.

Torres, who resides in Sacramento, California, drops to 11-5-3, 4 KOs and has lost his last four bouts.

In the opening bout of the Golden Boy card, junior middleweight Eric Tudor defeated Donte Stubbs (6-5, 2 KOs), of nearby Riverside, by unanimous decision. All three judges scored the bout 60-54 in favor of Tudor, who improves to 4-0, 3 KOs.