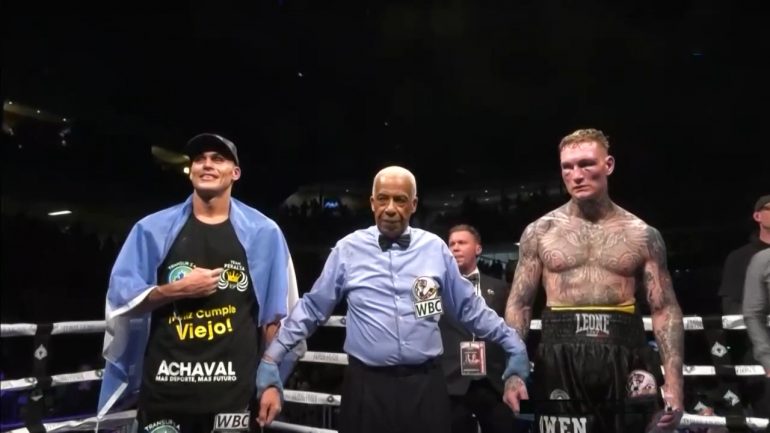 It had all the marks of a blatant robbery: an inexplicable delay in the delivery of the scorecards, a loud disapproval of the audience after they were read, and the “winner” of the fight raising his foe’s hand in signaling that the wrong guy had been awarded the victory.

The WBC has already ordered a series of measures to make sure that the cruiserweight bout between two-time Olympian Yamil Peralta and Canadian knockout artist Ryan Rozicki gets the proper treatment after seeing Peralta being declared the loser in a fight that he dominated from beginning to end.

But that hardly serves as consolation to the fighter himself.

“The truth is that we worked hard to get the win, but everything happens for a reason,” said Peralta, in a phone interview. “If this time it didn’t happen, then we will continue training hard to get another opportunity. I am aiming for a rematch. I would love to fight him again. If not, well, I’ll face anyone else. I will be as strong as I can be waiting for the next fight.”

The fight took place at the Centre 200 in Sydney, Nova Scotia, Canada on Saturday, and went largely under the radar since it happened at almost the same time in which Saul “Canelo” Alvarez was having a really bad night against Dmitry Bivol elsewhere in the television dial.

In the fight, Peralta (now 13-1, 6 knockouts) was clearly on his way to a decisive win against Rozicki (15-1, 14 KOs) until local referee Hubert Earle deducted a point from Peralta for holding (with no previous warning, while it was Rozicki the one doing the holding) in an ominous sign of things to come. After the bout ended, it took the all-Nova Scotia group of ringside officials a considerable time to finish the tabulation, which ended up in a split decision win for Rozicki with scores of 97-93 and 95-94 in his favor. One judge had it 95-94 for Peralta.

Since the fight had a WBC regional title not recognized by The Ring at stake, the Mexico City-based sanctioning body was on the receiving end of the ensuing complaint by Peralta’s camp, and they responded swiftly by ordering a rematch using “neutral officials,” as they said in a press release.

They also indicated that “Rozicki will not be recognized as WBC international champion and the WBC has a task force arranged to determine what exactly happened.”

The press release goes on to say that “the WBC appointed a panel of officials to review the fight and it unanimously determined that Peralta should have been awarded the victory. The WBC has also taken into consideration the strong objection which we had all along with regard to the appointment of the ring officials from the local boxing authority, as they selected all four local officials.” The bout was supervised by Italy’s Mauro Betti.

After receiving no objections from Three Lions Promotions’ president Daniel Otter, the WBC proceeded to declare the title (International Cruiserweight championship) to remain vacant, while also disregarding the result of the fight in the elaboration of their May rankings.

Peralta feels that the entire situation will only make his long wait for a title shot only more worthwhile.

“Honestly, I am getting ready to become a world champion. I am on that road. Whatever my promoters think we should do, that’s what will happen. We are ready for anyone. Little by little, things will fall into place.”

Rozicki’s only defeat came at the hands of Colombia’s Oscar Rivas, in a WBC bridgerweight title (not recognized by The Ring) bout that took place on October 22, 2021.