Delfine Persoon takes on Elhem Mekhaled in Dubai on May 14 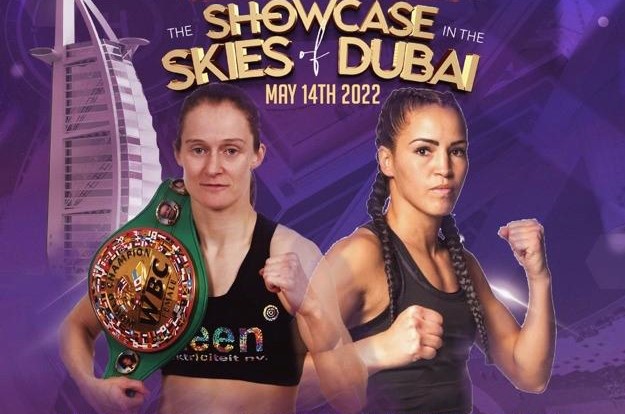 A women’s 10-round junior lightweight bout has been added to the inaugural edition of “The Global Titans Fight Series,” headlined by the ring return of Floyd “Money” Mayweather facing “Dangerous” Don Moore on Saturday, May 14, as former unified champion Delfine Persoon of Belgium will take on France’s undefeated Elhem “The Diamond” Mekhaled.

Perhaps best known for her two-fight series against top pound-for-pound fighter Katie Taylor, Persoon, of Roeselare, West-Vlaanderen, Belgium, held the WBC lightweight belt for five years and made nine successful defenses before losing a controversial decision to Taylor for the undisputed lightweight championship at Madison Square Garden in 2019. The rematch with Taylor was held in 2020 and Persoon again lost a razor-thin decision.

Persoon, rated No. 6 at pound-for-pound, No. 1 at junior lightweight and No. 2 at lightweight by The Ring, works as a railway policewoman in her homeland, and started professional boxing in 2009 after competing in judo. Persoon held the IBF lightweight title in 2012.

“It’s great to be back in the ring and I’m very excited to compete on an undercard for Floyd Mayweather,” said Persoon. “My opponent has a good record and I respect her taking this challenge, but I’m going to show her I’m at a different level. Just like I did against Katie Taylor, I’m going to bring the action from start to finish and do everything I can to have my hand raised.”

The undefeated Mekhaled hails from Vaulx-en-Velin, Auvergne-Rhône-Alpes, France. In her five-year career, she has held the French and European Championships.

The fight against Persoon will be Mekhaled’s second outside her native France. The 31-year-old was last seen scoring a first-round knockout over Bosnia And Herzegovina’s Pasa Malagic to successfully defend her EBU (European) belt in September 2021.

“I’m on the path to a world title and this victory is going to catapult me toward my goal,” said Mekhaled. “It’s an honor to be fighting on a big card like this with Floyd Mayweather, and I’m planning to show everyone watching that I’m ready to become world champion.”

A press release by Mayweather Promotions was used in this article.