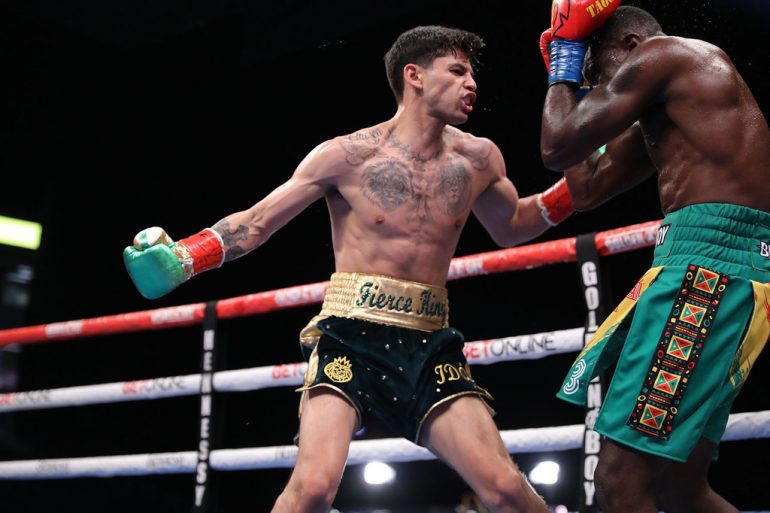 Photo courtesy of Golden Boy Promotions
11
May
by Francisco Salazar

Representatives for both fighters have 30 days to negotiate a deal before a June 14 purse bid.

A deal between Garcia and Cruz, ranked No. 5 and 6, respectively, by The Ring at 135 pounds, might be difficult to make due to promotional and network deals. Garcia is promoted by Golden Boy Promotions, which streams its fights on DAZN, and Cruz is represented by manager Sean Gibbons and fights under the Premier Boxing Champions (PBC) banner. Fights that take place on PBC cards air live on Showtime.

Garcia (22-0, 18 knockouts), who is originally from Victorville, California and now trains in San Diego, is currently ranked No. 2 by the WBC, behind mandatory challenger Vasiliy Lomachenko. Cruz is ranked No. 4 by the sanctioning body based in Mexico City.

The winner of the fight between Garcia and Cruz would become the mandatory challenger to face WBC titleholder Devin Haney, who will face Ring Magazine champion George Kambosos on June 5 (June 4 in the United States) in Melbourne, Australia. Lomachenko is not available to fight at the moment as he returned to his native Ukraine to fight against the invasion from Russia.

In his last bout on April 9 in San Antonio, Garcia dropped once-beaten contender Emmanuel Tagoe of Ghana en route to a one-sided decision victory. Garcia was ecstatic about the possibility of his next fight against Cruz.

“I’m so excited!!! This fight just got ordered by the WBC sooo little chance this man escapes from his fate when he entered the ring with me,” stated Garcia to his nearly 91,000 followers on Twitter and several million on Instagram. “… let(‘s) go, pit bull roof roof time to make this happen don’t do anything weird let’s give the fans what they want!!!!!”

A fight between Garcia and Cruz was eyed for the same April 9 card, but promotional and network issues reportedly got in the way.

Cruz (23-2-1, 16 KOs), who resides in Mexico City, dropped Yuriorkis Gamboa three times en route to a knockout win in the fifth round. In his previous fight on December 5, Cruz went all out against unbeaten and hard-hitting Gervonta Davis before losing a close unanimous decision.

The 23-year-old appeared on a handful of ShoBox telecasts.

Sulaiman also announced three more world title elimination bouts. The following bouts also need to be negotiated and agreed to unless any or all fights go to purse bid:

– A world junior lightweight clash between O’Shaquie Foster (19-2, 11 KOs) of Houston and Mexico’s Eduardo Ramirez (26-2-3, 12 KOs). The winner of the fight would become the mandatory challenger to newly-crowned WBC titleholder Shakur Stevenson.