Sergey Kovalev looking to reign and retire as a cruiserweight champion 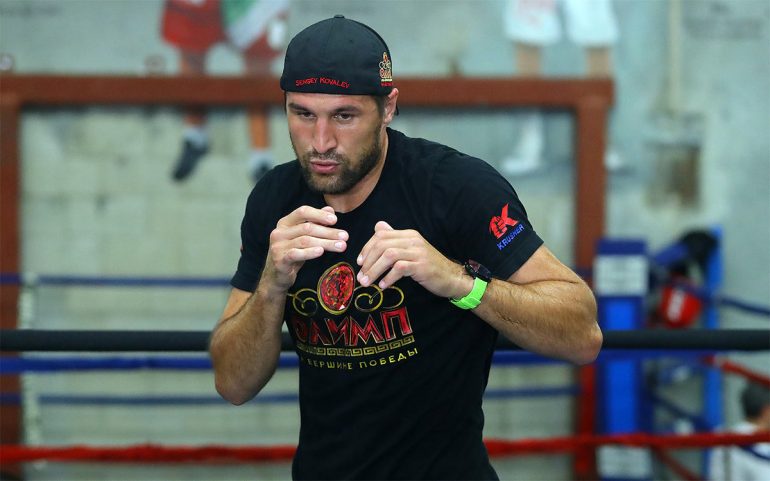 Kovalev, who held five world titles at 175-pounds over a six-year period from 2013-2019, is pleased to be returning to boxing after a lengthy spell of inactivity.

“It’s a very exciting moment for me because it’s two-and-half years since I fought,” Kovalev (34-4-1, 29 knockouts) told The Ring. “I stayed in shape but didn’t spar. Everything is going like it should be. I’m excited to be back in the ring.”

The 39-year-old power-punching Russian acknowledges this fight is important for his immediate future in boxing.

“This fight will show me if I can go to the world title or not,” said Kovalev, who will enter the fight at around 185-187-pounds, though the contest is made at 198-pounds and has a second day weight limit of 210-pounds. “It’s a nervous moment for myself.”

The last time we saw Kovalev in action, he ran pound-for-pound superstar Canelo Alvarez close before succumbing in the 11th round.

“Canelo is a great fighter, he’s doing his legacy in his boxing career, he’s very smart and I wish him good luck,” Kovalev said before explaining his lack of energy late in the fight.

“I hit a lot of limits for this fight. My last fight [with Anthony Yarde] was August 24. I stayed with my family in my hometown for five days and went back to USA for training camp.

“I required a couple of weeks rest but they didn’t give time. If I had three-four weeks rest and had eight-week training camp, the fight would be different.”

His longtime promoter, Kathy Duva, of Main Events, feels her prized fighter is ready to resume his career.

“There is no doubt that Sergey needed to take a rest after the madness that was 2019 for him,” said Duva. “He won back his world title from Eleider Alvarez, took on an incredibly game Anthony Yarde in his hometown and then stepped into a mega fight with Canelo Alvarez – all in the space of nine months. Of course, with the pandemic, the rest turned out to be a lot longer than I would have liked.”

According to Kovalev, who has trained for eight weeks with Buddy McGirt in Los Angeles, the move up in weight is long overdue.

“I am sparring bigger guys and it’s something different,” said the 2014 Ring Magazine Fighter of the Year. “They punch harder but are slower. The last few years when I fought at light heavyweight, I was 200-pounds [coming into camp]. Which was difficult to make weight at 175-pounds. It was time to move up divisions.”

Duva concurs with her fighter and believes the Canelo bout showed the need to step up to cruiserweight.

“I believe that the need to keep his weight artificially low in order to make the 175-pound limit for the better part of an entire year took a toll on Sergey, who had been fighting at 175 since he was an amateur,” said the promoter. “During the preparation for the Canelo fight, which took place just 10 weeks after Yarde, Sergey was losing muscle to make weight. I believe this had a lot to do with him becoming so fatigued towards the end of the fight. Remember, the fight was still in reach for Sergey on the cards—one of them had it even—going into the 11th round. He simply had nothing left. It was clearly time for him to move up to cruiserweight.

“I hadn’t seen Sergey in over two years when we gathered for the press conference announcing his fight with Tervel Pulev a few weeks ago. I was struck by how much better he looks at 200 pounds. He carries the extra weight quite comfortably.

“Punchers like Sergey often give up an advantage when moving up in class—even when the difference is only a few pounds. And Sergey is moving up 25 pounds. But his secret weapon has always been that he is a beautiful boxer. Just ask Bernard Hopkins. And Sergey has always trained with cruiserweights because, as a rule, smaller guys could not take his punches for more than a few days in the gym. Also, I think he will be faster than his cruiserweight opponents. Word in training camp is that Sergey very happy that he doesn’t have to kill himself to make weight. So, I think he can handle the step up.”

Duva says Kovalev has always been driven by goals and expects that to continue.

“First, he wanted to win a world title,” she said. “Then he wanted to unify. As soon as he accomplished all of that, he asked me to get him fights with opponents who would launch him onto the pay-per-view platform.

“Now he wants to retire as the cruiserweight champion. Sergey’s first bout with a cruiserweight on May 14th is the first step on his way to that goal. I know him pretty well after working together for 10-years. And he has given me no reason to doubt that he will reach this latest goal, just like all the others.”

Kovalev is very much on board with those plans.

“I will win another title in the cruiserweight division and after this I will say, ‘arrivederci’,” he said. “Time will show, any possible title fight. I’ve never been WBC champion, that would be great.”

Pulev, who is the younger brother of two-time heavyweight title challenger Kubrat, won bronze at the 2012 London Olympics before turning professional in 2016. The 39-year-old hasn’t really made his mark as a pro, despite winning all 16 fights, he has not been able to lure a big name into a fight until now. This fight is as much his proving ground as Kovalev’s.

Kovalev-Pulev plus full supporting undercard will be broadcast on Triller and Fite.tv.