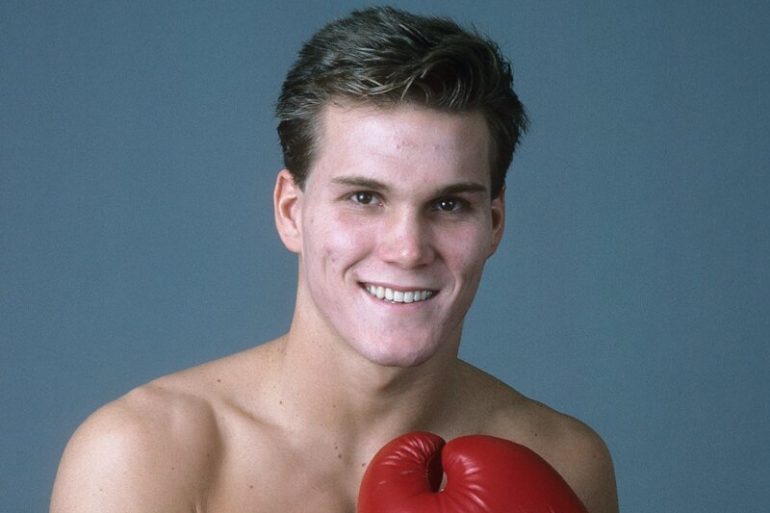 Van Horn was born in Cincinnati, Ohio on September 7, 1968. However, much of his formative years were spent moving around America.

“I was living in Florida when I was in third or fourth grade,” Van Horn told The Ring. “Then I went to Louisiana, my dad was moving around and he got a place in Louisiana and had us come up there. The boxing started when I got to Louisiana.”

His father, G.L. Van Horn, was a successful entrepreneur who provided for his family though not without a few scraps along the way.

“Anything I wanted I got when I was a kid,” he said. “[My father] was in prison in San Quentin for a couple of years. He was just hustling all the time, he got a couple of felonies. I think it was that three strikes-law.”

When the patriarch of the family was released, he set about his next project: his son’s burgeoning boxing career. When word got out about Van Horn’s boxing ability, he was invited to move to Lexington, Kentucky to start a boxing program.

“My dad always put me in with anyone who would box,” he recalled. “One guy had 48 fights and I had three fights. [I] got beat five times by one guy. The last time I fought him, I beat him.”

The highlights of his amateur career came when he won the New Mexico PAL and Louisiana Golden Gloves as a junior. He finished his time in the unpaid ranks with a purported record of 45-9.

“My dad thought I could beat anybody around my weight,” he said. “I guess I was a lot better than I thought I was.”

Van Horn combined boxing with studying at the University of Kentucky, thus earning the nickname “Schoolboy. After running his record to 39-0 (25 knockouts), he was matched with newly minted IBF junior middleweight titlist Robert Hines in Atlantic City, New Jersey in February 1989.

“I was 20 years old, I pulled out of college for one semester and was training all the time,” said Van Horn, who was a 2-1 underdog. “He was hard to hit so I just went in there and start slugging. He was pretty slick; I knew I’d have to go after him. He was really tough.

“I didn’t know I was winning the fight; I had no idea. I was just fighting as hard as I could. Right after the fight they’re announcing the scorecards, you see how high I jumped up when they said I won [a 12-round unanimous decision]. I became world champion when I was a sophomore in college. That was a really good day for me.

“After I won the fight, I just rested, I knew I was going to be really busy defending my title.”

However, his time as champion lasted just five months when he surprisingly dropped the title to wily Italian Gianfranco Rosi in Atlantic City in July 1989.

“In the first round, he hit me with a right hand that I didn’t see coming and I went down,” said Van Horn, who lost a wide 12-round unanimous decision. “I got up and kept fighting. I was completely out of it. I don’t remember anything else the rest of the fight.

“After the fight, I was so mad at myself. I had seen him boxing other people and I thought, ‘I’m gonna kill the guy.’ And that wasn’t the case. I was supposed to beat him and then my next fight they were talking about fighting Nigel Benn and that would have been a real big money fight.” 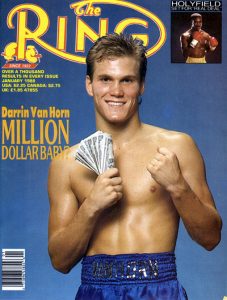 With his plans for a big fight now in tatters, the American was forced to get back in line. He won five fights, all the while yearning a rematch with Rosi. His opportunity came a year later but this time he had to travel to Italy.

“It was the same thing,” said Van Horn, who was clearly at a loss to explain how he was beaten by Rosi. “He was an awkward fighter and it’s hard to know what he’s doing; he jumps around and what he does he does good and hits you from different angles. I had a lot of energy left at the end of the fight.”

“My promoter was Cedric Kushner and my dad said we’re going to fight Lindell Holmes at ’68,” he explained. “I said, ‘OK.’ I didn’t have anything to do with the making of any of the fights I had. My dad said, ‘Your stock went way down when you got beat by Rosi again at 154 pounds, so we’re going to have to move up to a bigger weight class to get some publicity.”

Kushner organized a fight with IBF titlist Holmes in Italy in May 1991.

“The scorecards were real close,” he said. “I boxed Lindell Holmes the entire fight, I didn’t slug with him because he was a big guy. I got him with a body shot in the 11th round. If I hadn’t of hit him with the body shot, I think he would have ended up winning.”

“I don’t know what the hell made them think go right up to fight Barkley – he was just too big for me,” admitted Van Horn, who was dropped three times and stopped in the second round.

“I was going to box Iran Barkley but I got in there and I said, ‘I’m going to start slugging.’ I knew he had a big left hook; I didn’t think a whole lot about the right hand. I get so mad thinking about it.

In May 1992, Van Horn graduated from the University of Kentucky with a bachelor’s degree in broadcast journalism.

He fought on and won six fights and was tabbed to fight IBF titleholder James Toney in October 93 and WBC titlist Nigel Benn in September 94. However, for a myriad of reasons they never came to pass. Van Horn (54-3, 30 knockouts) fought for the final time aged 25.

“I had been fighting since I was 12, I did it full time every day, that’s all I did,” he said. “I got to the point where I was fortunate to be a two-time world champion. After I fought those [comeback] guys, I thought, ‘Where am I going from here? I’m not a super middleweight. I had college, I needed to finish up. I kind of got bored with it. My whole life was consumed by boxing.”

Van Horn, now 53, is divorced, has four children and lives in Lexington, Kentucky. He made good money from his boxing exploits and is able to live off that.

John Munduga: He had a really stiff jab, when we started fighting, I couldn’t get in on him because he had that long jab. I said, ‘I’ve got to do something else because I can’t let him keep hitting me with this jab.’ I threw everything at him and said, ‘Let’s get it on.’ I started banging on him and knocked him out in the seventh round.

Robert Hines: He was hard to hit so I just went in there and started slugging. He was pretty slick; I knew I’d have to go after him.

Elio Diaz: He had a quick jab and his hands were really fast.

Gianfranco Rosi: He was really difficult to fight because he was so awkward, that’s why it was so hard for me to keep up with him. He was real mobile, bobbing and weaving, real unpredictable, the punches and movement he had.

Rosi: He knew he was awkward and he really used that against me and that’s how he beat me those two times. Nobody else befuddled me like Rosi did.

Barkley: He had a really good chin. He got beat by some people but the big fights he got in, like Thomas Hearns he was hanging in there, he didn’t get dropped, he [mostly] lost on points. He was a cruiserweight coming down to ’68.

Barkley: I’d have to say Barkley, he came in at me and started swinging. He was the only one who stopped me.

Diaz: He had real good foot movement and he had good punches. He moved around and did not get hit. I started to notice, I said, ‘I can’t box this guy because he’s slicker than I am. I’m going to have to start banging with him and put him in one of those corners and try to beat him that way.’ That’s what I had to do. Elio Diaz was the slickest fighter I fought.

Barkley: I want to say Barkley because he just winged right through me. He didn’t have the skills of Elio Diaz, he was out-boxing me. Barkley was out-banging me.