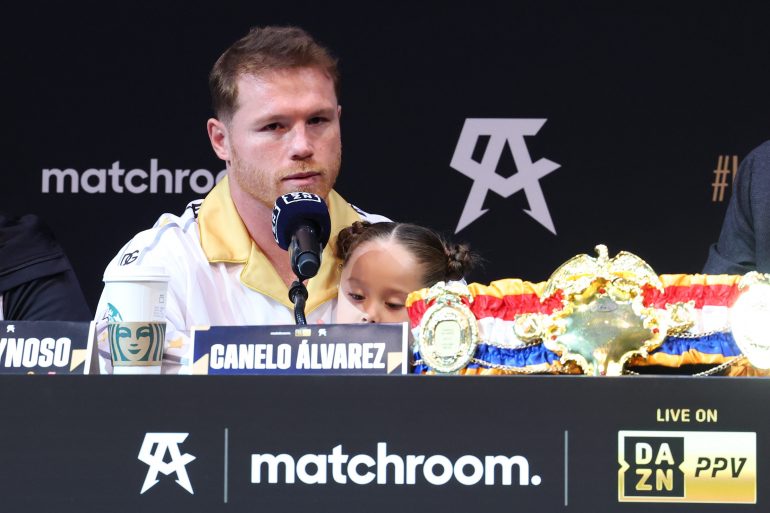 Saul Alvarez speaks at the final press conference ahead of the Matchroom Boxing card on Saturday, May 7, 2022 at the T-Mobile Arena in Las Vegas. Photo by Ed Mulholland/Matchroom.
05
May
by Diego Morilla

Fighters usually psyche themselves up during the pre-fight buildup by diminishing and belittling their foes as the fight draws near. But the approach seems to be completely different for Canelo Alvarez and Dmitry Bivol.

In their last appearance before the press ahead of their Saturday, May 7th clash in Las Vegas’ T-Mobile Arena with Bivol’s light heavyweight title at stake, the combatants were interviewed on stage by Matchroom’s Eddie Hearn in what turned out to be a casual chat that was mostly centered on how the fighters feel this is a challenge for themselves and their own place in history rather than an opportunity to showcase their power in a punishing and bloody battle.

“I feel very proud to represent my country in Cinco de Mayo weekend. I feel blessed representing my country,” said Alvarez, in his already fluent English. “(Bivol) is a really good fighter and a really good champion, we know that. We trained for him, he has a lot of skills and a lot of experience as an amateur. He is a solid champion at 175, but I know that and I am ready. I believe in my skills and I am very confident about how strong I am.”

When asked about his role as a challenger in this fight after more than 20 bouts as a champion, Canelo replied that “I like that challenge. I just want to make history, and this kind of challenge is going to put me in the boxing history books. I feel alive when I have this kind of challenges. I respect the skills of Dmitry Bivol but it’s my time and I feel in my prime. I enjoy these kind of moments.”

Leaving behind his Ring super middleweight belt along with the four major belts from all the relevant organizations was a foregone conclusion for Alvarez.

“I beat all the champions at 168, so for now I am OK in that weight. I need to take all the challenges for myself, not just to make history. I need to feel that kind of challenge. To go out at 175 and have the opportunity to earn another title it’s amazing for me.”

Hearn’s question on the dangers of his foe’s hunger for a career-defining win against the best fighter on the planet was met with enthusiasm rather than fear from Canelo.

Bivol: “I want to keep my belt and I want to win”

“I am really glad I got the opportunity. I asked my team many, many years to face the best guys in the light heavyweight division, and now I have this fight. I am focused on May 7 now, I hope we will have a great fight,” said Bivol in English. “Every time I get in the ring I believe in my victory. If you don’t do it, you will never win. I am in boxing since I can remember, since I was 5-years old. When I was 16 I was a two-time world champion as an amateur. It means a lot. And now I have 19 fights, I have a belt and I am a champ, so why not?”

When reminded that he will be the taller and likely the heavier fighter in the ring on fight night, Bivol said that this was not enough to beat a fighter of Canelo’s caliber.

“In a fight like this you have to use all of your advantages. Use all of the mistakes of your opponent. I want to keep my belt and I want to win. Of course I respect him, he is a great champion. This is the challenge for me, not only keep my belt but (also) check my skills against one of the best fighters.” 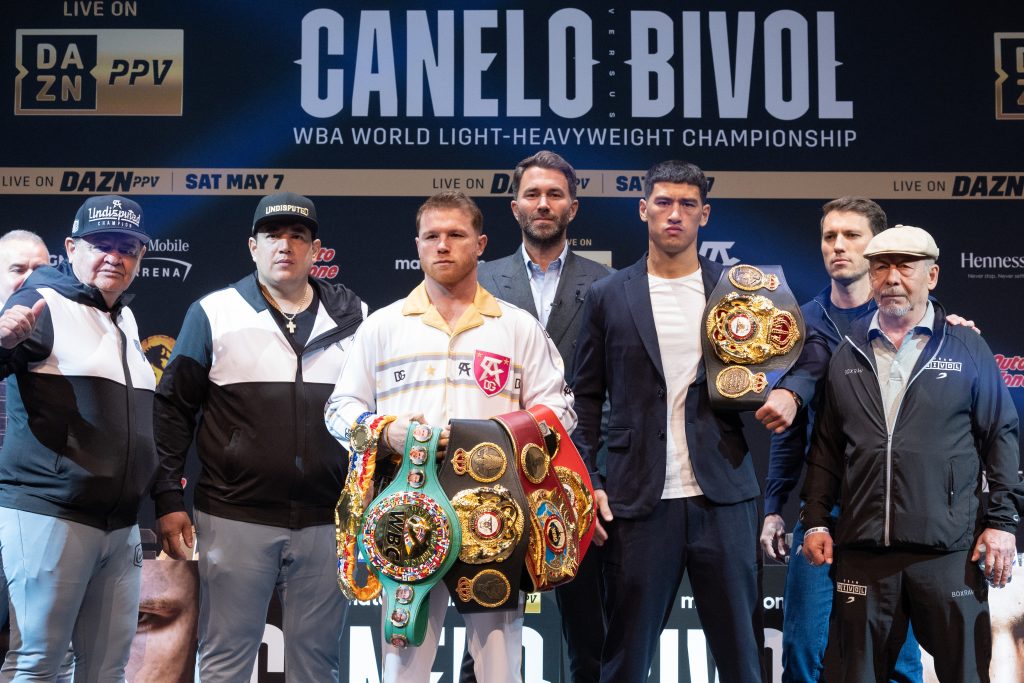 Saul Alvarez and Dmitry Bivol pose at the final press conference ahead of the Matchroom Boxing card on Saturday, May 7, 2022 at the T-Mobile Arena in Las Vegas. – Photo by Ed Mulholland/Matchroom.