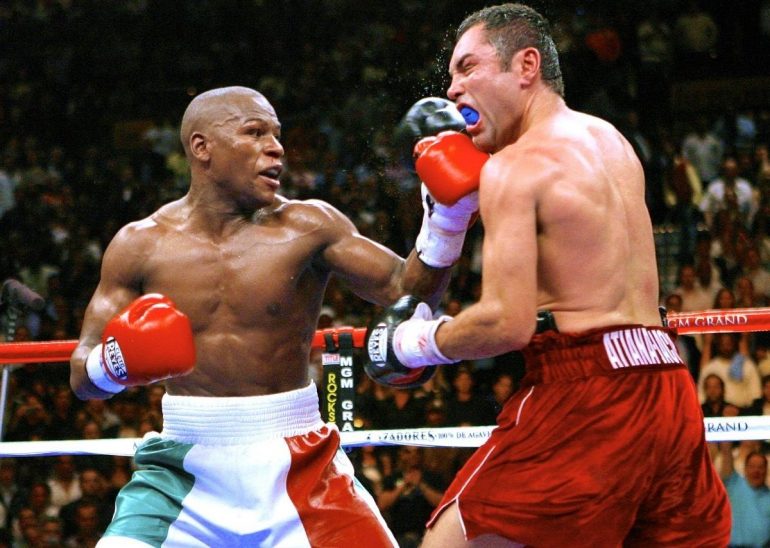 For a time, this was the richest fight in boxing history.

Despite having been largely inactive, De La Hoya remained the biggest star in world boxing. “The Golden Boy” ended a 20-month hiatus in May 2006, when he outclassed and battered the bombastic Ricardo Mayorga to a sixth-round stoppage defeat. Mayweather was ringside and made it clear that he would be willing to move up for a money-spinning pay-per-view showdown and a chance to become a five-division world titleholder.

Mayweather had risen through the weights quickly and was in great form coming in. In his previous four outings, he’d demolished Arturo Gatti (TKO 6) at 140 pounds; schooled Sharmba Mitchell (TKO 6) in his 147-pound debut; bullied Zab Judah (UD 12) to claim his first welterweight title; and all but shutout Carlos Baldomir (UD 12) to unify.

Not only did Mayweather need to deal with De La Hoya’s undoubted quality as a fighter, he was also the much smaller man. At the official weigh in, the challenger came in four pounds beneath the junior middleweight limit at 150 pounds, whereas De La Hoya looked in spectacular fighting shape at 154. The champion also benefitted heavily from the rehydration process and Mayweather was reported to have dropped weight before fight night.

De La Hoya got off to a fabulous start. Buoyed by the challenge in front of him , he was on red-hot form and applied plenty of educated pressure. Instead of just throwing punches at his elusive foe, he forced Mayweather to move into the shots and had him flustered with a sustained body attack. However, as the rounds progressed, Mayweather utilized his tremendous ring IQ and hand speed. He took away De La Hoya’s jab with a sharp counter right and switched the angles constantly. The champion had slowed down just enough in the mid-to-late rounds for Mayweather to take advantage.

The bout did 2.4 million PPV buys in the United States, smashing the previous record of 1.99 million for Evander Holyfield-Mike Tyson 2. The total revenue generated for De La Hoya-Mayweather was approximately $165 million.