On this day: Floyd Mayweather edges past Marcos Maidana 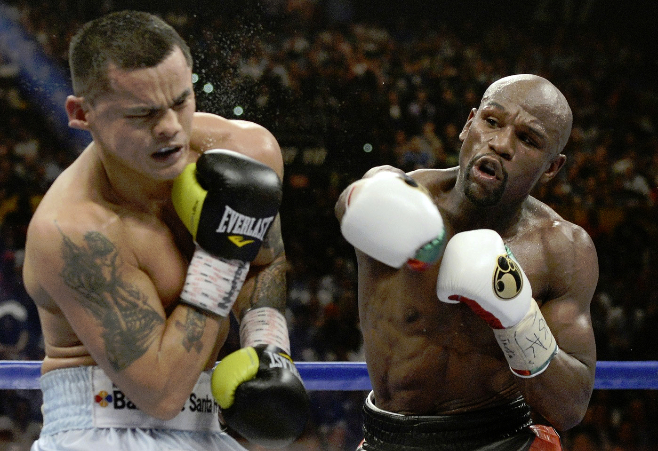 Photo by Naoki Fukuda
03
May
by The Ring

The self-proclaimed TBE had a close one this time.

On May 3, 2014, Floyd Mayweather successfully defended the Ring and WBC welterweight titles and added the WBA version to his collection by scoring a 12-round majority decision over the hard-hitting Marco Maidana at the MGM Grand in Las Vegas. The official scores were 117-111, 116-112 and 114-114.

Mayweather, who was then regarded as the No. 1 pound for pound fighter in the world, entered the ring with a 44-0 record and was a prohibitive 12-1 favorite. The sport’s biggest star was coming off one of his finest ever performances; a masterful 12-round decision win over the previously unbeaten Canelo Alvarez in September 2013.

Maidana was also on great form coming in. The Argentinian pressure-fighter won the WBA title by flooring then-unbeaten Adrien Broner twice on his way to claiming a sensational 12-round unanimous decision. While Broner was no Mayweather, the styles were similar, so Maidana had the perfect preparation ahead of his biggest opportunity.

The challenger flew out of the blocks in Round 1 and attacked with everything he had. Mayweather avoided some fight-ending shots and countered with sharp single blows, but he was clearly flustered by his opponent’s spirited aggression. Maidana fought the fight of his life and his savage relentless attacks frequently trumped the champion’s vastly superior skillset. In the end he fell short, but Maidana’s brilliant showing earned him a direct rematch and a significantly bigger payday.

The return fight took place four months later and a more mobile Mayweather was the clear winner on points.