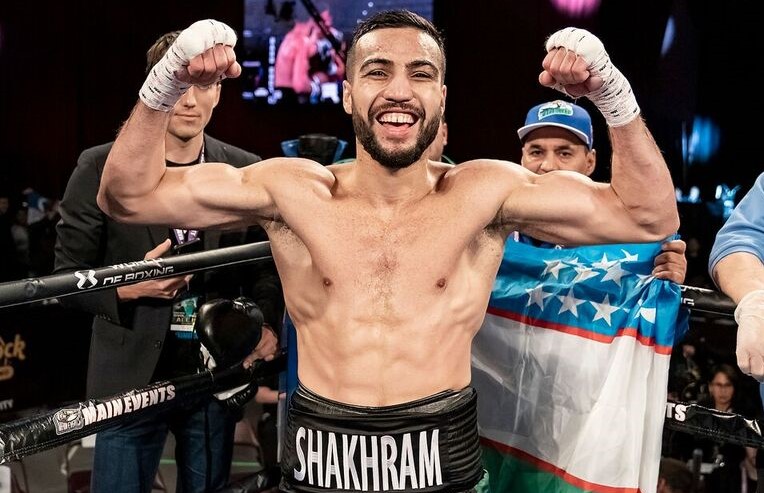 Former amateur standout and unbeaten prospect Shakhram Giyasov has moved quietly since turning professional in 2018 but all that’s about to change.

Giyasov, who won silver at the 2016 Rio Olympics, will face Christian Gomez over 10 rounds on the undercard of the Canelo Alvarez-Dmitry Bivol light heavyweight showdown at the T-Mobile Arena in Las Vegas on Saturday.

“I am very excited to be a part of this legendary card and to perform for all of the fans worldwide,” Giyasov (12-0, 9 knockouts) told The Ring through Alik Frolov. “The world will watch this event, and I believe all the fights on the card will get a lot of attention.

“I look forward to my fight and setting a good tone for the main event. This is a big opportunity for me.”

The 28-year-old Uzbekistan-born fighter will be competing for the first time since he won a lopsided 10-round unanimous decision over Christian Coria last December.

The strain of making 140 pounds was evident, and both he and his team have made the decision to move north to welterweight.

“I struggled in my last fights and felt like I was losing too much weight to make 140,” he said. “I want to try something new. I believe that a change will help me in growing my game.”

Giyasov is excited about the opportunities that are sure to come his way at 147 pounds in the not-too-distant future.

“I am ready for anything,” he stated “First I want to see how I feel on Saturday and go from there. I will aim to prove myself at the top level. There are many top-level guys in the division.”

“We have been looking for more significant opportunities for Giyasov for some time now,” said Kornilov. “Now, in the new weight class, we hope that Giyasov will feel comfortable and progress quickly through the ratings.”

Gomez (22-2-1, 20 KOs) turned professional in 2013. The Mexican won his first eight fights before being narrowly outpointed by Elliot Cano (SD 8). He reeled off eight wins before again tasting defeat at the hands of Daniel Echeverria (TKO 8). The 28-year-old has won his last six, taking Perez Sanchez’s unbeaten record last June on a ninth-round stoppage.

DMITRY BIVOL: I HAVE BEATEN EVERYBODY THAT I’VE FOUGHT, I BELIEVE I CAN BEAT CANELO

Canelo vs. Bivol, plus undercard action, will be broadcast on DAZN Pay-Per-View (in the U.S. and Canada). The show is also available via PPV.COM.