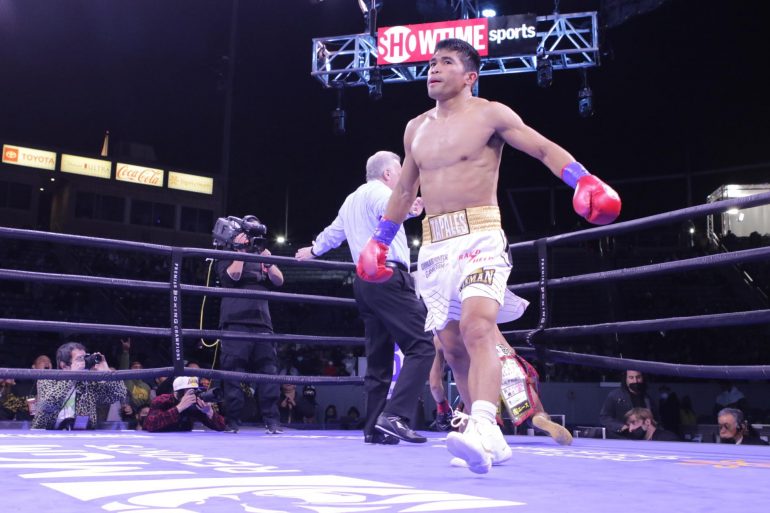 Marlon Tapales walks off after demolishing Hiroaki Teshigawara in two rounds. Photo by Jhay Oh Otamias
01
May
by Ryan Songalia

Marlon Tapales will be staying busy while he awaits his mandatory title shot, facing Jose Estrella on May 14. The eight-round fight will take place at the Dignity Health Sports Park in Carson, Calif., on the undercard of the Jermell Charlo vs. Brian Castano rematch.

Tapales (35-3, 18 knockouts) will be facing the 32-year-old trial horse Estrella (23-18-1, 16 KOs) as a stay-busy assignment while he awaits his IBF mandatory shot against IBF/WBA unified junior featherweight titleholder Murodjon Akhmadaliev, who will be fulfilling his WBA obligation on June 25 against Ronny Rios.

Tapales, a native of Lanao del Norte province in the Philippines, has been in Los Angeles for the past ten months, training with Ernel Fontanilla and Ting “Sugar” Ariosa for his elimination bout last December, which he won after knocking out Hiroaki Teshigawara in two rounds.

He had left the Philippines when his first son was just two months old, and he says the sacrifice he has made has made him hungrier to bring a world championship home to his growing family.

“My son is the one who gave me strength so I keep training here,” said the 30-year-old Tapales, a former WBO bantamweight titleholder who is rated no. 9 by The Ring at 122 pounds.

“I worked harder and stayed motivated to become world champion again for my baby.”

Tapales isn’t expecting to have much trouble with the 32-year-old Tijuana native Estrella, who is coming off a third round knockout loss to Saul Sanchez last December, and has lost his last seven bouts in the United States.

“I think this is a good fight for Marlon to keep him active. The opponent will give him some work to stay sharp for his fight with MJ,” said Jim Claude Manangquil, who co-promotes Tapales alongside MP Promotions. Manangquil says he expects Tapales will get his title opportunity by the end of the year.

The Tapales-Estrella bout will have a non-title weight limit of 124 pounds.