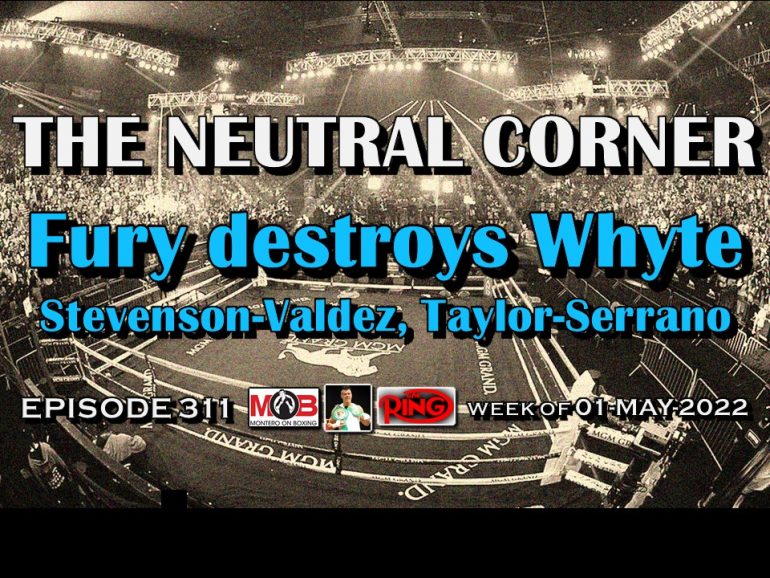 On episode 311 of The Neutral Corner boxing podcast, host Michael Montero was joined by Erickson “The Hammer” Lubin, who lost a tough fight against Sebastian Fundora two weeks ago in Las Vegas. Lubin (24-2, 17 knockouts) suffered a separated right shoulder and a minor break in his nose during the fight, but remains in good spirits.

“I feel great,” he told The Ring. “I feel like the fight was a rough battle, it was a war. Sebastian and I gave it our all. I feel great emotionally.”

“Physically, I was pretty beat up for a week or two, but I’m good now. I’m doing a little rehab on my (right) shoulder. I’ll be good for the end of the year.”

Although Lubin injured his shoulder in the third round against Fundora, but didn’t notice it right away. “It took a while because my adrenaline was rushing,” he said. “In the middle rounds I started to notice that my jab hand wasn’t really strong. Even before I dropped Fundora in the seventh round, I knew something was wrong. There was pain, but I ignored it. I was in a battle.”

On Thursday, April 21 in California, Mercito Gesta won a unanimous decision against Joel Diaz Jr in a ten-round lightweight bout. The fight headlined a Golden Boy Promotions card that was broadcast on DAZN.

On Saturday, April 23, RING/WBC heavyweight titleholder Tyson Fury scored a TKO win over mandatory challenger Dillian Whyte in London. After a slow start, Fury quickly began to dominate and landed a beautiful right uppercut that dropped Whyte in the sixth round. Whyte made it to his feet but was in bad shape, prompting referee Mark Lyson to stop the bout. A crowd of more than 90,000 packed Wembley Stadium to see the fight, which headlined a Queensbury Boxing card that was broadcast on ESPN PPV in the United States.