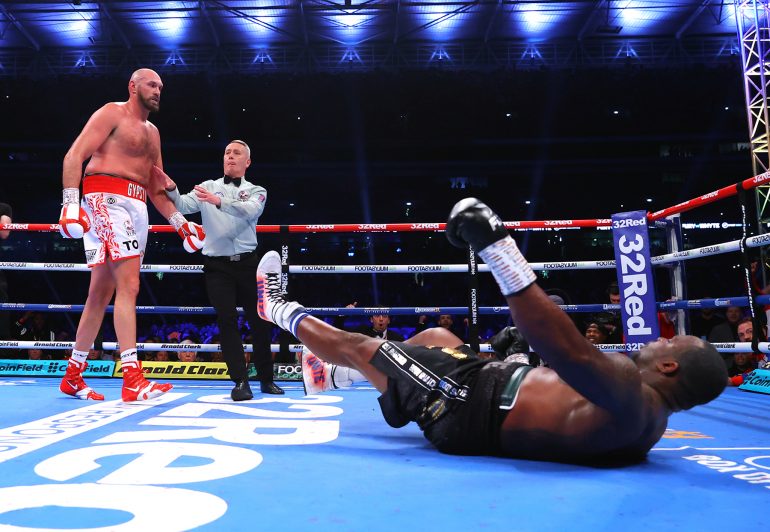 Fury drops Whyte in Round 6 to end their championship fight at Wembley Stadium. Photo by Mikey Williams/Top Rank Inc via Getty Images
24
Apr
by Tris Dixon

It was the type of performance Detroit’s brilliant trainer Emanuel Steward would have loved.

The late Kronk legend would doubtless have been thrilled seeing Tyson Fury’s one-sided dissection of Dillian Whyte in front of thousands upon thousands of adoring fans at an electric Wembley Stadium.

Fury was brutally precise, breaking Whyte up with rapier jabs, peppering his body and finding his range and distance with the right hand. The Ring’s heavyweight champion more than matched Whyte in close, with the rough stuff and when the end came, it was picture perfect.

Tyson got Whyte’s interest with a jab or two, and then split his guard with a right uppercut that will be repeated on highlight reels for years to come.

Fury called it “a perfect night” and it was for him.

The atmosphere was terrific, the ringwalks and the accompanying pyrotechnics reverberated for miles and the national football stadium was turned into a boxing cauldron.

Steward loved aggressive fighters. The stories about the Kronk have become part of boxing lore and he would sometimes scold his heavyweights, like Lennox Lewis and Wladimir Klitshcko, for not turning the screws and asserting their advantage when in dominant positions in fights.

Last night, no sooner had Fury shown he had an answer for just about everything Whyte could fathom – including starting the fight as a southpaw – then Fury lowered the boom and closed the show dramatically. There was no carrying of an opponent, there was no playing with his food, and there was no caution to the wind. He deciphered the code, picked the lock and scrambled Whyte’s senses.

Fury ticks so many boxes as a heavyweight force, some doubters more than 10 years ago thought he would never be able to do. For years, plenty said he didn’t punch his weight but he clearly does, he finds, controls and maintains range wonderfully well, his head movement – both side to side and circular – is unique and hugely underrated, along with his triphammer reflexes and feints which often deny opponents room to get set or be balanced in their efforts to move forwards or back. Fury changes directions as he moves, left to right, right to left, he applies pressure and he backs up, all the while often the boss of who is going where, and his jab is masterful, from the hip, from the shoulder, singles, doubles and starting and finishing combinations with it. He also switches lefty, just to keep things interesting.

But what the late Steward probably would have loved most about what the man he worked with many years ago did was put his foot on the gas to finish the fight. Fury could have sauntered at that pace for all 12 rounds, and many previous champions might have. But Fury was patient for only as long as he needed to be. Then he was merciless.

The uppercut has been Whyte’s undoing before and it’s a shot Fury was always likely going to line up at some point. Afterwards, Tyson spoke of the success of his check left hook but said of the uppercut, “I didn’t want to let them go too early because he was blocking the straight,” Fury said. “I was softening him up with the jab because I didn’t want to get involved with a brawl.”

Fury talked about a future contest with MMA star Francis Ngannou and the possibility of a WWE event in the UK with Drew McIntyre this year. He maintained it was his last professional boxing fight, said he didn’t care what happened when Oleksandr Usyk and Anthony Joshua rematched later this year (“I just don’t give a damn”) and, when asked for a definitive answer on his future said, “I definitely think so” about retirement. So definitely maybe.

Whyte was a good fighter made to look ordinary. Too many will stick the boot in but no one will be more disappointed about what happened last night than him. He never got out of the starting blocks.

And, by the end of Round 6, that was that. After a fight that was almost as one-sided as the press conference to announce the fight, which Whyte didn’t attend, Fury said: “I’ve done everything asked of me. I’ve done more promotion, more interviews than anyone. I go above and beyond to promote these shows. I’ve given 20 years to boxing – amateur and professional. I’ve had my brains knocked out. I’ve been put down, I’ve been dropped, I’ve been cut, I’ve had tough fights, I’ve had draws, I’ve had wins, I’ve gone all over the world. How much blood can you get out of a stone. I’ve given everything to you guys, put everything on the line every single time and enough is enough.”

He attended the post-fight press conference with trainer SugarHill Steward by his side. Both were topless. It was the Fury show, after all, so convention no longer matters. SugarHill is one of the surviving links to Steward and even Sugar appeared to find the whole evening surreal.

The Fury story likely as many twists and turns ahead but from a boxing perspective you can see the red and gold of the Kronk oozing from his gloves, and his mindset.

“He would have thought Tyson was exceptional,” said Hill, the morning after the night before. “It was a great way to get the knockout, it was Fury style and the Kronk style. Tyson Fury is the biggest puncher in boxing. People doubted me when I said that. Name a bigger puncher than Tyson Fury? He’s the whole package. Lennox had that attitude, rough, rugged and raw. Wladimir was superior technically. Tyson Fury has got it all.”

You can be certain Emanuel Steward would have loved it.