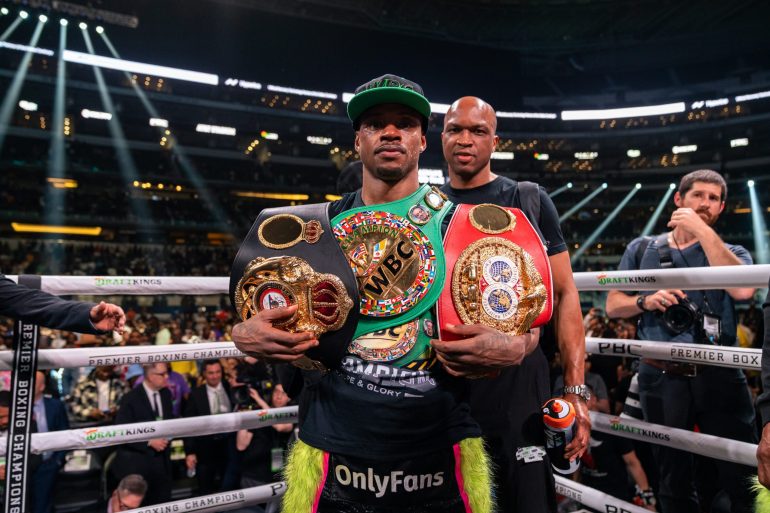 A simple reply Tweet to a frequently asked question The Ring receives from fans (via social media, email and even letters) – how/why is Errol Spence rated ahead of Terence Crawford at welterweight but Crawford is rated ahead of Spence in the pound-for-pound rankings? – has received more than 450 likes (along with a fair amount of retweets and comments, since Friday):

Spence is the more accomplished welterweight, but Crawford has been dominant over three weight classes.

Most boxing fans get the concept, which was the gist of the Ring Ratings Panel’s decision on how to rank Spence at welterweight and within the pound-for-pound top 10 following his impressive 10th-round stoppage of Yordenis Ugas on April 16.

The Panel voted to advance Spence (28-0, 22 KOs) to No. 1 in the welterweight rankings, a position he had held before Crawford overtook him after stopping Shawn Porter in 10 rounds last November. Versus the No. 3-rated Ugas, Spence appeared to regain the high-volume, relentless and surgical pressure-fighting technique he wielded prior to a serious car accident in late 2019.

Spence, who won the IBF title by stopping Kell Brook in 2017 and then annexed the WBC belt with a split decision over Porter in 2019, added the WBA strap to his collection with his domination of Ugas (27-5, 12 KOs). Crawford (38-0, 29 KOs), a former Ring Magazine champion at lightweight and junior welterweight, has held the WBO 147-pound title since he stopped Jeff Horn in 2018.

As usual, panelist Anson Wainwright kicked off the discourse and debate. 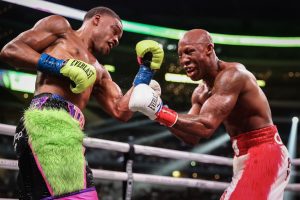 “Spence added the third world title but I don’t see him jumping over (No. 4-rated Naoya) Inoue (in the pound-for-pound rankings), (so he) maintains his position.

“I’m torn on whether to bring him back to No. 1 (at welterweight). Spence stopped Ugas in Round 10 of a (title) unification bout. It was more exciting than I expected. (It was the) first time we have seen Spence shook but he also put himself out there more than I expected. The win deserves a move up but does he go above Crawford? For me, he has a better resume than Crawford at 147 so I’d say yes.”

Managing Editor Tom Gray agreed with moving Spence back to No. 1, but disagreed with keeping him at No. 5 in the pound-for-pound rankings.

“Naoya Inoue is my favorite fighter in world boxing, but his momentum has stalled,” Gray said. “Since the epic battle with (Nonito) Donaire, he’s stopped Jason Moloney, (Michael) Dasmarinas and (Aran) Dipaen. Only the first one of those wins means anything. I know the pandemic would have played a major part in where Naoya could fight, and opponent selection, but we can only go with what we have. Spence largely dominated Ugas and got the stoppage. I think he deserves a one-spot jump.

“We probably pissed off Spence by putting Crawford above him (at welterweight) following the Porter win. Let’s piss off Crawford by putting him back. You never know, maybe they’ll get the picture that we’re pretty anxious to see who’s really No. 1.”

Panelist Diego Morilla agreed with Spence being the No. 1-rated 147 pounder but no higher than No. 5 in the mythical rankings, for now.

“I don’t see Spence over Inoue at this point, but he’s inching closer with every fight,” Morilla said. “Hopefully we’ll get Spence-Crawford sometime this decade and we’ll be able to reshuffle that 3-4-5 area properly.”

Panelist Martin Mulcahey is firmly Team Spence at this point.

“I was Team Crawford until (April 16), that was as comprehensive a beatdown of a very good opponent (Ugas) that I have seen of recent vintage,” Mulcahey said. “I now favor Spence in that head-to-head match-up slightly. The margins at P4P are so slim I gotta go with the hot hand here, and right now it is Spence. So, I am for moving him above Inoue for now. And, if Inoue beats Donaire convincingly I think he goes above Spence… kinda glad the P4P is not stagnant.

“Put me in the crowd that sees Errol Spence as the No. 1 (welterweight), which was not the case before this, but I stand corrected on any doubts I had about his ability to come back from his many injuries.”

Panelist Daisuke Sugiura grudgingly agreed with Spence advancing ahead of his countryman in the mythical rankings. 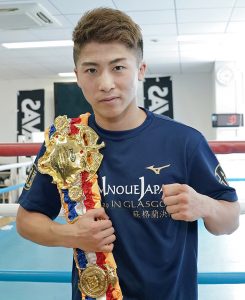 “I think Inoue is a better fighter than Spence, but I also think Tom’s argument is pretty solid,” stated Sugiura. “Again it’s not Inoue’s fault, he probably would have fought Casimero, Oubaali, and Donaire to unify and already moved up (to 122 pounds) without the pandemic but it is what it is.

“Spence did better than my expectations. Stopping Ugas is impressive, and the quality of his last three opponents are much stronger (than Inoue’s). So, I support Spence over Inoue for now. As Martin says, we can talk about this again after the Inoue-Donaire rematch.”

Panelist Michael Montero backed Spence’s move to the top of the welterweight rankings, but added that Ugas (who Wainwright suggested remain at No. 3) be dropped down the top 10.

“I feel Spence has earned the No. 1 spot at 147-pounds,” Montero said. “Bottom line, he has three belts and Crawford has one. However, I also think we need to drop Ugas. He didn’t look like the third-best WW in the world on (April 16). The Cuban’s claim to fame is having a close fight with Porter and beating a half-retired (Manny) Pacquiao. Would any of you favor Ugas over (No. 4 Jaron) Ennis, (No. 5 Victor) Ortiz or even (new No. 6 Eimantas) Stanionis? I sure wouldn’t. Also, I think (Conor) Benn and Stanionis earned a bump last weekend.”

“I wouldn’t drop Ugas. That win over Manny, who had beaten Thurman, trumps any leading win from the others. Definitely worth debating though.”

Wainwright defended his suggestion to keep Ugas at No. 3.

“I wouldn’t drop Ugas for the reason Tris said,” Wainwright stated. “I also want to see the three young guns get the wins to bump them up further.”

Gray also stated that he wanted Ugas to retrain his pre-fight rankings.

Wainwright suggested a re-calibrated welterweight top 10 that did not include Radzhab Butaev (who dropped a split decision to Stanionis on the Spence-Ugas undercard) and had Conor Benn up a spot (from No. 10 to No. 9, following his second-round KO of Chris van Heerden), and that did not sit well with Yours Truly.

“I think Conor Benn is an up-and-comer, but it feels odd to me to have him climb a spot off a KO of a shopworn veteran while Butaev, who lost a competitive fight to a legitimate fellow contender, gets booted from the rankings,” stated your favorite Editor-In-Chief. “I suggest Butaev dropping to No. 10.

“I’m good with Spence climbing to No. 1 at welterweight and staying put in the P4P.”

Panelists Adam Abramowitz, Mulcahey and Montero, plus Gray, agreed with keeping Butaev in the rankings. Even Wainwright came around.

The welterweight division was busy, but there were also Ring ratings changes in 13 other weight classes over the past four weeks.

Pound-for-Pound – Spence remains at No. 5.

Middleweight – Gennadiy Golovkin remains No. 1 after an IBF-WBA title-unifying ninth-round stoppage of Ryota Murata, who drops to No. 7.

“It seems a bit unfair for Murata to drop under Eubank Jr. and Alimhanuly,” said Gray, “but a stoppage loss is a stoppage loss, so No. 7 sounds accurate.”

Junior middleweight – Sebastian Fundora advances to No. 2 after eight rousing rounds against  Erickson Lubin, who drops to No. 7. Tony Harrison advances to No. 6 after outpointing unrated Sergio Garcia. Tim Tszyu remains at No. 5 after a 12-round unanimous decision over unrated Terrell Gausha. 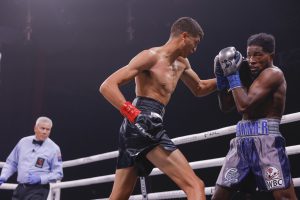 “Erickson Lubin and Sebastian Fundora traded knockdowns in an exciting fight,” said Wainwright. “However, it was Fundora who prevailed when Lubin’s corner pulled him out between the eighth and ninth rounds. Tony Harrison scored a 10-round unanimous decision over Sergio Garcia. When Harrison is on it, he’s a handful.”

Wainwright was also impressed with Tszyu.

“Tim Tszyu got off the canvas in the opening round to widely outpoint gutsy Terrell Gausha,” he said. “It’s a bit of a leap but I’d move Tszyu to No. 2. He’s active, doing well and that trumps Hurd and Lara.”

Countered Abramowitz: “I wouldn’t raise Tszyu at all. Everyone ahead of him has far better resumes. And let’s not forget that Gausha wasn’t ranked. Tough, capable fighter, but not more than that. Lubin already beat him and has other better wins.”

Added Gray: “Still seems INSANE to me that we have Hurd rated at 154, never mind Top 5. He hasn’t made the weight in almost three years and is coming off an upset loss a few pounds above. Can anyone find out what his intentions are? I’m cool with the rest of the order although I think there’s a case for Harrison to jump over Tszyu.”

Junior welterweight – Regis Prograis holds onto his No. 1 spot following a sixth-round stoppage of unrated Tyrone McKenna. Jose Zepeda remains at No. 3 following a first-round blowout of journeyman Francisco Javier Perez. Sandor Martin remains at No. 10 following a lopsided 10-round decision over Jose Felix.

“Jose Valenzuela added his name to an already white hot division with a first-round knockout of Francisco Vargas,” noted Wainwright. “Vargas is well past his prime but a good name for Valenzuela to have on his record.”

Junior lightweight – Miguel Berchelt exits after being knocked out by Jeremiah Nakthila in a lightweight bout. O’Shaquie Foster advances to No. 8 after a decision over unrated Muhammadkhuja Yaqubov. Eduardo Ramirez enters at No. 10.

“He’s off the radar but Albert Bell is inching towards the top 10, keeping busy and a classy boxer in a division that lacks depth,” noted Mulcahey.

Featherweight – Josh Warrington advances to No. 4 after a seventh-round stoppage of Kiko Martinez, who drops to No. 7.

“Good to see Ruben Villa back, he scored a nice ninth-round stoppage over Horacio Garcia,” noted Wainwright. “Villa is just on the fringes of the top 10.”

Bantamweight – Nordine Oubaali exits after announcing his retirement. Jason Moloney advances to No. 4 (on attrition), but following a 10-round decision over journeyman Francisco Pedroza Portillo. Jonas Sultan enters at No. 10.

Junior bantamweight – Andrew Moloney remains No. 10 following an eighth-round KO of Gilberto Mendoza (the California journeyman, not the WBA president).

“Norbelto Jimenez won a decision over Keyvin Lara and may be our next guy in at 115,” noted Wainwright. 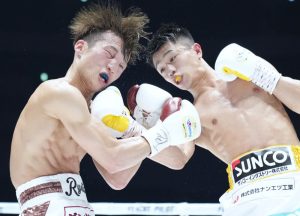 “Junto Nakatani looked mighty impressive beating up Ryota Yamauchi and forcing the eighth-round stoppage,” said Wainwright. “For my money, Nakatani is the best flyweight in the world.”

Countered Gray: “Loved Nakatani. Turned in the performance of the weekend (April 9) for me. I’m not completely against him entering at No. 1, but (Julio Cesar) Martinez and Edwards have the better standalone victories. I think a jump to No. 1 for beating the No. 10-rated contender is generous.”

Countered Morilla: “Nakatani has a better resume overall, I think No. 1 is a great place for him.”

Junior flyweight – Kenshiro Teraji advances to No. 1 after an impressive revenge rematch third-round KO of Masamichi Yabuki, who drops to No. 8. Agustin Gauto exits after suffering a second-round stoppage loss to unrated Miel Fajardo. Sivenathi Nontshinga enters at No. 10.

“That was an excellent performance by Teraji,” Wainwright said. “It reminded me of Lennox Lewis (handled) Hasim Rahman (rematch KO).”

Strawweight – Petchmanee CP Freshmart remains at No. 2 following a 12-round unanimous decision rematch victory over Wanheng Menayothin, who remains at No. 3. Ginjiro Shigeoka advances to No. 8 after a 10-round decision over Tatsuro Nakashima.

“Petchmanee CP Freshmart proved his first win over Wanheng Menaythin wasn’t a fluke by retaining his WBC title with a 12-round unanimous decision,” said Wainwright. “I could see Petchmanee jumping to No. 1 and Wanheng keeping his No. 3 spot.”

Countered Abramowitz: “Knockout Freshmart has an excellent body of work at 105 pounds and I think he deserves to stay No. 1.”