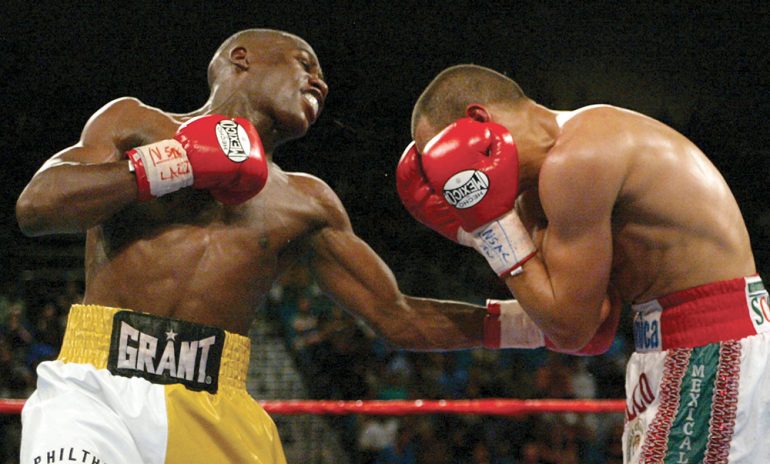 Floyd Mayweather Jr digs a hook to Jose Luis Castillo during their hotly contested, controversial first bout, which had the WBC and Ring Magazine 135-pound titles on the line.
20
Apr
by The Ring

On April 20, 2002, Floyd Mayweather scored a 12-round unanimous decision over Jose Luis Castillo to win the vacant Ring lightweight championship as well as the Mexican’s WBC crown at the MGM Grand in Las Vegas. The official scores were 116-111, 115-111 and 115-111.

Mayweather was a 4-1 favorite coming into the bout. The lightning-quick American had already captured the WBC title at 130 pounds and knocked off the likes of Genaro Hernandez (TKO 8), Angel Manfredy (TKO 2) and – in a stunning performance – Diego Corrales (TKO 10). Known at the time as “Pretty Boy,” Mayweather was already a pound for pound entrant.

Castillo had lifted the WBC title from the brilliant Stevie Johnson in what was later named The Ring’s Upset of the Year for 2000. A draw with Johnson in the rematch allowed him to keep his belt, and he halted Cesar Bazan (TKO 6) in January 2001. Well respected and battle hardened, Castillo was regarded as the best lightweight in the world.

It was a fight of two halves. Mayweather boxed well from the outside over the first five rounds, but Castillo was soon closing the gap. The champion made it rough and capitalized up-close with a fierce body attack and some well-placed left hooks.

A Castillo point deduction for hitting on the break in the eighth was cancelled out when Mayweather was penalized for using his lead elbow in the 10th. The fighters appeared to split the championship rounds and when the final bell sounded, there were many in the arena who felt Castillo had done enough.

Over the past 20 years, the matchup has served as the go to fight to diminish Mayweather’s eyepopping 50-0 unbeaten record. In reality the bout was very close, but the margins of victory in Mayweather’s favor were unsettling.

During his post-fight interview with HBO, Mayweather disclosed that he’d injured his left shoulder during the final day of training camp.

Ironically, Mayweather won a direct rematch with Castillo by slimmer margins when he appeared to have controlled the action more comfortably.