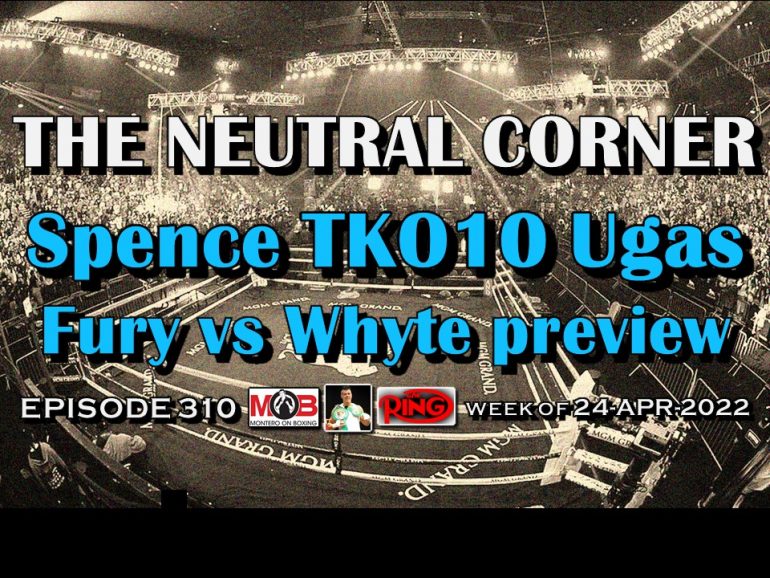 On episode 310 of The Neutral Corner boxing podcast, host Michael Montero gave a thorough review of the Spence-Ugas card, followed by a detailed preview of the upcoming heavyweight showdown between Tyson Fury and Dillian Whyte. Several listeners from the USA and UK called in with great insight from the fan perspective.

On the other side of the pond, TGB Promotions facilitated another Showtime PPV card from AT&T Stadium in Arlington, Texas. In the main event, Errol Spence Jr unified three welterweight titles with a TKO10 victory over Yordenis Ugas. After the bout, Spence (28-0, 22 KOs) called out Terence Crawford. Hopefully that fight finally happens later this year.

Before the PPV broadcast, Eimantas Stanionis and Radzhab Butaev had a welterweight war on Showtime. Stanionis, a native of Lithuania, improved to 14-0 (9 KOs) with a split decision win in a great action bout.

“I graded the whole Spence-Ugas card a B+,” said Luis. “I really enjoyed the prelims on Showtime, leading into the PPV.  It was one of those cards where I just wanted to sit on my couch, order some good food and watch boxing.”

“I expected Spence-Ugas to go all twelve rounds,” said Brian. “I don’t see Spence vs Crawford as a 50/50 fight though, I think Crawford is gonna pop him. Spence better fight Crawford next or he’s bitching out.”

“Whyte is a real contender,” said Thad, “but his gas tank is done by round eight. By the eighth round, he’s going to be vulnerable, and I think that’s when Fury is gonna take him out.”

“Spence looked great against Ugas,” said Nacho. “He looked a hell of a lot better than he did against Danny Garcia. I thought Ugas went in there with the wrong game plan, he should have tried to stick and move and much as he could.”

“If you put Anthony Joshua aside, I think Conor Benn is the biggest star in the UK right now,” said Chris. “The crowds go absolutely wild for him now. If you go to see a Conor Benn fight, you know it’s going to be fun.”