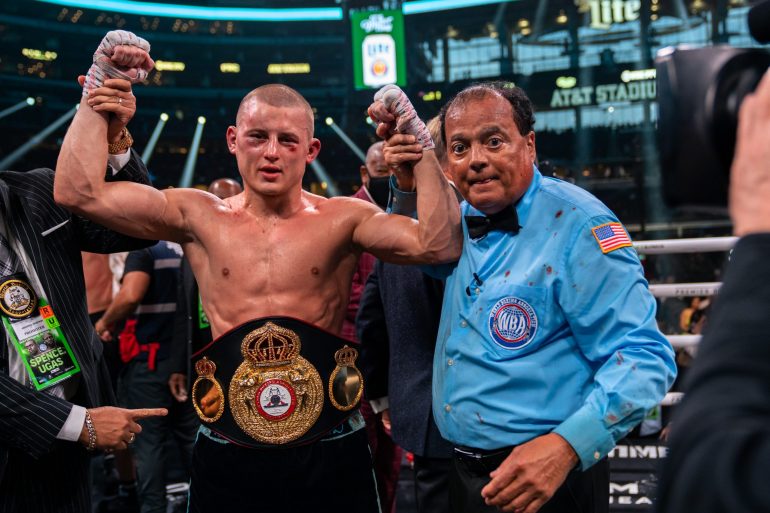 Much was expected when these two undefeated welterweights met Saturday night on the Errol Spence Jr.-Yordenis Ugas undercard at AT&T Stadium in Arlington, Texas, on Showtime Pay-Per-View on a Premier Boxing Champions event.

Behind a consistent jab, Stanionis won by split-decision and wrested the WBA secondary welterweight title from Butaev.

“I still can’t believe it,” Stanionis said. “It was a dream come true to hear, ‘and the new.’ When I was a kid, I visualized what this would look like and how it would feel to become a champion. It’s because of the hard work, dedication, belief in myself and my team to get me to this big stage. I want to thank my team for everything. What I did in the ring, they did just as much outside the ring. I’m very happy. I just want to tell everybody that dreams do come true. If you believe in it and give your everything, it will happen.

“I need to watch the fight back to give my opinion on the scores. I can’t say now with all of this emotion. It was a hard fight. I know that I did good things, but so did he. He’s a strong fighter and I think we put on a good show and that’s most important.

“The fight went like this because the referee allowed Stanionis to fight with his head down the entire time,” Butaev said. “What can I do if the guy is leading with his head down all the time? I don’t know why he took away a point from me. They should have taken the point away from him because he was diving in the whole time.”

Early on, Stanionis started well with some sharp jabs to the head, while Butaev pecked at the body. Stanionis snapped Butaev’s head back with the jab in the first. Stanionis seemed to be at a comfortable distance, while Butaev came on in the last minute of the first with a couple of stinging jabs.

In the second, Butaev was pushing Stanionis back as the aggressor. By the middle of the round, Stanionis began landing shots to Butaev’s ribs. The two crowded each other, very willing to exchange in tight quarters.

Though again, Stanionis was landing the jab very consistently. Over the first two rounds, Stanionis’ jab set the pace.

About a minute into the third, Stanionis started connecting with straight rights to Butaev’s face. Butaev couldn’t seem to find an answer to Stanionis’ high guard. At times, Butaev fought southpaw in the third. That created some openings, however, not enough to cause Stanionis to come off his approach.

As the midway point approached, Stanionis’ jab was dictating the fight, but some swelling was beginning to build under his left eye.

With 1:14 left in the sixth, Stanionis ripped Butaev with a left hook, and followed with a right to the head. In the last 12 seconds, Stanionis stepped back and connected on a right uppercut.

The seventh and eighth continued the same theme, Stanionis landing the jab, mixed in with an occasional left hook, while Butaev tried to crowd him and win the inside game by chopping to the body.

By then, Butaev’s eyes were beginning to swell. Stanionis’ face, however, began to break. A cut on Stanionis’ left eye was leaking blood, though nothing substantial.

In the closing seconds of the ninth, Butaev landed a few rights, but Stanionis returned to his corner with a smile and shaking his head.

With 2:35 left in the 10th, Stanionis reeled off a right uppercut that landed.  Though with less than 30 seconds remaining in the round, Butaev dropped a couple of rights to Stanionis’ body. It was one of Butaev’s better rounds.

As the 11th began, the right side Stanionis’ forehead was swollen. It did cause Stanionis any problems, and with :48 left in the round, referee Rafael Ramos took a point away from Butaev for holding Stanionis’ head down while he continued to punch.

That caused even bigger problems for Butaev.

As the two met for the 12th round, both fighters wore the evidence of a war on their faces. Their eyes were blotched and swollen, a side of Stanionis’ head looked like a small balloon, and his face wore a reddish hue.

With less than a minute in the fight, they stood there winging shots at each other and tangled up with one another at the final bell.

“I think that only two rounds were close, the seventh and maybe the ninth,” Lee said. “It was exactly what I expected. Perhaps I could have performed better, my combinations been a bit sharper, but it was a good fight overall.”

Lee, 22, tried engaging a few times early in the fight, but when Ochoa went into survival mode, Lee seemed to be lured in. It turned out to be a sound learning experience for Lee.

“I felt great, it was a great fight. Brandun Lee is a really good fighter, a strong fighter,” Ochoa said. “I feel I was doing really well. He caught me a little bit, but I kept my confidence, my poise and when it was time to step it up the last three rounds, I started putting the pressure on him and we went at it. I went all out. He’s never had it like that. I only got hurt one time, maybe at the end of the seventh. I know I buzzed him too.”