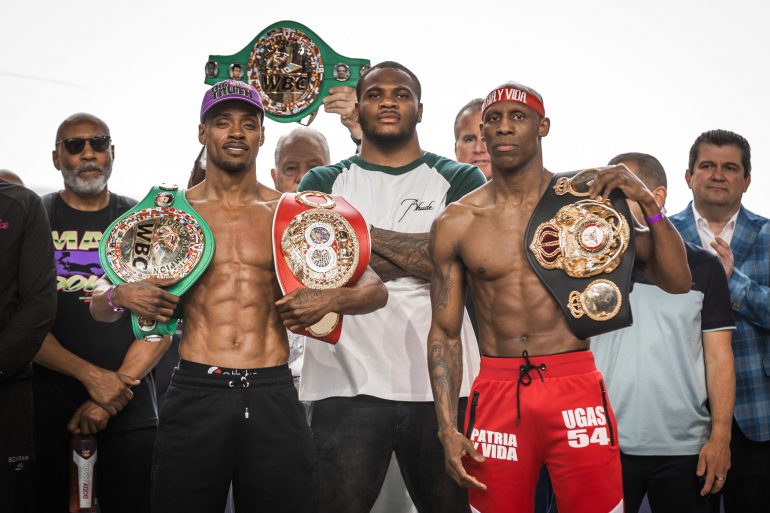 DALLAS — Raul “El Diamante” Marquez has a keen eye and a tactical mind when it comes to boxing. He grew up in the sport, was a member of the 1992 U.S. Olympic squad, and fought professionally at the highest level. That same acumen that led him to becoming IBF junior middleweight titlist in the late-1990s he carries ringside with him today breaking down fights as Showtime’s color analyst.

“For Ugas, early in his career, he took some losses, at that point in his career, he was fighting too much like an amateur, the Cuban style of boxing, running, throwing a 1-2, and then holding,” Marquez said. “Ugas didn’t know he couldn’t fight like that, and when he got with Ismael Salas, who I think is one of the best trainers out there, it brought more to his game.

Marquez stressed that Ugas knows how to create distance, that he slides more to the right or more to the left, keep turning his opponents, which will be a big component if he plans on beating Spence.

One mistake Ugas cannot make against Spence is standing in front of him for prolonged periods of time. 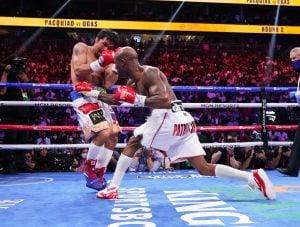 If Yordenis Ugas can use that long right against Errol Spence Jr. on Saturday the way he did in his victory over Manny Pacquiao, the Cuban has a chance, Raul Marquez says (Photo by Michael Ham/TGB Promotions).

“You don’t want to stay in front of Errol, especially Errol, who’s a grinder,” Marquez said. “That added element has Ugas out a lot. He will need create that distance and use that long, straight right hand, which landed really good against Manny Pacquiao. That’s the kind of fight he has to fight against Spence.”

For Ugas to win, the majority of the fight, Marquez pointed out, has to be fought to mid- to long range. When forced to go on the inside, Marquez noted, Ugas will need to pick his spots, and then get back on the outside.

“I give anyone who steps in the ring a chance, and Ugas has a chance, if he sticks with that gameplan,” Marquez said. “Errol Spence is a grinder. I go way back with Errol in the amateurs, because my oldest son, Raul Jr., used to fight in his weight class.

“I saw Errol beat Regis Prograis in the state tournament in Houston. Me and Derrick James (Spence’s trainer) were in the 1987 national junior Olympics together. We got way back. Ugas has to fight a very tactical fight, be very smart, pick his spots, use his right hand and know when to go toe-to-toe, and then get on the outside. 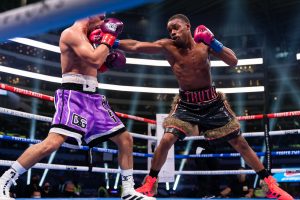 “The majority of the fight has to be fought mid- to long range, using his long jab, overhand right, lead right hand, and when he’s forced to fight on the inside, now he knows how to do that.”

Spence is a grinder, a pressure fighter who dissects opponents with his jab, and uses smart, calculating pressure, Marquez said. He will attack the body, and he invests early in body shots. As the rounds wear on, that wears on opponents. Ugas will be no different.

Ugas has been busier and he is filled with confidence.

“I’m still picking Errol, and I even asked Errol about the car accident and since his eye injury (in August 2021 when he suffered a detached retina in his left eye, giving Ugas the shot at Pacquiao on 10-days’ notice) if he’s still the same. He told me, ‘Hey, I might not be the same, but I’m ready and I feel great. I’ve been in the gym. I’ve been looking good in sparring and I’m ready to put on a show.’

“Up until Thursday, Errol had not talked about a knockout. He said that for the first time mentioning a knockout. That’s changed. Is it possible? Anything is possible, but I have my doubts when you haven’t been an active fighter for 2½ years. With the car accident and the detached retina, it will be a great comeback story for Errol.

“He took some losses. He was lost for a while. Then he found Salas, and bam, he’s back. A lot of people thought he beat Shawn Porter, I didn’t, because I thought he needed to do more to close and he didn’t.”

Ugas needs to put some pressure on Spence. One way to do that is to see how intact Spence’s left eye is. That means going after it. Salas, boxing’s version of Yoda the Jedi Master, and Team Ugas have no doubt discussed implementing that scheme into their game plan.

“Boxing is a brutal, brutal sport and Errol is like the bully in the ring, he bullies the other guy and he breaks them down, and what do you do to the kid in the playground trying to take your money away, you punch him in the face,” Marquez said. “For Ugas to have any chance, that’s what he’s going to have to do, punch Spence in the face, punch him in the eye and cause some worry, and I know it sounds bad, but boxing is a brutal sport. Only Errol knows how healthy his eye is.