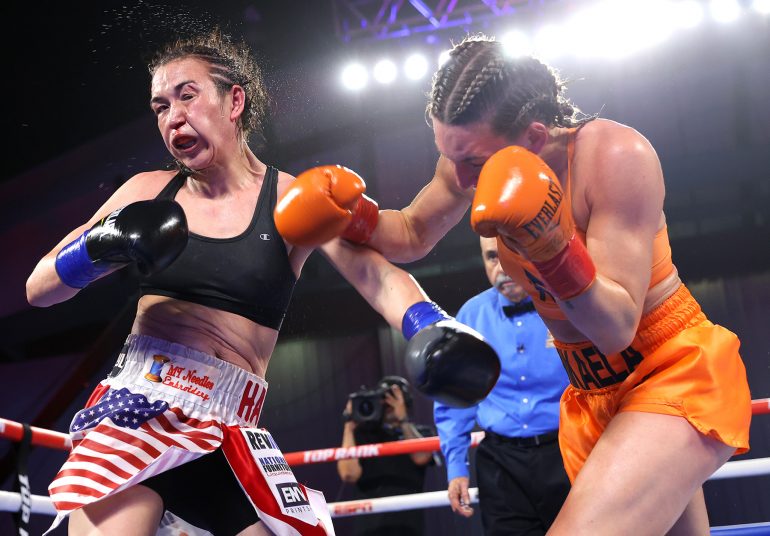 COSTA MESA, Calif. – Ring Magazine junior lightweight champion Mikaela Mayer received all she could handle from Jennifer Han Saturday night, but she was able to grind out a victory.

Mayer successfully defended her IBF and WBO world title belts, defeating Han by unanimous decision before a partisan crowd inside The Hangar at the OC Fair and Event  Center.

Saturday was a homecoming for Mayer, who grew up in the Los Angeles suburb of Woodland Hills. Mayer was coming off an action-filled unanimous decision win over Maiva Hamadouche on November 5, where she won the IBF women’s title.

From the opening bell, Mayer had to deal with a cut above her left eye that referee Ray Corona ruled was caused by a punch. Trainer and cutman Manny Robles did a good job keeping blood from coming out during the fight.

Han was game, mixing her attack and moving out of Mayer’s reach during the first three rounds of the fight. Her tactic worked until the fourth round when a right cross by Mayer stunned Han, producing blood from her nose.

Both fighters had their moments during the middle rounds, but Mayer was able to land the more-effective punches. As the bout progressed into the later rounds, Mayer closed the distance between the two fighters, allowing her to connect more repeatedly to the head.

A lead overhand right momentarily stunned Han in the opening seconds of the eighth round, but Mayer did not follow up. Mayer hit paydirt again later in the round as a right hand staggered Han, but she was able to remain on her feet and fight back until the bell sounded to end the round.

Both fighters laid it all out during the final round, but Mayer landed the more-telling punches. After the final bell sounded to end the fight, both fighters embraced.

“I feel like I did a lot of good things in there,” said Mayer after the fight. “Her movement, I think, is what she does best and it throws you off. She gets her spacing in a little bit, so I had to throw her off and stay behind the jab. Coach Al (Mitchell) reminded me to stay behind the jab, set the right hand up. She would duck sometimes and make me miss. I started to go to the body. All in all, she’s a tough, durable girl. That’s why we chose her for this fight. We knew she would push me, but I feel like I did well.

“I wanted to get the stoppage. I felt like I hurt her in the eighth round, almost finished her. This is another reason why I’m advocating for three-minute rounds.

Mayer, a 2016 U.S. Olympian, is hoping to unify the division, but does have a back-up plan if that does not come through soon.

“I’ve been pretty clear that I want to go undisputed at 130 (pounds). (WBC titleholder Alycia) Baumgardner and (WBA titleholder Hyun Mi) Choi, I’ve been calling them out. I want (either) fight, but if they’re not going to give me that fight in a timely fashion, I’m game to go up and challenge the winner of (Amanda) Serrano and Katie Taylor.”