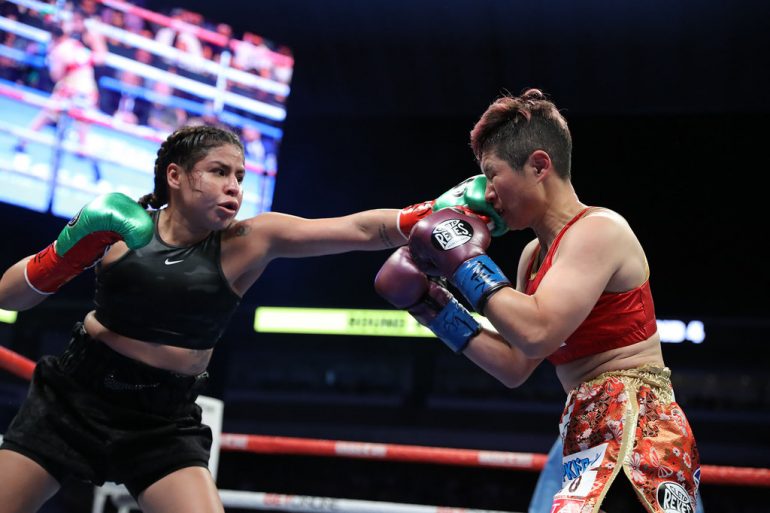 SAN ANTONIO – Japanese veteran Naoka Fujioka was a semi-pro softball player before she discovered boxing at an advanced age but she was pitching nothing but hard balls at Marlen Esparza during their WBC-WBC flyweight unification fight on the undercard of the Ryan Garcia-Emmanuel Tagoe main event at the Alamodome on Saturday.

Esparza (12-1, 1 KOs) took Fujioka’s hardest shots and countered with her best jabs, straight rights and counter punches for 10 competitive and entertaining rounds, earning a unanimous decision by two shutout scores of 100-90 (that are not indicative of the hard-fought nature of the bout) and a more realistic tally of 97-93.

Fujioka, a multi-division world titleholder who turned pro at 33, does not fight like a 46-year-old. She brings the ruckus non-stop, lobbing hooks and crosses with KO intentions. Esparza, who earned the inaugural Ring magazine 112-pound championship with the victory, says she was ready for the respected Tokyo resident’s aggression and power.

“She caught me with a big shot in the first round but I saw it coming so I was able to take it,” Esparza said. “She’s strong, her power is real. If she had a little more speed I think she would have been more trouble, but I was able to anticipate a lot of her punches.”

Making sure that Fujioka, who has won world titles from strawweight to bantamweight, could not anticipate her punches was key to Esparaza’s game plan and victory.

“My trainer James Cooper wanted me to be like a Rubik’s Cube,” said Esparza, a Houston native who won a bronze medal at the 2012 Olympics. “I was doing everything and anything that worked against her: letting her come forward, setting traps, shoving her off with my shoulder, switching up angles inside, slipping and hitting; I was constantly changing it up because I didn’t want her to get my rhythm.”

The strategy obviously worked, but it wasn’t easy. Fujioka (19-3-1, 7 KOs) was as relentless as advertised, but the gritty nature of the fight added to Esparza’s satisfaction.

It’s been back and forth for 10 rounds!! How do you guys see this historic unification bout between @Marlen112boxing and @Naoko_Fujioka 🔥🔥🔥#GarciaTagoe pic.twitter.com/uC3nr4Qpdt

“To fight a legend like Fujioka here in Texas, in front of a large crowd in San Antonio, and winning the first Ring magazine women’s flyweight title makes this the most significant victory of my career,” she said.

Esparza said she wants to collect the other sanctioning body belts (IBF and WBO) to become the undisputed champion, but a lucrative rematch with two-division titleholder Seneisa Estrada, the only pro fighter to beat her (via bloody technical decision in 2019), is also on the table and would either be make for a main event in Los Angeles or Texas or land on a major, pay-per-view level show in Las Vegas.

Fujioka still has plenty of fight in her at age 46 but will discus retirement with her team. Japan’s six-time Female Fighter of the Year has accomplished everything (and more) that she had hoped and dreamed to achieve when she turned pro in 2009. 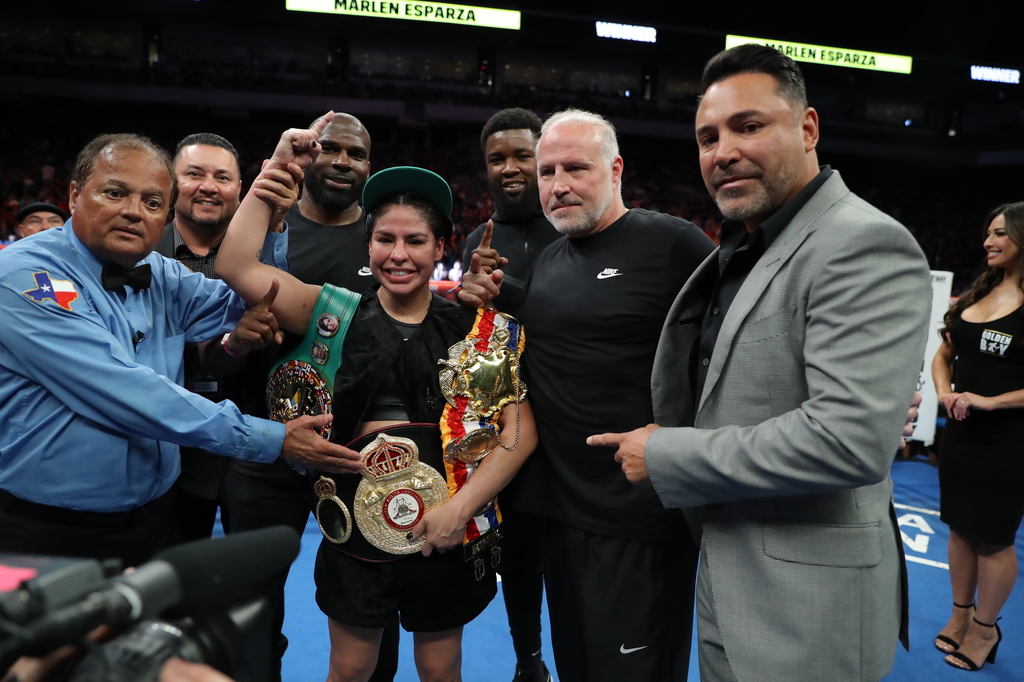 In the co-featured bout of the Golden Boy Promotions/DAZN card, Shane Mosley Jr. outpointed veteran Gabriel Rosado in a pedestrian 10-round super middleweight bout that elicited constant boos from the restless crowd, which did the wave multiple times to keep itself entertained until the final 30 seconds of the tactical fight when they let their hands go.

On the undercard, junior featherweight contender Azat Hovhannisyan (21-3, 16 KOs) made quick work of once-beaten Dagoberto Aguero (15-2, 10 KOs), knocking out the Dominican Republic native in the second round of a scheduled 10-round featherweight bout.

Young heavyweight prospect Tristan Kalkreuth (9-1, 7 KOs) shook off ring rust and bounced back from his first pro loss (and subsequent shoulder surgery) to knockout journeyman Santander Silgado (30-12, 24 KOs) with a beautiful straight right in the second round of a scheduled six.