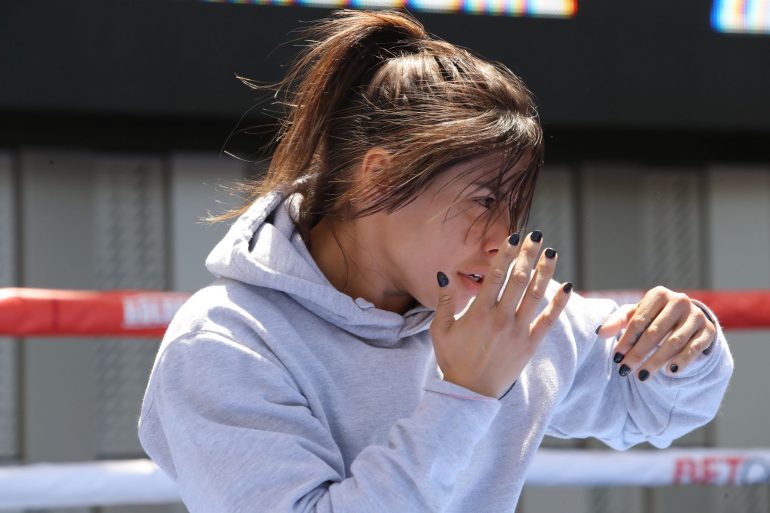 Marlen Esparza has accomplished many goals, but says winning The Ring championship would be top of that list. Photo by Tom Hogan/Golden Boy Promotions
08
Apr
by Ryan Songalia

Marlen Esparza has accomplished much in her two decades-plus in boxing, but she says winning The Ring magazine championship would be her greatest achievement to date.

“With The Ring belt, that’s saying I’m doing more than just winning fights,” said the WBC flyweight titleholder Esparza (11-1, 1 knockout). “It just solidifies what I’ve been doing my whole life and just reassuring that all my hard work is paying off. I would put it number one on my list so far, one thousand percent.”

Standing in her way is Naoko Fujioka (19-2-1, 7 KOs), the WBA titleholder whom Esparza will face this Saturday at The Alamodome in San Antonio, Tex. The two will compete for the inaugural Ring women’s flyweight championship on the card, which will be headlined by Ryan Garcia facing Emmanuel Tagoe in a lightweight non-title bout.

The show will be promoted by Golden Boy Promotions and broadcast live on DAZN beginning at 8 p.m.

Esparza has not been short on accomplishments in her career. She earned a bronze medal at the inaugural Olympiad where women were allowed to box in 2012, and a gold at the 2014 World Championships before turning pro in 2017.

Fujioka turned pro in 2009 and has won titles in four divisions, from 105 pounds to 118 pounds. Fujioka won her current title in 2017, stopping Isabel Millan in ten rounds in Japan. Esparza was among the DAZN commentators in Los Angeles for Fujioka’s last fight, a majority decision win over Sulem Urbina last July.

Esparza, who had convincingly beaten Urbina by decision in 2020, says she was able to scout Urbina some when she saw her up close in person, but knows that she must be prepared for anything against a top opponent.

“That was a good introduction for what she does and how she moves but I can’t say that I know what to expect because she is a champion for a reason,” said Esparza, who has been trained and managed by James Cooper for the past several years.

“I can jump to the conclusion that she’s gonna put pressure and try to be aggressive, but when someone’s been in boxing for that long and been a champion in different weight classes, you can’t really expect for anything other than for her to come to win.”

One factor that Esparza says she isn’t putting too much stock into is Fujioka’s age.

“I’m not even thinking about her age. I haven’t thought about it once. I don’t take that into account because she’s not moving like she’s that age, and that’s all I care about. She’s moving like she’s younger. As far as I’m concerned, her age has nothing to do with it,” said Esparza. 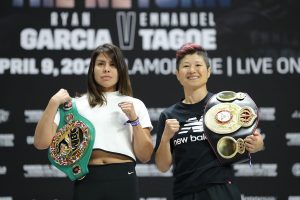 The fight is a three-hour drive from where Esparza grew up, and will be her third straight bout in her home state. Fujioka, who is making her first appearance in the U.S., says she doesn’t mind competing against an opponent who has the crowd on their side.

“It doesn’t matter to me that I’m in her hometown. I wanted to get a bigger name. I am here to represent Japan,” said Fujioka, who lost in two of her three previous trips abroad, against Susi Kentikian and Yessica Chavez.

While winning The Ring championship at 112 pounds would be a major accomplishment for her, Esparza says she still has other goals to accomplish, including avenging her lone pro defeat, a bloody technical decision loss to Seniesa Estrada in 2019, and unifying the rest of the flyweight division against the likes of IBF titleholder Leonela Paola Yudica (17-0-3) of Argentina.

“I may do a few bouts at catchweights but my goals are to get all the belts at 112. That’s my goal, defend it once or twice. I do have certain people like Estrada that I always wanted to get in the ring with and finish my career like that,” said Esparza.

Box2Grow, a project which empowers women in Colombia through boxing, is hosting a fundraiser to buy new uniforms for their boxers.

The Medellin-based project, which is run by Volunteers in Colombia, is looking to raise enough funds for 70 uniforms. Each uniform costs $28 USD, or €25, and includes a workout shirt and shorts, plus a pair of socks and shoes.

Box2Grow provides assistance to women from the impoverished neighborhood of Manrique La Honda. The women, who often come from physically and sexually abusive environments, also undergo social and emotional skills training, and participate in lessons about women’s rights, self esteem and relationships.

Founder Andrea Gonzalez says the women often work out in jeans or slippers, and that having uniforms will enable them to get the most out of their lessons.

Donors can buy an individual outfit with US dollars through Stripe or in Euros through Tikkie.