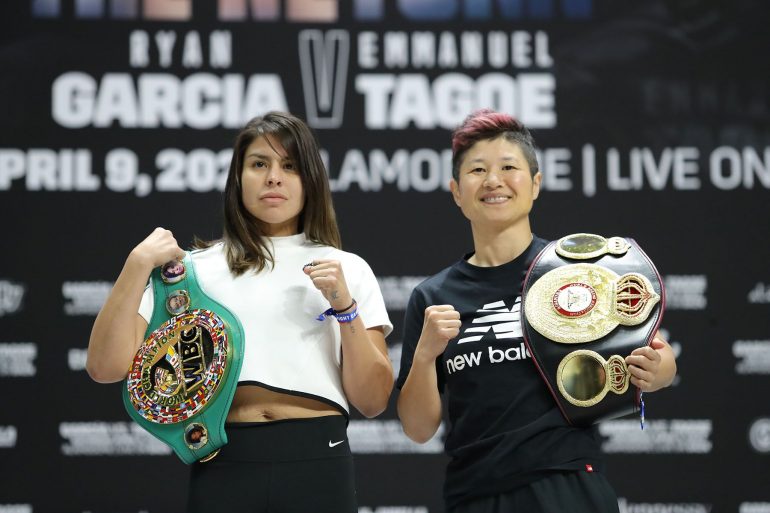 SAN ANTONIO – Marlen Esparza’s eyes lit up when she briefly held the ceremonial Ring Magazine belt that will be awarded to the winner of her WBC/WBA flyweight title unification bout with Naoka Fujioka on Saturday.

“This belt is my motivation,” Esparza said while backstage inside the Alamodome, minutes before she shared the stage with Fujioka during Thursday’s press conference. “This is why I took the hard road. This is why I’m willing to fight the difficult and avoided fighters.”

The opportunity to become The Ring’s inaugural women’s flyweight champion is the culmination of a five-year journey that hasn’t been as smooth as many expected when Esparza, a decorated amateur and 2012 Olympic bronze medalist, turned pro in March 2017. 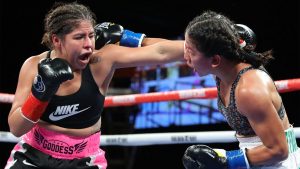 Esparza (left) rebounded from her loss to Seniesa Estrada by outpointing 12-0 Sulem Urbina over eight rounds in October 2020.

Esparza has had her growing pains and setbacks, namely losing a bloody, nine-round technical decision to Seneisa Estrada in her first scheduled 10-round bout on the 2019 Canelo-Kovalev undercard. Following her lone pro loss, the 32-year-old Houston native won consecutive bouts – including decisions over uneaten contender Sulem Urbina and respected veterans Ibeth Zamora and Anabel Ortiz in back-to-back 10-round title bouts – elevating herself to the No. 1 spot in The Ring’s female flyweight rankings, just above No. 2-rated Fujioka.

Zamora, a decorated former 108-pound titleholder from Mexico, was the defending WBC flyweight champ when Esparza challenged her in El Paso last June and she didn’t give up the green belt without a fight.

“That was the most difficult fight of my pro career,” said Esparza, who suffered a first-round knockdown en route to a tight split-decision victory. “I knew it would be a hard night but she was even tougher than I thought. Zamora was an avoided fighter for a reason. I knew if I could get through her, I knew I’d be ready for anyone.”

“I expected another difficult fight given Ortiz’s experience but it was easier than I thought it would be,” she said. “Going 10 rounds with Zamora, I felt it, the cardio it took to keep up with her, but the 10 rounds with Ortiz wasn’t as hard.

“I think I’ve finally picked up the professional style and pacing needed for 10-round bouts. After so many amateur bouts – and I stopped counting after 140 – it took a long time for me to get the ‘amateur (style)’ out of my system.” 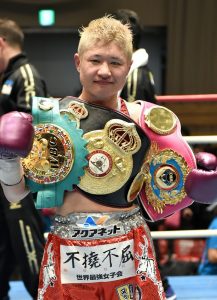 Esparza’s picked up the “pro pace” just in time because she’s facing a pros’ pro in Fujioka (19-2-1, 7 KOs), a well-traveled and battle-tested 46-year-old veteran who has won world titles in five weight classes – from strawweight (105) to bantamweight (118). She’s faced the best fighters of the lightest-weight classes in her native Japan, Mexico, Germany and the U.S.

Fujioka is known for her stamina and durability, as well as a somewhat unorthodox pressure-fighting style. Esparza was ringside (as a color commentator) for Fujioka’s most recent fight, a majority decision WBA title defense against Urbina in Los Angeles last July. Win, lose or draw – nobody has an easy night with Fujioka.

“I know how tough she is,” said Esparza. “That’s why I’ve wanted tough fights. That’s why I wanted to fight Sulem before my first title shot. That’s why I aimed for Zamora. That’s why I train to be ready for all types of aggressive styles.

“I know she’s going to bring it. I’m not fooled by her age. She turned pro in her early 30s. And I know she’s a better boxer than she’s given credit for. She chooses her attacks and her punches well, she fights an aggressive fight because that’s what plays to her strengths – durability, punching power, physical strength.”

Esparza is known for her elite amateur experience, textbook technique and ring generalship, but she says she also likes to fight – sometimes.

“Some don’t see the aggressive part of my game, but I can be aggressive,” she said. “I do it all once I’m in the ring, I can box, I can be fast and set traps, and I can go toe to toe. I like to be aggressive, but I prefer to box when I can. Let’s be honest, nobody likes getting hit in the face.”

Fujioka doesn’t seem to mind it too much, which is why it’s probably a good idea for Esparza to mix a fair amount of boxing in with her fighting.

The Esparza-Fujioka fight will be the second bout of a DAZN broadcast headlined by lightweight contender Ryan Garcia’s return to the ring vs. Emmanuel Tagoe. The live stream begins at 8:00 p.m. CT (6:00 p.m. PT/9:00 ET) with a 10-round featherweight bout between Azat Hovannisyan (20-3, 16 KOs), The Ring’s No. 7-rated junior featherweight, and Dagoberto Aguero (15-1, 10 KOs).

Mosley, the son of hall of famer Shane Mosley, is a hardcore fan who literally grew up in boxing gyms. His love for the sport extends to women’s boxing, and he’s argued with his trainer – Bones Adams – that the Esparza-Fujioka fight was significant enough to be the co-featured bout of the Golden Boy promotion. Adams agreed about the championship caliber of the women’s bout but argued that Mosley’s and Rosado’s “name recognition” justified their fight’s placement.

“OK, OK, I hear what you’re saying, but if Esparza beats Fujioka and fights a rematch with Seniesa Estrada, that fight is going to be a main event,” Mosley said. “That’s going to be a hell of a fight.”