On this day: Marco Antonio Barrera defeats The Prince in Las Vegas 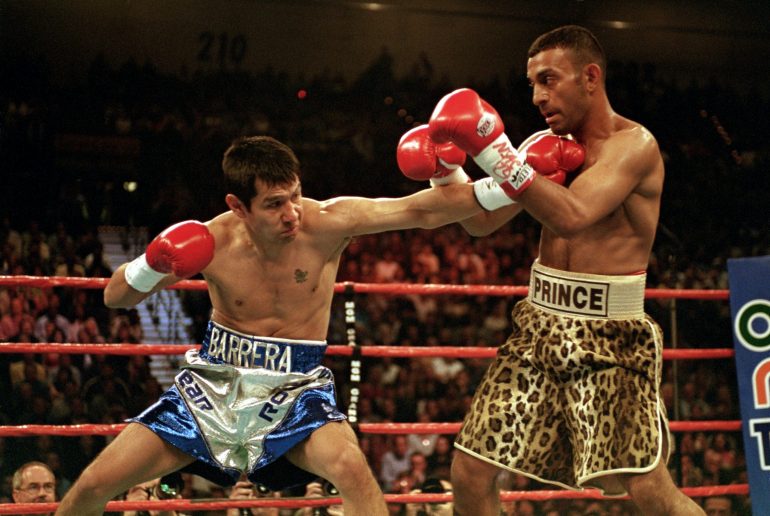 Marco Antonio Barrera and Naseem Hamed during their 2001 showdown in Las Vegas. Photo by John Gichigi /Allsport/Getty Images
07
Apr
by The Ring

Two opposing personalities. Two exciting styles. Two of the best pound for pound fighters in the world. One masterful performance.

On April 7, 2001, classy Mexico City star Marco Antonio Barrera scored a comprehensive 12-round unanimous decision over Prince Naseem Hamed at the MGM Grand in Las Vegas, handing the bombastic Englishman his first defeat in 36 pro starts. Official scores were 116-111, 115-112 and 115-112.

Barrera entered the bout as a 3-1 underdog despite being on red-hot form. A year earlier, “The Baby Faced Assassin” had fought the fight of his life against bitter Mexican foe Erik Morales and was deemed very unlucky to drop a split decision. He’d won three fights since and was fully confident of bursting The Prince’s bubble. However, the oddsmakers were clearly swung by Hamed’s power and unbeaten record.

Hamed, who was making his Las Vegas debut, was shaken up in the opening round and could never get a serious foothold. Barrera surprised everyone by imposing his boxing skills on the Sheffield-born power-puncher. The Mexican’s skillset and accuracy were dazzling at times, and even a final-round point deduction for bouncing his opponent’s face off a turnbuckle could not change the inevitable.

This was one of the finest showings of Barrera’s career and went a long way toward securing his position in the Hall of Fame. Hamed fought just once more, scoring a 12-round unanimous decision over Mario Calvo, before retiring at the age of 28.