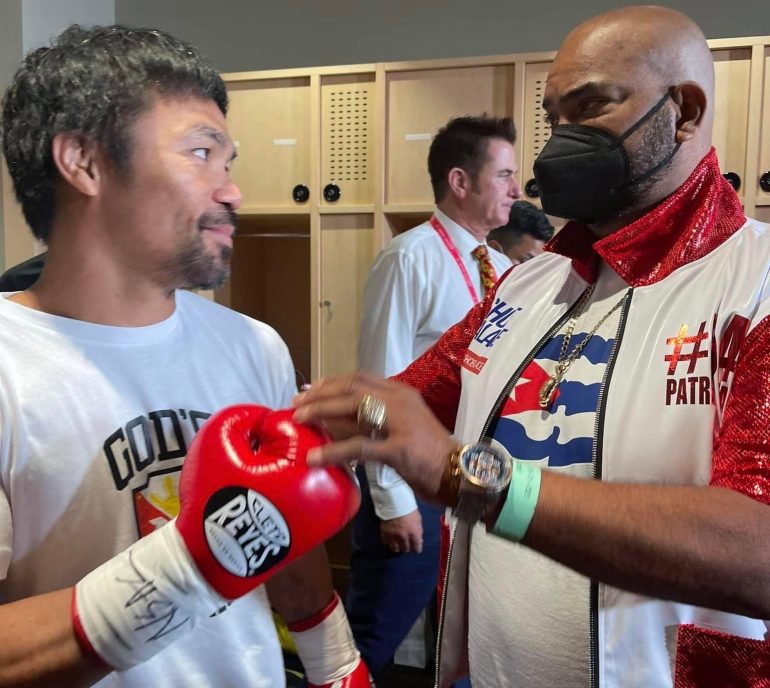 Butch Sanchez (R) inspects the gloves of Manny Pacquiao prior to Yordenis Ugas' upset win over the living legend in 2021. Photo from Sanchez's Facebook
02
Apr
by Ryan Songalia

Former pro boxers Terrance Cauthen, Shamone Alvarez and Jimmy Archer are among the 17 people who will be inducted into the New Jersey Boxing Hall of Fame’s as part of the Class of 2022.

The annual dinner and induction ceremony will take place Nov. 10 at The Venetian in Garfield, N.J.

Cauthen, a native of Trenton, is perhaps the most accomplished boxer of this class, having earned a bronze medal for the U.S. team at the 1996 Olympics in Atlanta. The now 45-year-old boxer competed as a professional from 1996 to 2012, compiling a record of 36-8 (9 knockouts) while facing the likes of Paul Williams, Ricky Quiles and Raul Frank.

Alvarez (21-6, 12 KOs) was among those who faced Cauthen as a pro. The lefty was a popular fixture on ESPN2 Friday Night Fights during the 2000s, drawing crowds at casinos in his hometown of Atlantic City.

Archer, 87, is the older brother of Joey Archer, who is better remembered as the last man to defeat Sugar Ray Robinson. The Bronx native Archer (26-8, 14 KOs) was a popular welterweight contender in the ‘50s, boxing out of venues like Madison Square Garden, St. Nicholas Arena and Sunnyside Garden.

Butch Sanchez, a Hoboken native, has been the trainer to a number of world champions, including Hector Acero-Sanchez, Andrew “Six Heads” Lewis, Carlos Tamara, Beibis Mendoza and, most recently, Yordenis Ugas.

In addition to the inductees, there will also be several awards handed out for Pro Boxer of the Year, plus Senior Amateur, Junior Olympic Amateur, Amateur Official, and Coach of the Year.

Tickets for the event are priced at $100 in advance or $110 at the door. The event begins at 6:30 p.m. The Venetian is located at 546 River Drive in Garfield, N.J. Tickets can be purchased by reaching out to NJ Boxing Hall of Fame President Henry Hascup at [email protected]