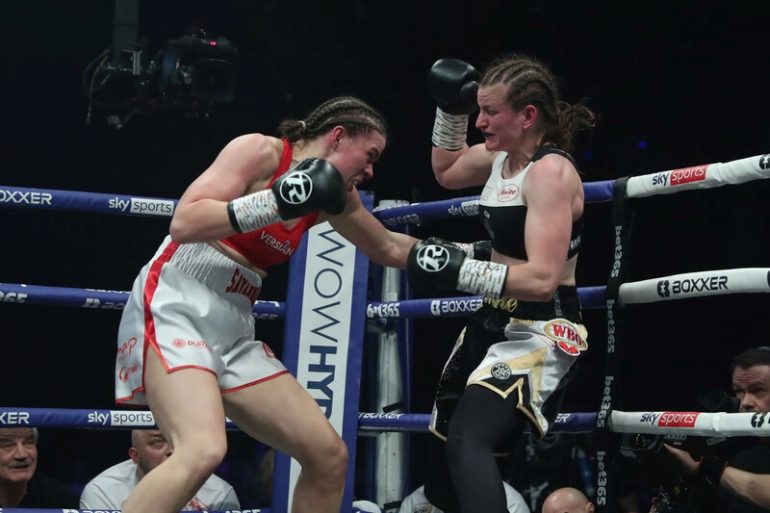 Marshall (left) on the attack against Hermans. (Photo by Lawrence Lustig/ Boxxer)
02
Apr
by Tom Gray

Unbeaten WBO middleweight titleholder Savannah Marshall set up the fight of a lifetime against the self-proclaimed GWOAT, Claressa Shields, by scoring a highlight reel third-round knockout of Belgium’s Femke Hermans at the Newcastle Arena on Saturday.

Marshall, who is rated No. 1 by The Ring at 160 pounds, behind champion Shields, had whipped over some dangerous looking right hands – her money shot – but it was a lethal left hook in Round 3 that put Hermans out cold. The official time was 2:59.

“I’m absolutely over the moon,” said Marshall (12-0, 10 KOs) during her interview with Sky Sports. “Femke is a brilliant fighter. She’s a former world champion and she’s awkward. I never go looking for the knockout – they just find me.

“There’s no one in the world between me and Claressa now. I’ll knock Claressa out. I believe I’ll hurt Claressa. I’m ready and it’s got to happen in the North East [of England].”

Marshall went through three minutes of reconnaissance in the opening round, but came alive in Round 2. Regarded by many as the biggest hitter in the women’s game, she came perilously close to scorning some huge rights in this session and the warning signs were clear.

Experienced and gutsy, the visitor never stopped trying, but there was no way Hermans could survive the flush left hook that took her out of the fight in the third.

“As much as [Marshall’s] got punch power, if that’s all I need to look out for, then it’s gonna be a wipe out,” was Shields’ retort from ringside.

The pair are being lined up for for a late-June or early-July date in the U.K. 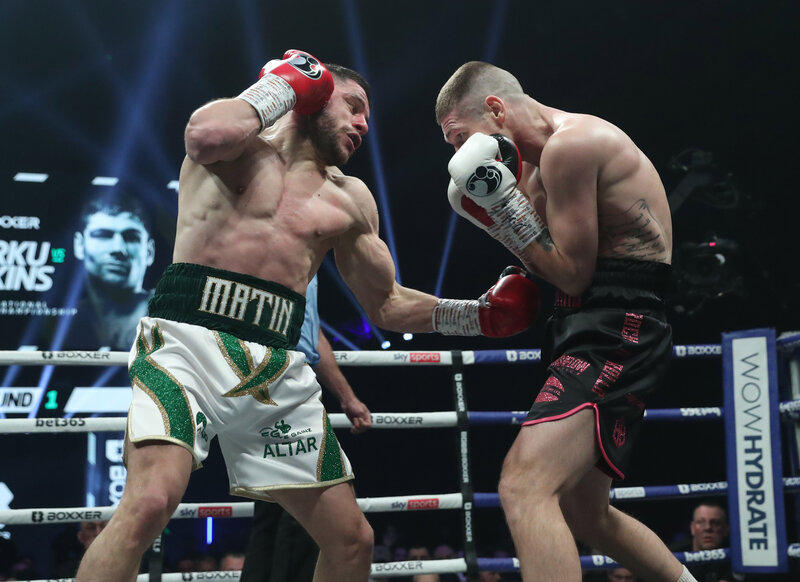 Jenkins got off to the better start, controlling distance and peppering his man with quick shots from the outside. Marku (11-0-1, 7 KOs) pursued from the orthodox stance, but he struggled to land cleanly against a quick moving target.

In the third, a clash of heads opened up a cut above Marku’s left eye and Jenkins then nailed him with a terrific left uppercut. However, there was a warning sign at the end of that session, when a Marku power shot caused the 33-year-old to buckle slightly.

Now boxing out of his natural lefty stance, Marku pursued with more intent in the fourth. During an exchange at center ring, the London-based Albanian scored with a heavy right to the temple and Jenkin’s legs dipped. He tried in vain to stay erect, but his equilibrium was shot, and referee Steve Gray had no choice but to stop contest.