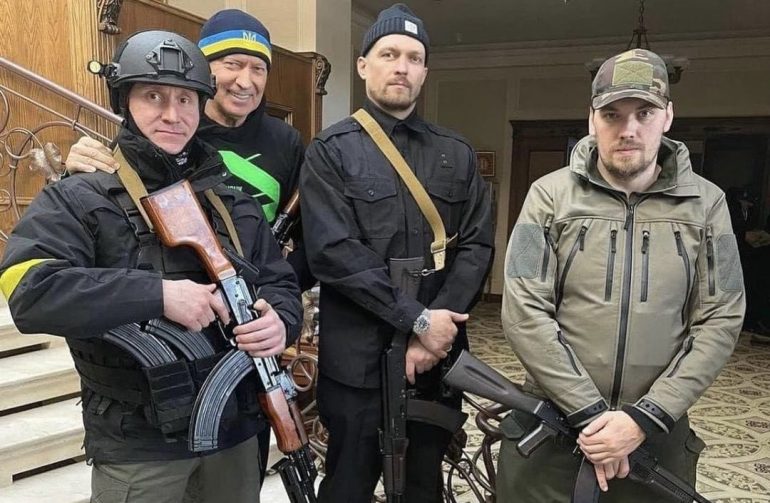 Talks have ramped up between heavyweight champion Oleksander Usyk and Anthony Joshua as they look to stage a return of last year’s meeting.

Usyk dethroned Joshua at the Tottenham Hotspur football stadium last September and has subsequently been part of the defence effort in Ukraine after Russia’s declaration of war.

Usyk put a video out this week saying he’s going to prepare to face Joshua again. “That’s how I will help my country more and it’s better than being in territorial defence and running around Kyiv with a machine gun,” Usyk said.

According to reports, Saudi Arabia could host the rematch with a date in late June the front-runner, said the Ukrainian’s promoter Alexander Krassyuk.

Of course, Usyk has had far more on his mind than boxing but defending his titles on the global stage is his way of bringing the conflict under a broader international microscope.

“It’s tragic,” said Mauricio Sulaiman, who hosted the WBC convention in Kyiv in 2018, of the conflict in Ukraine which has seen the Klitchsko brothers, Vasyl Lomachenko and Usyk all protect their country. “We have been following this situation with great concern, we have been receiving thousands of messages from the boxing world with absolute rejection of war and violence and absolute support to Kiev and Ukraine.

“I received a call two nights ago by Vitali Klitschko and we spent 20 minutes on the phone and it is a situation that we are all praying, hoping this ends soon because in 2022 nobody can understand how this is happening. There’s no room for war in the world. We are coming out of a huge pandemic that had an effect on everyone and now this war, and seeing innocent people die, is unacceptable.”

Many have wondered whether Russia’s WBA light-heavyweight champion Dmitry Bivol should be allowed to fight Saul Alvarez in May. Sulaiman said: “The WBC made a statement and the WBO and IBF work together in not sanctioning fights in Russia and not sanctioning Russian fighters for titles. I don’t want to express anything about a specific situation. I believe that the fighters, trainers and promoters from Russia are not the ones to blame for a war but this is a highly complicated matter with the sports world, Formula 1, FIFA, the IOC, all trying to make a statement. We hope war ends, that Russians go back home to their families, that an amicable agreement is made for peace, that’s our only position as the WBC.”